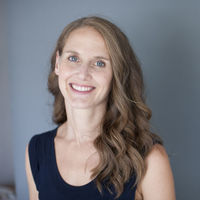 Famous for both courageously breaking barriers for women and her unsolved and mysterious-to-this-day disappearance, there is much about Amelia Earhart to capture the imagination. But for Grace Porter, the protagonist of Lindsay Zier-Vogel's Letters to Amelia (Book*hug Press), the allure is more personal.

When newly discovered letters between Earhart and her lover Gene Vidal are released, library tech Grace is tasks with mining them for information. It's an ironic assignment for Grace, pregnant and abandoned by her partner of seven years.

As she loses herself in Earhart's love story however, finds herself writing her own letters to the long-dead aviator. As the release of revelations about Earhart's story loom, and Grace's pregnancy progresses, this unconventional love story reaches a fever pitch. It's a staggering, brilliant debut from Zier-Vogel, and we are excited to announce we will be welcoming her as our November 2021 writer-in-residence at Open Book.

We talk to Lindsay, who many know from her internationally acclaimed community artwork The Love Lettering Project, today about Letters to Amelia as part of our Long Story novelist interview and to introduce her just in time for her residency.

She tells us about Earhart's surprising Toronto connection that was particularly meaningful to her, shares the fantastic name of her writing group, and give us a glimpse of the epic (and epically fast) research trip that brought Earhart to life for her.

Be sure to check out Lindsay's original postings throughout November on our writer-in-residence page. 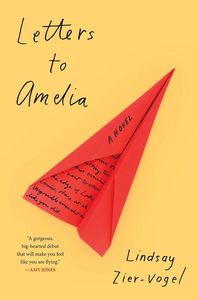 I read a biography about Amelia Earhart in 2002-ish and though the book was terribly written, I was really taken with the parts of her life that weren’t often talked about—that she was a social worker in Boston in the ’20s, working with Chinese and Syrian refugees; that she was a career counsellor at Purdue University; that she was an editor for Cosmopolitan magazine; that she was a fashion designer when she couldn’t find functional clothes for women pilots. The public narrative of Amelia Earhart’s story focuses on her disappearance, and though I understand that fascination, it is such a disservice to her huge, extraordinary life. She was such a multi-faceted person, not just a pilot.

So many parts of her life were documented, but because she was a celebrity long before the internet, there were stretches of her life that weren’t public—the rumours of her affair with Gene, her “missing year” when she drove across the country with her mom. These “holes” in her narrative left me room to explore fictional what-ifs.

But I didn’t start Letters to Amelia then. It took me years before I actually started the novel. I had piles of letters I had written to Amelia, and had travelled to Newfoundland to see her airfield, and her ocean runway, but still had no idea what the novel could look like, or even really be about until 2017 when I was very pregnant with my second kid. Just days before she arrived, it all clicked into place.

Letters to Amelia was always going to be primarily set in Toronto, in part because I live here and love it so very much, and also because of Amelia Earhart spent time in Toronto, as a nursing aide during the First World War, at a hospital that is now the University of Toronto’s architecture building at Spadina and College. She was standing on the edge of Lake Ontario when she decided she wanted to be a pilot, and I love knowing that she walked the same streets that I walk, that she went to the same air show my dad dragged me to for years. I loved knowing that she had been here, in the city I call home, and that this is where she discovered her desire to fly.

It’d be too easy to say Grace, my main character, or Amelia Earhart, but I do love them both so much. But outside of them, I love Grace’s dad. I love that he gardens and sends Grace potatoes in the mail. I love that he swims and pickles carrots and knows all the names of the constellations. I love that he loves Grace so much and shows it by calling her to tell her about the weather.

I also love Jenna, Grace’s best friend. I think we all need a friend who is there for us when our hearts are broken, and convinces us that we can do hard things, even if we’re not sure we can. Even when Jenna is struggling, she shows up as much as she can for Grace, and still takes care of herself—I think that’s the very best type of friend there is.

My writing group, the Semi-Retired Hens, and most recently, a book club that invited me to join them for a chat about Letters to Amelia all love Patrick, the priest-turned-resident medievalist at the library Grace works in. There are even (joke?) rumours about some Patrick fan fiction in the works...

Research is one of my very favourite parts about the writing process. I love translating things I’ve gleaned into the fabric of a story, and I did quite a bit of research for the novel. I did a lot of Googling of Amelia Earhart photos, and the most formative for helping me find Amelia’s voice was a collection of letters she wrote to her mom.

I was also able to travel to Newfoundland to see Amelia’s ocean runway in Trepassey, and her airfield for her transatlantic solo flight in Harbour Grace (and am grateful for the research funding from Access Copyright Foundation). It was so formative for what was originally the opening of the novel (and ended up in the first quarter) and was one of the best trips I’ve ever gone on.

I also travelled to DC to see Amelia’s Vega, where, in addition to visiting the Smithsonian Air & Space Museum, I took a lot of notes about the popcorn vendors on the street, and the names of the chocolate bars at the airport shop. For the Toronto sections, I spent quite a bit of time at the Thomas Fisher Rare Book Library, interviewing John Shoesmith, the outreach librarian, and getting tours of the sub-basement and the mezzanine, collecting stories about undergrad students breaking cuneiform tablets, and figuring out how a rare book library works.

When I had written most of the novel, and was nearing the ending, I knew my main character, Grace, needed to go to Washington, D.C. to see the plane Amelia Earhart flew across the Atlantic. But I didn’t get any grant funding, and my daughter was a year and a half and I was still breastfeeding her. There were a million reasons not to go, but I decided to do it anyway and I did what Grace did—I went for a day. I took the first flight out, and the last flight home and it was so intense and so ridiculous, but seeing Amelia’s plane was truly extraordinary and made it all worth it. Seeing the sparkly gold stripe that stretches the length of the plane, and the angle of the propellor, the rounded edges of the wings—it was truly transcendental.

Letters to Amelia is dedicated to my beloved Nana Ruth and Papa Doug. They are two of the most important people in my life, and even though it’s been years since they died, I still think about them every day. My Nana Ruth always believed in my writing. She was so supportive and so encouraging and always told me she knew I’d publish a book long before it was even close to a reality. My Papa Doug was a pilot during the Second World War and I spent many hours of my childhood (and adulthood!) pouring over his flight log and asking him every question I could about it. One of my favourite stories was how my grandfather would fly his Tiger Moth over my grandmother’s house when he was in training, or training other pilots, to dip his wing “hello”. (Also how on the way back to the airfield he and a pilot friend would try to fly under the telephone wires). They would be bursting with joy to hold Letters to Amelia in their hands.