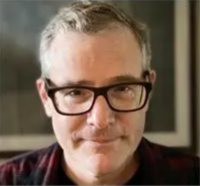 In unnamed luxury hotel, seven employees work quietly, unobtrusive amongst the rest of the staff. Nothing could be more ordinary. Except that these seven people aren't ordinary employees at all — they're deep cover agents, and a single code word sent to them will trigger a shocking assassination.

Written in the form of debriefing transcripts from the shadowy organization that ran the seven, Seven Down examines how and why each of these people came to be who they are, and to do what they've done. The story Whitton teases out will keep readers guessing, equally amused by the absurdity and spooked by the underlying darkness at the heart of this deeply human, entertaining, and unique literary debut.

We're thrilled to speak to David about Seven Down today. He joins us as part of our Long Story interview series for novelists and tells us about how the book allowed him to explore "a variety of nerdy fixations" (including numbers stations, the death of a Russian defector, and more), shares why the caterer at the hotel is his favourite character (and now ours too), and gives us the best "one sentence" description of a book that we've seen.

The first chapter, or interview, started as a short story. Like everything I’ve ever written, it was scrawled out in barely legible marks on lined paper in a state of confusion and low-level panic. I certainly didn’t know I was going to write a thriller, if that’s indeed what I made. I was just writing about a person caught up in a mysterious Pinteresque situation, full of menace and unease. What exactly was happening to this character would come to me much later.

I set the novel in a luxury hotel because Alexander Litvinenko, the Russian defector and former secret service officer, was murdered by Russian assassins in a luxury hotel in London, England. The killing of Litvinenko, who was poisoned with Polonium-210, a radioactive isotope that eats up your innards if you’re unlucky enough to swallow it, was a nerdy/morbid preoccupation of mine when I started the novel, in 2014. Seven Down really was an excuse to indulge in a variety of nerdy fixations: numbers stations, steganography, Havana syndrome, the rise of private “security contractors,” 90s indie rock, conspiracy theories. I guess I figured that if I was interested in this stuff, a couple of other people might be too.

It’s a story about toilet steaks; baby ducks; Glidden wallpaper designers; Blood Death Knights; Courtney Love; the North American Council of Churches; smoke breaks; the psychopathic capitalists and wealth-hoarders who have, under the directive of some mysterious death cult or their own mental illness, conspired to destroy our entire beautiful world; Beverly Hills 90210; hotel security systems; David Bowie; cocaine hidden in boxes of Honey Smacks; commuting on Toronto transit; anarchist subcultures; Soren Kierkegaard; and the lives of seven unwitting participants in a botched assassination attempt at a luxury hotel.

A global pandemic swept through various animal populations of the earth. The resulting governmental lockdowns, with their consequent boredoms and isolations, were a terrific boon to productivity. Bands recorded albums; actors filmed themselves singing inspirational songs; Nick Cave painted ceramic figurines; and I finished my book.

There were so many milestones, drafts finished, contracts signed, forms filled out, and they were all an excuse to smoke a bunch of cigarettes. Instead I urge-surfed, explored the contours of the craving, understood it for what it was, a transitory experience, simple passing weather, a chemical manipulation engineered by evil tobacco scientists, and after a few minutes it was indeed gone and I was fine.

The book is dedicated to one of my dearest friends, Jonathan Dewdney. We were tousle-haired teenage bohemians when we first acknowledged each other’s existence, at the front entrance of a repertory theatre in London Ontario, a thousand years ago. I forget what movie was playing, but I remember meeting Jon, who I instantly recognized as my kind of person.

When you get sick, as I did a few years ago, and are no longer delightful to be around, you can be sure that most of the people you’ve ever met will magically turn to dust and blow away on the breeze. The ones who survive this rapture, who check in and talk for hours and take you out for chicken and waffles or a tour of the Museum of Jurassic Technology and give you a metaphorical smack across the face and don’t let you wallow in your own dumb delusions are solid gold. I love him, he’s my brother, and I have dedicated Seven Down to him.

David Whitton is the author of The Reverse Cowgirl, a story collection. His short fiction has appeared in a number of journals and anthologies, including Darwin's Bastards, Best Canadian Stories, and The Journey Prize Stories. He is a graduate of the University of Guelph Creative Writing MFA program. He lives in Toronto.

In this quirky, character-driven debut novel seven hotel employees puzzle out the events of a botched assassination attempt — the next read for fans of Fredrik Backman (Anxious People) and Matt Haig (The Midnight Library).
Seven ordinary hotel employees. Catering, Reservations, Management. Seven moles, waiting for years for a single code word, a trigger that will send them into action in a violent event that will end their dull lives as they know them.
The event has failed: the action was a disaster. Each employee is being debriefed by an agent of an invisible organization. These are the transcripts of these interviews. What they reveal is not just the intricate mechanism of an international assassination, but the yearnings inside each of its pawns, the desperation and secret rage that might cause any one of us to sign up, sell out, and take a plunge into darkness.
Both sinister and absurd, Seven Down is a puzzle to be solved, a comedy, and a panorama of life. At once sociological, satirical, and scary, it paints portraits of the mundane human failings behind geopolitical machinations.