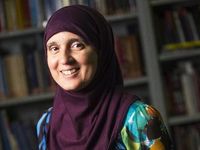 Monia Mazigh's Hope Has Two Daughters (translated by Fred A. Reed from its original French) is a powerful family story that covers not one but two revolutionary periods in Tunisian history. When Nadia leaves her native country in 1984, running from the violence of Tunisia's infamous Bread Riots, she never imagines that her daughter will return to the country 25 years later. But Lila does end up in her mother's home city, where she uncovers difficult truths about Nadia's young life. Amidst this personal journey, the Arab Spring erupts around Lila, changing the course of both women's lives, and the course of history.

We're thrilled to welcome Monia to Open Book today to speak about Hope Has Two Daughters. She talks to us about the quotation (from more than 1,000 years ago!) that inspired her memorable title, the mother-daughter bond that runs through not only this novel but much of her writing, and how the life of a dissident is different for women.

Both Nadia and her daughter Lila experience revolution and instability in Tunisia – one as a citizen and one as a visitor. How did you envision each woman's relationship with Tunisia?

Nadia grew up in the 1980s in Tunis. She never intended to leave her town. Even though she is a citizen, she never understood or lived the meaning of it until she found herself swept by the bread riots and that changed her life forever. But the revolution and more specifically the bread riots made her decide between justice and hypocrisy, between staying and leaving, between action and the status quo. She left reluctantly. Her daughter, Lila, is another reluctant character. She came to visit Tunis to please her mom. She took the opposite path of her mother. One left reluctantly and the other came reluctantly. Both would discover/rediscover themselves in Tunis. The images Tunisia where Nadia lived froze in her head the day she left. She wanted her daughter Nadia to see those old images but Nadia found other, live images.

How and where did you come across the Saint Augustine quote that you drew on for your title? The rest of the quote names the daughters of hope as "anger" and "courage" – do these refer to Nadia and Lila respectively for you, or do they each represent both concepts?

It was my editor who came up with this beautiful quote from Saint Augustine. I just loved it. It fits my novel perfectly. I wouldn’t assign a particular concept to each protagonist but definitely courage and anger fill this novel. There is a quest of justice all the way and both courage and anger are the main ingredients to this pursuit of justice. Moreover, Saint Augustine lived in Tunis, he is from North Africa and is considered as one of the fathers of western Christianity. These links, historical bridges and parallels between my novel, the events in Tunisia and the title are simply amazing and powerful.

How did you go about writing Nadia and Lila's mother-daughter relationship? How did their bond shape the writing process for you?

In my novels, I reflect and write a lot about the mother-daughter relationship. It is a complex and fascinating relationship. Nadia and Lila live similar events but separated by a long period of time. The book is an alternation of voices between the mother and the daughter. The daughter of today is the mother of tomorrow. Love, misunderstanding, resentment, caring, escaping, liberation: all these themes can describe a mother and daughter relationship and the novel explores them at length with Nadia and Lila.

Do you think the life of a dissident is different for a woman? If so, how?

Absolutely! In general, women are taught to be conformists and accept to choose the easy path and smooth careers. So when a woman raises her voice to say NO to injustice and dictatorship, that is really courageous and can only emanate from a strong will. During the Arab spring women joined men and took the streets to protest against oppression, nepotism, and injustice. In Tunisia, in Libya, Egypt, Yemen, Bahrain, Syria, women were present hand in hand, shoulder to shoulder with men at the early stages of the uprising but unfortunately, when it was time for elections, their male colleagues retook the balance of power and women were once again left behind.

What was you reading process like while working on Hope Has Two Daughters? Did you find yourself drawn to any particular texts or genres?

Usually, when I am in the process of writing, I try to avoid reading novels that are close in topics to what I write. Sometimes, I just read non-fiction to avoid being influenced in any way. I also switch between French and English. Since I write in French so I do a lot of reading in English and vice versa. Nevertheless, the writing process represents the digestion of all the previous readings. A sort of a slow-cooking process that culminates with the creation of a new book. So how much I try to be careful, I can’t totally distance my writing from my readings and one feeds the other.

I am working on a new novel about the life of woman who grew up in the last century in 1930s in Tunis under the French protectorate. I visit her passions, her sorrows, and her challenges. I would like to understand and discover how and where she can find strength in a society that gives little space for individuals and specially women.

Monia Mazigh was born and raised in Tunisia and immigrated to Canada in 1991. She was catapulted onto the public stage in 2002 when her husband, Maher Arar, was deported to Syria where he was tortured and held without charge. She campaigned tirelessly for his release. Mazigh holds a Ph.D. in finance from McGill University. She is the National Coordinator of the International Civil Liberties Monitoring Group. She has published a memoir, Hope and Despair, and her novel Mirrors and Mirages was a finalist for the Trillium Book Award in the original French.

Unwilling to endure a culture of silence and submission, and disowned by her family, Nadia leaves her native Tunisia in 1984 amidst deadly violence, chaos, and rioting brought on by rising food costs, eventually emigrating to Canada to begin her life.

More than twenty-five years later, Nadia’s daughter Lila reluctantly travels to Tunisia to learn about her mother’s birth country. While she’s there, she connects with Nadia’s childhood friends, Neila and Mounir. She uncovers agonizing truths about her mother’s life as a teenager and imagines what it might have been like to grow up in fear of political instability and social unrest. As she is making these discoveries, protests over poor economic conditions and lack of political freedom are increasing, and soon, Lila finds herself in the midst of another revolution — one that will inflame the country and change the Arab world, and her, forever.

Weaving together the voices of two women at two pivotal moments in history, the Tunisian Bread Riots in 1984 and the Jasmine Revolution in 2010, Hope Has Two Daughters is a bracing, vivid story that perfectly captures life inside revolution.