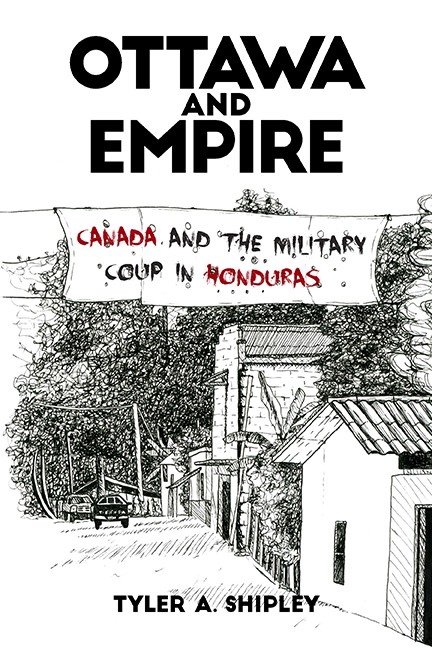 Our Open History series continues with Ottawa and Empire, from Between the Lines.

Ottawa and Empire (from Between the Lines):

In June 2009, the democratically elected president of Honduras was kidnapped and whisked out of the country while the military and business elite consolidated a coup d’etat. To the surprise of many, Canada implicitly supported the coup and assisted the coup leaders in consolidating their control over the country.

Since the coup, Canada has increased its presence in Honduras, even while the country has been plunged into a human rights catastrophe, highlighted by the assassination of prominent Indigenous activist Berta Cáceres in 2016. Drawing from the Honduran experience, Ottawa and Empire makes it clear that Canada has emerged as an imperial power in the 21st century.

This book was in some respects an accident. I was in Central America in 2009 when the legitimate and democratic government of Honduras was overthrown by a military coup and, like many people in the region, I was upset and wanted to help Hondurans reclaim their democratic rights. I went to Tegucigalpa and immersed myself in the protests that followed the coup and -- as I watched the military government attack protestors, enforce martial law, and essentially steal the reins of power away from the people – one thing really stood out to me. Canada was on the wrong side.

To most Canadians, and many people around the world, this wouldn’t make any sense. Surely Canada would stand up for democracy and freedom, and do whatever it could to help Hondurans re-establish the basis for functional and legitimate governance, wouldn’t it? Well, no. Instead, I watched as the Canadian government consistently sided with the military government in defiance of popular opinion in Honduras and, indeed, around the world. Explaining this seemingly strange situation became the focus of my book.

What drove you to write about this subject?

I suppose I answered this above, but I would add one other thought here. While I was compelled to explain why Canada would support a government that was attacking its own citizens, I think this project really got its inspiration from Hondurans themselves and their resistance to the coup government. Over many years of visits to Honduras, where I would meet with people from all sections of Honduran society, I was constantly impressed by the dedication of people to resist the regime and stand up for one another and their communities. As I detail in the book, the coup government wanted to return to the days when Honduran people and resources would exist largely to be exploited by the rich. But the vast majority of Hondurans have refused to allow this, and I was inspired by the courage of people facing threats, violence, even torture and assassination, but who continued to struggle for a better Honduras. Many times people asked me to “tell the world” what was happening in Honduras, and I take that responsibility seriously, coming as it does from such committed activists.

What were that challenges in capturing this topic through the chosen medium?

I suppose the real challenge with this sort of project is to construct an historical narrative that both 1) has the analytic capacity to explain complex political, economic, and historical developments, but also 2) makes the story personal, concrete, and real, for the readers. The story of Canada’s support for the Honduran military dictatorship is one that requires detail and analysis, yes, but it also requires that we empathize with the people whose lives are most directly affected by it. What is it like for Honduran women working in Canadian-owned sweatshops? How do they make ends meet? How do they support their families? Do they get angry? Do they fight back? What happens when they do? These sorts of questions are every bit as important as the broader political economic analysis, and I try in this book to blend the two as effectively as possible, so that the reader both understands the situation but also cares about it.

There is a profound lack of historical awareness among most Canadians, which I think is a statement that would surprise many of us. We imagine ourselves to be thoughtful and educated, in contrast to the perception of those ‘ignorant Americans’ to the south. But in truth, Canadians know very little about the real history of this country. Our first Prime Minister, John A MacDonald, was explicitly and openly a White Supremacist; our government during World War One authorized a police attack against peaceful demonstrators in Quebec who didn’t want to be forced to die in the trenches for the British Empire; our so-called peacekeepers left Somalia in disgrace in the 1990s after they tortured and murdered a Somali teenager. These are all important snapshots of Canadian history that rarely make it into “Heritage Moments” or history textbooks. I think we have a responsibility to grapple with our history – even and especially when it is unflattering – if we want to move forward in the 21st Century and claim to be part of any kind of “international community.”

What impact did this event have on current Canadian culture?

Sadly, Canada’s role in supporting a violent and anti-democratic coup in Honduras has gone almost entirely unnoticed in Canadian culture. This is no surprise, of course, as it doesn’t reflect well on Canada at all. But it speaks to that historical amnesia that I mentioned above. How can we know and own our history if we don’t even recognize what is happening in the present? This is Canada’s 150th birthday, and the Canadian government is making sure we don’t forget that. But maybe what we need are less celebrations and more sober reflection on what we have done and what we are doing. We are encouraged to be ‘proud’ of Canada, but if we don’t really know what Canada is up to, it seems odd to be proud of it. I would rather see us take a step back and think about what has gone wrong in Canadian history and what we can do to fix that. If we do that, then perhaps there will be more to be proud of in the next 150 years.

Tyler Shipley is professor of Culture, Society, and Commerce at the Humber Institute of Technology and Advanced Learning. He is an Associate Fellow with the Centre for Research on Latin America and the Caribbean (CERLAC). He has written for academic journals and local and mainstream media across North America and Europe.