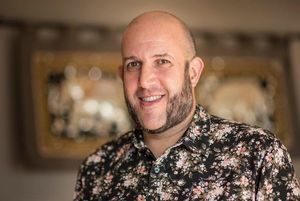 Duct-Taped Roses (Book*hug Press) is the newest collection from Vancouver poet Billeh Nickerson, and it firmly cements him as an unerringly insightful, witty, and poignant writer.

Filled with moments of heartbreak, family connection, and fracture, the collection takes its title from Nickerson's bush pilot father's habit of repairing his planes with, what else, duct tape. The theme of how things—relationships, people, trust, families—can be broken and to what extent those ruptures can be repaired runs throughout the collection.

Nickerson is known for his wit and word play, and he manages to combine those elements seamlessly with deep emotion throughout Duct-Taped Roses, including meditations on gay love and loss, and, most stunningly, in a long poem inspired by his relationship with his father.

We're thrilled to welcome Billeh to Open Book to talk about his journey as a poet for our Poets in Profile series. He tells us about why comedians like Joan Rivers and Margaret Cho have offered him poetic inspiration, how "Skies" (the poem about his father) took over 20 years to write, and why being a poet can make dinner party attendance complicated.

Hmmmm, it may seem unlikely to others, but it makes perfect sense to me: female stand-up comedians such as Joan Rivers, Sandra Bernhard, and Margaret Cho. I can still feel their comedic timing and pauses in my line breaks, even when I’m writing more serious poems. All three also understood/understand the four-way-stop of otherness, humour, taboo, and the surreal. That’s often the intersection I find myself visiting.

I’ve done all of the above. I tend to go where the heat is and see where my curiosity and wonder take me. I do find that I’m now prone—perhaps that’s not quite the word, maybe “drawn” is better—to longer meditations and takes on subjects. I still often write in smaller bits and fragments, but they feel like parts of a growing mosaic. Or maybe it’s more like a wall of polaroid photos that is both one particular moment, but a collection as well.

The sections in my latest book in some ways feel like smaller collections. There’s a lyric essay quality to much of the sections as I work through them. Having said that my favourite part of putting a book together is placing all my printed-out poems along the large hallway outside my apartment (thanks neighbours!) and seeing how they play off each other. The hallway is important as I have cats.

The best part of having a project is that more often than not you always have something to write about. When I wrote about the Titanic, there was always another passenger or crew member, and when I wrote about fast food culture there was always another customer or crew member. And that’s just the characters! There’s the ship and the mythology or the burger and the ordering rituals.

Some poems haunt you or at least the idea of the poem/piece/whatever. I much prefer it when I wake-up with a poem in my head and then just write it down. That’s not the usual process though. LOL. Some poems take months or years. “Skies”, the long poem meditation about my dad in my book, took me over twenty years to write.

I’m fine with waiting for a poem to show me how it wants to be. I’m not going to have a nervous breakdown if something isn’t working. Younger me would have been obsessed about particular poems. Older me doesn’t want to deal with that drama. Poets need to stop being so bloody precious.

Chantal Gibson’s “How She Read”. I love poetry that makes me look at the world or understand the world in a new way. This book is the best marriage between form and content that I’ve read in recent memory. And it’s so timely and necessary and devastating in its beauty.

I love experiencing the world through poetry-infused senses—the awareness of rhythm and sound and repetition and metaphor. I believe this to be a heightened state, not in a hierarchal way, but a more robust understanding. This can also be the worst thing as it can be isolating—or a dinner party killer. I’m sometimes guilty of listening to the rhythms of words more than the words or thinking about how much I liked the long O sounds in someone’s descriptions.

Billeh Nickerson is the author of six previous books, including Artificial Cherry, which was nominated for the City of Vancouver Book Award. He a past editor of both Event and Prism International, and co-editor of the groundbreaking anthology Seminal: The Anthology of Canada’s Gay Male Poets. He lives and works in Vancouver where he is the co-chair of the Creative Writing Department at Kwantlen Polytechnic University.

In Duct-Taped Roses, Billeh Nickerson shares heartbreaks and offers odes and elegies in reflections on family, community, life, and loss.

As a bush pilot, Nickerson’s father would duct-tape his planes to keep them flying. The poignancy of his relationship with his father is celebrated here in the long poem “Skies.” Other poems reminisce about love and the complex resiliency of gay men.

Through his signature irreverence, honesty and wit, Nickerson explores what can be repaired, what must be celebrated, and what—inevitably—is lost to time.