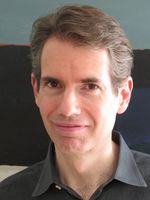 Halley's Comet, possibly the most famous celestial event in existence, and one which happens just once every 75 years, is a unique phenomenon. It has been dazzling onlookers for centuries, and its story is now available in a kid-friendly format in James Gladstone's Journey Around the Sun: The Story of Halley's Comet (Owlkids, illustrated by Yaara Eshet).

A great way to introduce kids to the wonders of the natural world – and build a foundation for a life-long love of science –Journey Around the Sun is also a fun history primer. The picture book not only notes interesting facts about the comet, but also checks in with what was happening on earth each time the fabled comet appeared. Bringing science and culture together, Gladstone asks what the world might look like in 2061, when the comet is next predicted to return.

We're excited to welcome James to Open Book today to discuss Journey Around the Sun as part of our Kids Club interview series where we speak with writers for young readers. He tells us about being just 16 when the comet last appeared in 1986, why a picture book's short word count makes it a challenging but effective format, and why it's so tough to choose his favourite part of writing each of his books.

My new book is called Journey Around the Sun: The Story of Halley’s Comet. A few years ago I pitched a manuscript about a different comet to Owlkids. Karen Li, the editor at Owlkids at that time, asked if I would consider writing something about Halley’s Comet instead. I thought that was a great idea. I had watched the last return of Halley’s Comet in 1986 when I was 16. I even wrote a song about it at the time from the comet’s perspective. (No, I won’t sing it for you.) And that’s why I decided to let the comet narrate this children’s book.

The research for this book gave me a broader view of humanity's relationship with this relatively small object orbiting the Sun. I hope that kids might come to recognize that they are part of the continuity of human knowledge and understanding. Everyone alive now is a link between our shared past and future.

The beginning and ending of the book mostly went as I originally thought. But the rest of the book was dictated by what I learned through research. I had fun with the writing, but I had to work with the facts.

Perhaps three things are most important to me for writing: time, space, and quiet.

I need time to research and develop an idea and not rush it. And it’s best if I walk away from a piece for a few weeks and play around with it in my mind. The ideas often become more interesting when I stop trying to force something onto the page.

I need space to walk around in my apartment or outside. I do a lot of revision of ideas when I’m walking (with a phone or small writing pad at hand to record my thoughts).

A quiet space to work in helps when I’m doing the actual writing and revision on a computer or on paper. But quietness can be unpredictable while living in a building in Toronto, so I often write at night when the world has somewhat settled down.

At times, I’ve heard people say that it must be easy to write a three- or four-hundred word picture book manuscript. Perhaps it is for some authors, but I’ve rarely found that to be the case. The fewer words I have to work with, the harder it seems to be. But I love the challenge of writing words around a visual story.

I once had an English professor who only ever assigned three-page essays. He said it’s more difficult to make a convincing argument in three pages rather than 20. After taking that class, I agreed with him. A picture book is not an essay, of course, but I think the point is relevant. It’s not as easy as it may seem to come up with a story idea and develop it into a short but meaningful manuscript—one that a publisher might want to turn into a book.

Inspiration is near the top, for sure. But I get so many ideas that wind up going nowhere. So perhaps my truly favourite part is when I realize I have an idea that I think is going to work and I can get on with writing the first draft. But the revision process is also rewarding. That’s when I can shape all the weak spots into something that I’m excited to pitch to a publisher. And since I write picture books, there’s also the part when I first see rough drafts of the art. I really like that part. I suppose I have a few favourite parts. Sorry. That’s why I keep writing these books!

I’m working on a non-fiction book with Owlkids about a supernova first seen a thousand years ago.

James Gladstone is an author of picture books for children, including When Planet Earth Was New, Earthrise, and Turtle Pond, which won the Norma Fleck Award for Canadian Children’s Non-Fiction. James’ latest book, Journey Around the Sun, follows Halley’s Comet on its travels through the ages. James lives in Toronto, Ontario.

Journey Around the Sun: The Story of Halley's Comet

Halley’s Comet tells its own history in this unique STEM bookHalley’s Comet, visible from Earth only once every 75 years, tells its own story in this unique informational picture book. With each return of the comet, the book highlights human life at that time, and how science has advanced toward a greater understanding of our universe.Told in minimal, poetic text paired with detailed captions for context, the book begins with sightings in ancient civilizations, where for centuries, the comet was a mystery recorded in art and writing. From Edmond Halley’s successful prediction of the comet’s return in 1758, through the advent of technologies like cameras and eventually a spacecraft that photographed its ice core, Halley’s Comet tells an inspiring and wide-reaching story of scientific advancement and cultural history.The book closes by inviting readers to wonder what our world might look like the next time Halley’s Comet is visible from earth, expected in 2061. What will the comet “see,” next time it passes by on its journey?