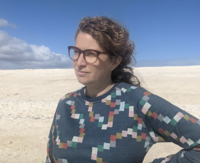 How does our human connection to the natural world change in a time of climate crisis? In Australia-based poet Talya Rubin's urgent (and spectacularly titled) new collection, Iceland is Melting and So Are You (Book*hug Press), questions of interconnection, identity, and understanding between human and planet are explored in stunning bursts of insight.

It's a timely and arresting sophomore collection from Rubin, who has previously won the RBC Bronwen Wallace Award and the TIFA Battle of the Bards, as well as being nominated for the CBC Poetry Prize and Montreal International Poetry Prize.

We're talking to Talya today as part of our Poets in Profile series, where we celebrate a poet's newest book by asking them about their formative experiences in poetry, from early favourites to strangest inspirations.

She gives a very thorough, relatable (and entertaining!) answer to the question of what poem she would love to have been to the one to write, tells us us about finding unexpected inspiration in news stories (like that of a funeral for a glacier), and explains how a strong poem can be "a bit like an ouroboros".

I think growing up in the house I did and having a mum who is very language oriented was a big influence. She is an actor and now a translator, and she has a set of my great grandfather’s collected works of Shakespeare that have gold leafing on the fore-edges. I remember how special those books were, sacred almost, like those objects made the person present somehow, and his love of language was also alive in the glowing, gold-leafed books. My mum had me cue her on lines from a Shakespeare play she was in (whose name I won’t dare mention) when I was very young. I think the language struck me, struck my ear and I was never able to let that go in some way.

It was probably Emily Dickinson’s “I felt a Funeral, in my Brain, (340)”. It struck me because it was so unusual compared to other poetry I had been exposed to up until then as a young teenager. It had different rhythms and seemed to describe an interior world in a way that nothing I had read or come across before had. I loved her exploration of the interior, and her boldness, and it made me feel as though I was tumbling through time and space and maybe was inside her brain and soul all at once. It felt impossible!

This is such a hard question. It’s the worst! Louise Gluck’s “The Wild Iris” sprang to mind first. And then Rilke’s “The First Elegy” from the Duino Elegies dashed in close behind. Seamus Heaney’s “Death of a Naturalist” then crowded in. And, finally, Charles Simic’s poem “We Were So Poor”... oh, but wait – Simic’s poem “Shelley” is also screaming for attention. So, I guess I wish I had written a hybrid of the most lyrical poem with an intense sense of belonging to and separation from the earth all at once, extraordinary language at its core, a connection to the natural world and the everyday, while embracing the absurd, that contains imagery that makes you gasp it is so right and so surprising!

Possibly, the news. I have found so much inspiration from news articles in this last collection of poetry. It seems so dry and dull and absolutely the opposite of poetry, but I would find treasures there. Animals thawing from the Siberian permafrost, a funeral for a glacier. It felt like the news had these kernels of irony and poignancy about the times we are living through. I found it fascinating to transform fact into something that could strike a deeper chord, be transmuted into feeling.

I usually start with a poem or two or three. And then they start insinuating themselves together, themes or threads start unfolding naturally. Once I recognise that is happening, I will then follow the paths that are presenting and do tend to write more poems that are connected in some way. But the process often happens from a whispering in the ear and an insinuation of the first poems that emerge. I’ve only written two collections of poetry so far, though, so anything is possible. The next one I am writing seems to have been born out of three poems that didn’t fit into the last collection, so that’s a really different way to start.

I will tend to shelve it and wait for it to emerge again, circle back to it. I find if a poem isn’t working, I am either approaching it the wrong way or it isn’t ready to be written or I’ve missed something essential about it. I will leave the poem alone for as long as I can and come back to it and explore what it needs. Sometimes it is a line or two buried inside it that can restart the poem, sometimes I need to abandon it entirely and get the idea down in a totally new way. It depends on what is not working, really. If I have not had the right approach or am forcing an idea on it, I need to wait and listen for the poem to find me.

I think they are quite linked, a bit like an ouroboros. They inform each other in a kind of circular totality. If the end is not right the beginning can’t work and if the beginning isn’t the right stepping off into the poem it’s near to impossible to reach the needed end. I suppose though, since a beginning is a launching into the poem it is more important in a way because it is the lens that a reader is seeing the entire poem through. But I do find endings often have more impact on how deeply a poem will land inside you, what ripples it has and what meaning it continues to hold over time. I think they talk to each other.

Talya Rubin is a Canadian poet originally from Montreal. She was awarded the RBC Bronwen Wallace Award for Emerging Writers from the Writers’ Trust of Canada in 1998. Her poetry has been longlisted for the CBC Poetry Prize and the Montreal International Poetry Prize. In 2015, she won the Battle of the Bards and was invited to read at the Toronto International Festival of Authors. Her first collection, Leaving the Island, was published in 2015. Talya holds an MFA in Creative Writing from the University of British Columbia. She also runs a theatre company called Too Close to the Sun, and currently lives in Perth, Australia with her husband and son.

Iceland is Melting and So Are You

Amidst the phenomenon of our changing planet, another exists closer to home: how the urgency of the climate emergency affects our ability to be human; to comprehend and to feel.

The latest collection from award-winning poet Talya Rubin explores the melting of ice sheets and the thawing of the heart. It offers recognition of, and salve for, the vast mysteries of our natural world, our human interior, and the relationship between the two.

Rubin interweaves explorations of the range of the human condition amidst depictions of nature. She shares moments of childhood ice skating and poems for unrequited love alongside glacial melts, geological formations, weather patterns. And there are moments where human and wild meet in minute everyday encounters: noticing spores outside a cabin; fathoming the weather while listening to news reports on the radio. Underlying the collection is a mild sense of absurdity, one that mirrors our existential absurdity of continuing on in the face of what feels like impossibility.

Iceland is Melting and So Are You, asks us what we have kept frozen and unexamined within us and—in doing so—recognizes the complex grief and wonder we face in considering the end of the human epoch.