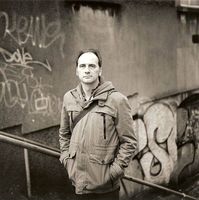 Canadian writers know Ottawa-based poet David O'Meara not only for his acclaimed collections but also his contributions to the community. From serving as the founding Artistic Director for VERSeFest to teaching at the Banff Centre for Arts and Creativity (amongst just a few of his many activities), O'Meara has been indefatigable in his work for Canadian poetry and poets.

He's back this season with the new collection Masses on Radar (Coach House Books), in which he grapples with the strangeness of midlife: the loss of a parent, the shifting of goals and expectations, the evolution of identity. Clean, swift, and often wryly funny, the poems speak to mortality and aging, that odd combination of the mundane and the existential that confronts us with the passing of time.

We're excited to welcome David to Open Book to talk about his life in poetry as part of our Poets in Profile series. He tells us about why it's important to "knock [the poems] around a bit" while assembling a collection, how the opening and ending of a poem speak to one another, and why he loves the poetry community in Canada.

It was probably a song. Nursery Rhymes count. The rhyming plight of all those Jacks and Jills stay with you, etched into your consciousness. A little older, I came across “The Listeners” by Walter de la Mare and was enraptured. Such romantic, graveyard stuff, full of words like “spake” and “smote,” but reading it now for the first time in 30 years, I can see how the central mystery and sense of lost communication would enthral my young mind.

“A Postcard from the Volcano” by Wallace Stevens. It has everything that needs to be said about time and existence.

The poems start and you cultivate. You can’t control your obsessions. You let them walk and knock them around a bit. A collection clinging too strictly to an idea or theme is straightjacketed. It doesn’t breathe well. A manuscript’s shape and subject should probably shift at least three times for it to be honest and dynamic.

Both. And everything in between. The opening should be gesturing to the end and the end should be thinking already about beginning while reaching for the emptying exhalation. But the poem doesn’t know yet. It should be surprised by what it says. It might change its mind. It should. It’s working if it says something honest in the middle. And seeks an indelible image and an unexpected word. It shouldn’t try to be a poem. It should just talk to you.

Natalie Shapero’s “Popular Longing,” for the reasons above.

I love the community. People trying to figure their shit out through words. It truly bums me out that I only meet or see some people once every few years at a festival or something. I want a grant that would cover my costs to live in each of all the Canadian cities for a year. I’d have some lovely conversations.

David O'Meara is the author of four previous collections of poetry, most recently A Pretty Sight (Coach House Books, 2013). He is the Director of the Plan 99 Reading Series, and was the founding Artistic Director for VERSeFest (Canada's International Poetry Festival). A past winner of the Archibald Lampman Prize and the Ottawa Book Award, David was recently the Poet-in-Residence for Arc Poetry Magazine and served as a faculty member at the Banff Centre for Arts and Creativity. He lives in Ottawa, Canada where he tends bar.

Words like radio waves, bouncing off the spectres of mortality, middle age, and the mundane.

Arriving at middle age was a decisive experience for David O’Meara, standing equidistant to the past and future with its accompanying doubts and anticipations, inviting re-evaluation of past goals, confronting personal loss, and the death of his father and friends. These are the masses on radar, indistinct but detectable existential presences encroaching, and in the center of the radar is the lyric 'I' sweeping its adjacent experience. Poems like "I Carry a Mouse to the Park Beside the Highway," "I Keep One Eye Open and One Eye Closed," and "I Sleep as the Volcano Ash Falls like Snow,” usher the reader through thematic corridors of memory, fracture, and recovery. Embracing uncertainty and incorporating seasonal forecasts, humour, trivia, satire, politics, the environment, loss, and the mundane, these poems are a detection system signaling a paradox of meanings.