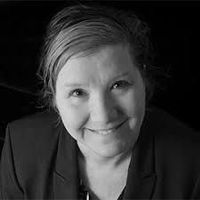 Poet and author Tanis MacDonald's newest collection, Mobile (Book*hug Press), delves into both the historical and modern experiences of women working and living in Toronto, casting their stories against a backdrop of oppression woven into the city's fabric. A feminist reimagining of Dennis Lee's Civil Elegies and Other Poems, MacDonald's fourth book of poetry navigates sexual politics amid the bustling noise and deep roots of a city in conflict with its own past.

We're thrilled to have Tanis on Open Book today to discuss how a previous life as a child actor revealed an interest in wordplay, the benefits of an over-arching theme, and why poets need to stick together.

I grew up in a family where we honoured music as a language beyond our understanding: a language we all loved, but one that none of us spoke. None of us played an instrument, and when I began to sing in my twenties, my parents looked at me like I had suddenly grown another head. (They weren’t wrong.) If I had been more musically-inclined, I would not have been so interested in words. So sometimes you can be “inspired” by a gap in your abilities: what you cannot do. But I was a child actor, and the more I stood on a stage and said words that others had written, the more I thought about how sounds make meaning and how words complicate what we think is meaning.

I’ve made collections out of a bunch of lyric poems that don’t seem to have a defining connection and written books around poetic sequences that shaped (or seemed to shape) the collection as a whole.  A longer series can impose a narrative or it can suggest that it is the key to reading the whole collection. When I’ve worked with longer sequences – as in my latest book, Mobile – there’s no doubt that a key sequence seems to offer a surer, more structurally certain way to proceed, imitative in some ways of a novel or a short story, and popular in art for the way this method touches down on these prose planets. But there’s no guarantee. I’ve had sequences fall apart and leave a hole in the centre of a developing manuscript. It is also true that whenever I believe that I’m writing individual poems, an overarching concern will voice itself and it will turn out that I’m writing a series without acknowledging that it’s a series. It can take me a while to recognize it, though I’m getting faster! Writing in short forms of any kind is a repeated act of faith: either a pattern will show up, or I will see a way to pull the collection together with an organizing principle. Poets have to believe that the small will eventually add up to the large even when it is not immediately apparent how that will work.

One of the advantages of poetry is that it has different a set of expectations than fiction; poetry can (and does!) take its time. (Every time I say that good poetry takes time, someone pipes up with an anti-example, like Milton writing “Lycidas” in two months.) My own impatience is sometimes the deciding factor in choosing to abandon a poem that isn’t working. Maybe it’s not the poem that isn’t working. It’s more likely to be me who is “not working”: not engaging with the work in a way that moves the poem forward, and so not especially functioning as a poet. One of the decisions I have to make is whether or not I want to work in the way the poem needs. Or whether I am able to, and if time will help that.

I just read Ali Blythe’s Hymnswitch and was pretty fascinated by his super-pared down language about life-changing moments, what it means to “have it both /exactly right /and exactly wrong” (from “Something Goes Here.”) Hymnswitch is starkly and rigorously present; it’ll shake you up! As I read, I toggled back and forth between thinking “Yes! Yes!” and “Wait: how did he DO that?” It’s a book that pleases as it astounds.

Sometimes people lose sight of their curiosity and goodwill, then we get older poets dismissing younger poets, men not reading women, settler writers not reading Indigenous writers or not valuing their work. It also happens when younger poets ignore the gains older poets have won – sometimes at great personal cost – for the community. The poetry community is often narrowly construed as being “owned” by very large cosmopolitan centres, when there is a ton of poetic work coming out of smaller cities: Hamilton, Calgary, Victoria, Winnipeg, Halifax. The poetry community is created by a global feeling: many people’s mutual devotion to what is – at this time in history – a weird pursuit. Poets are the original nerds. We talk about language and craft a lot, and at the best of times, everyone is united in not wanting to see the genre abused or neglected. One of the most useful things a poet can do to create community is to learn how to praise another person’s book with style and sincerity: to read it with good attention, to like it without envy, and to speak about it often, recommending it or talking about why it is fresh or different or a great example of some aspect of craft. Poetry ought to keep us curious, and changing, and awake. And in the best moments of the poetry community, we inspire each other to go further.

Tanis MacDonald’s memoir via instruction, Out of Line: Daring to be an Artist Outside the Big City, is now available from Wolsak and Wynn. Tanis is also a co-editor (with Ariel Gordon and Rosanna Deerchild) of the multi-genre anthology GUSH: menstrual manifestos for our times (Frontenac House), and her book The Daughter’s Way (WLUP, 2012) was a finalist for the Gabrielle Roy Prize. Her creative nonfiction has appeared in Tessera, Prairie Fire, Studies in Canadian Literature, Hamilton Arts and Letters, The New Quarterly, and in Far and Wide: Essays from Across Canada (Pearson), and in the forthcoming anthology Far Villages (Black Lawrence Press). She is the author of three books of poetry, with a fourth, Mobile, now available from Book*hug.

Mobile is an uncivil feminist reboot of Dennis Lee’s Civil Elegies and Other Poems; an urban lament about female citizenship and settler culpability; an homage to working and walking women in a love/hate relationship with Toronto, its rivers and creeks, its sidewalks and parks, its history, misogyny and violence. How do we, in Lee’s words, see the “lives we had not lived” that “invisibly stain” the city? What are the sexual politics of occupying space in a city, in a workspace, in history? How can we name our vulnerabilities and our disasters and still find strength?

Written in a slippery mix of lyric and experimental styles, Mobile is MacDonald’s grouchiest book yet.