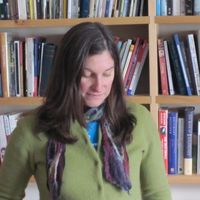 When a teenage Anita Lahey met her best friend Louisa in high school, their connection was immediate and powerful. From that day on, the two girls would spend their formative days navigating the pains and joys of adolescence against the backdrop of 1980s suburbia.

Making big plans for the years ahead yet always living for the moment, they forged a precious and unbreakable bond. When unexpected health issues took Louisa into a world of tests, hospitals, and treatments, however, they both struggled to accept that the future they imagined may be forever altered.

In her new memoir, The Last Goldfish (Biblioasis - publishing in June), Lahey takes us through the electricity of youth and friendship, as well as the sobering touch of mortality, with humour, grace, and heartfelt honesty.

Excerpt from The Last Goldfish by Anita Lahey:

On my jacket that night I wore a button with a single word on it: Believe. It was a gift from Lou. I’d pinned it on the wool coat I wore in winter, on my backpack in summer, and now on the jacket I wore in fall.

The pin was meant to be about Christmas. You know, don’t give up on it just because the whole Santa thing is a scam, and possibly the virgin birth, too. Its significance transcended the holiday because that word, for us, had become an overriding philosophy. Believe. In life, the world, yourself, the people you love. We made a habit of believing in things: it felt rebellious to resist the cynicism all around us. We put truck in fate. In unseen forces. In myth and its latent powers. Yet I find no model for the great friendship of my youth in the old stories and legends. We weren’t heroes or warriors. There was, in our tale, no passionate display of battlefield grief. No sacrifice of honour, family, money, freedom, or opportunity. No courageous offer to exchange one life for another, a profession of devotion so pure it might procure the mercy of a god.

At eighteen, in our final year of high school—in those days, high school in Ontario took five long years—Louisa and I were taking on the school board. It wasn’t as if we’d planned it. In our system, if you were able to maintain a course mark of B or higher, your teacher could exempt you from writing the final exam. As far as we knew, it had always been thus. You didn’t need to be a genius to have gotten this far in high school without ever having faced a final. I had never written one, and neither had Lou.

But not long into the fall term, kabam. We were told the exemption policy had been abolished over the summer. All students would write finals, no matter what. What followed was like what happens when some bozo at city hall decides to ban road hockey. Or when someone wants to tear down a historic fire hall—with its bright red garage and impressive hose tower—and replace it with a strip mall.

“I can’t imagine being here in June.”

“Do you have any idea how profoundly that will suck?”

“I start my summer job in June. I’m committed. And I need the money for school!”

“They could have warned us.”

Rants like this went on over trays of fries and lunch-hour games of euchre. One day someone said, “Are they allowed to do this without warning us?” Someone else said, “Can we do something about it?” One of those gazes passed between Lou and me. Later that day, when a classmate stopped us in the hall and said she had an idea, we barely let her finish her sentence before leaning in with ideas of our own.

Before we knew it, we’d helped launch a movement, an anti-final-exam brigade known as S.A.F.E.:  Against Final Exams. Our arsenal included a tight crew of fellow student allies and a few secret weapons (sympathetic teachers who coached us on the sly). We delivered roaring speeches—well, Lou did—littered the school newspaper with passionate opinion pieces, sent a petition around the cafeteria lunch period after lunch period. Finally, the school board agreed to consider our case. It was all very official. A presentation from S.A.F.E. was slotted into the agenda for the October board meeting. That meant us: Lou and me.

On the evening in question, I drove my mom’s emerald-green Pacer in rain-soaked gloom toward Lou’s. The Pacer was a small bulbous car our other friends called the Fishbowl. Sean, my older brother, revealing an initiative that I suspected wasn’t quite the sort my parents hoped for, had installed extra speakers, and a tiny racing-style steering wheel in place of the regular one. Driving the car made me feel slightly ridiculous in a way that I liked, but on this occasion, I was tense. I passed through the leafy suburbs along our polluted Great Lake, catching the occasional putrid whiff from the slaughterhouse in our end of town.

The second I pulled into Lou’s driveway, she rushed out the door and plopped into the passenger seat, clicked her seatbelt and nodded.

I was truly impressed. Usually when I was picking Lou up, I had to ring the bell and stand shifting from foot to foot in the hallway while she darted about looking for socks, lipstick, a scarf, all while bemoaning her latest dismal test results in finite math to her mom, who’d have just come in from work, or, if her mom wasn’t home yet, shouting at her brothers to remember to do their homework. And maybe the dishes. (That was wishful thinking.)

She was all business tonight, however. Her mouth was set in a grimly determined line—just how mine felt.

I swung theFishbowl out of the drive and guided it through the wet streets toward the squat brick building where we were to face the school trustees.

I didn’t want to jinx us with a careless move; I drove carefully, hands at ten and two. I kept glancing at my hands to make sure they weren’t shaking. No music. Neither of us spoke. We were armed with a three-page brief containing four appendices. Classes had ended hours before, but we still wore our neatly pinned kilts topped with white blouses and navy cardigans: the uniform at our Catholic high school. Had I known the Berlin Wall was a few weeks from crumbling, I might have felt encouraged: power to the people!

Or I might have thought, Look at us, a couple of spoiled brats half a world away, fighting our guts out against a few measly tests. Seriously?

But no. My sense of injustice was way too heightened to allow for such perspective.

I parked. The clock on the dash said 7:28 p.m. Two minutes to spare. Before Lou had come into my life, four years earlier, I’d never been late or even nearly late for anything. The floor of the bedroom I shared with my sister, Wendy, had yet to disappear beneath heaps of clothing and binders and magazines. I’d been orderly, reliable. Cautious. A child. The rain was now teeming. “Ready to run?”

“That’s ridiculous. If you run, you’re in it for less time.”

Louisa gripped the handle on the passenger door. “Let’s find out.”

When people talk about “dumb faith,” they don’t mean it’s stupid to have faith. They mean that faith, when it truly exists, equals clarity. A wordless knowing that I still remember and reach for, though I understand now that I really knew—and still know—next to nothing. I believe accepting that strange state of unknowing is what it means to grow up. I mean, I think I believe this. If I can claim to have grown up

at all, I haven’t come this way peacefully. I just wanted to stay in that land of possibility that Lou and I had made, a place where—maybe, if you stayed calm and focused—you could dodge raindrops. Or outrun them. (Or somehow a little of both.) I’m tempted to say that even now, some days are all about trying to go back there, or fighting the urge to return—but I’m not sure that’s true. I look at the teens and almost-teens in my sphere; I look at my own son, much younger, brimming; at my husband, siblings, parents, nieces, nephews; and, as intently as at all of these, at the friends I have now, and I wonder: What is possible, within these lives of ours? What might we make of them? Are any of us realistic about this? Maybe not, and maybe that is for the best.

I grabbed our documents, tucked them in my jacket, and bolted. Under the small overhang at the entrance I turned, dripping, to see Lou strolling through the parking lot. She was drenched. She held up her arms and laughed.

She took cover beside me, her glistening nose inches from mine. I shielded my mouth with my hands. I spoke through my fingers. “Are we really doing this?”

She took my elbow and steered me around. A raindrop swung from her nose. “We’re doing this.”

Anita’s memoir, The Last Goldfish: a True Tale of Friendship, will be released by Biblioasis in April, 2020. Her previous books include The Mystery Shopping Cart: Essays on Poetry and Culture (Palimpsest Press, 2013) and two Véhicule Press poetry collections: Spinning Side Kick (2011) and Out to Dry in Cape Breton (2006). The latter was shortlisted for the Trillium Book Award for Poetry and the Ottawa Book Award.

Twenty-five years ago and counting, Louisa, my true, essential, always-there-for-everything friend, died. We were 22.

When Anita Lahey opens her binder in grade nine French and gasps over an unsigned form, the girl with the burst of red hair in front of her whispers, Forge it! Thus begins an intense, joyful friendship, one of those powerful bonds forged in youth that shapes a person’s identity and changes the course of a life.

Anita and Louisa navigate the wilds of 1980s suburban adolescence against the backdrop of dramatic world events such as the fall of the Berlin Wall. They make carpe diem their manifesto and hatch ambitious plans. But when Louisa’s life takes a shocking turn, into hospital wards, medical tests, and treatments, a new possibility confronts them, one that alters, with devastating finality, the prospect of the future for them both.

Equal parts humorous and heartbreaking, The Last Goldfish is a poignant memoir of youth, friendship, and the impermanence of life.