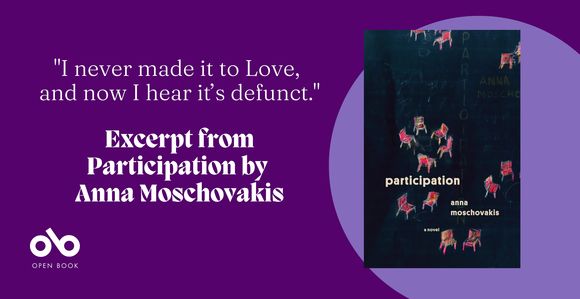 Living and connecting online has become a norm for most people, particularly after pandemic restrictions forced much of our work and social lives into the digital realm. In Booker Award-winning translator and acclaimed author Anna Moschovakis' new dystopian novel, Participation (Book*hug Press), this kind of online connection has become not only standard but its own new social frontier.

Moschovakis creates a world rocked by a mysterious climate disaster and ongoing political instability, in which two online readings groups have come to dominate: Love and Anti-Love. The anonymous communities convene and break apart, fervently follow tidbits about their most interesting members—including an individual known only as "The Capitalist"—and wait for fragments of "The News Reports", containing clues about the world in chaos beyond their screens.

Moschovakis mines the online setting for deeply human moments, creating achingly real relationships in a chilly blue glow. Her structural experimentation is fascinating and fearless, and her razor-sharp prose will keep readers racing through the pages of this strange, relatable, all-too-believable near future fable. Digging into themes of community, connection, love and sex, and much more, this is urgent, darkly witty, and essential storytelling from a singular writer.

We're sharing an excerpt from Participation today courtesy of Book*hug, in which we begin to get a picture of the two groups, Love and Anti-Love, and the strange and fascinating near future in which they operate.

Excerpt from Participation by Anna Moschovakis:

I never made it to Love, and now I hear it’s defunct.

At least I’ve done most of the readings.
Love, by contrast, will be a recuperation project.

Anti-Love is not, to be fair, billed as Anti-Love. It’s billed variously as resistance, revolt, revolution. Sometimes it’s billed (tentatively or defiantly) as Self-Love.

Love bills itself as itself, eponymous and proud.

Without the beginning of the story, it’s enough to know that there is a drafty corner apartment, an all-night bodega out the window, a playground across from the bodega, quiet at night. There is an abundance of emotion—enough years, enough fucks and near-fucks and pseudo-fucks, enough expectations unanswered because unheard or unsaid—and it is that abundance that is known: a partial knowing, as excess is always, paradoxically, partial.

Without the beginning of the story, it is insufficient but still necessary to have a picture of the surround: not only the bodega and the playground, but the news reports filtering up from the apartment below. The news reports appearing at the top right of the screen, a stack of small explosions, almost registering, then, compulsively, swiped away.

There is a stack of books—on a coffee table, for example. An archive of future attention, or else a morgue.

Love isn’t defunct, exactly. It’s been reduced to a virtual form of itself. Flesh into type, an assembly turned list. I enter it, when I enter it, through a screen.

Don’t be fooled by the present tense, the future tense, when they occur, which they will. This is a story about the past. It’s already over.

When I say that the story is over, I mean that a merger has happened, which is not to say an acquisition. (This is a story about two groups.) I am also insisting on the safety of storytelling, to protect myself, and you, from a certain pain.

Story is a safe emergency.

One of the members of Anti-Love is a psychoanalyst, a fact rarely mentioned in our meetings, though the language of this fact—safe emergency—edges in. The psychoanalyst is from Buenos Aires, where an hour of therapy can cost the same as a burger; as a result, a large portion of the population is in treatment.

We absorb such unverifiable facts from conversation, and they become a part of us, they become us.

(Without the beginning, it is also necessary to have a picture of the second surround, some 150 miles away: a table in a room that is open to the public, dirty floor, a radiator that leaks. A village view out the window: gas station, neon lights, small mountain just behind.)

How are we to know who started things? At its peak there were ten of us in Anti-Love; we’d sit around the improvised wooden table, peer at one another over mugs of coffee or of beer. The idea for the group came from me, I’ve been told, though I remember it as always having been there. Not always, in the strict sense. It appeared when I needed it: an acquired taste. Tonight I met a man who was beautiful and tall, who wore capitalism like a well-fitting suit. Anti-Love recognized him, shone a light. For example.

Love was different. You wonder if I have a story to tell. I was invited to Love. The way salt is invited to the early-winter road.

I was invited and I said Yes, I said Send me the syllabus, I said I am only partially fluent in your language. I was told I was welcome nonetheless. Meanwhile, the neighbours were setting each other on fire. California was also burning— actually burning. The neighbours, aflame, sat on their stoops, extracting the burrowed tick of love from one another’s skin.

You don’t have to believe me, but you can.

I can’t know what you believe.

I can offer you parable after parable, tale after tale.

I can tell you the one about Porous and Anemone, who came together over a shared sense of the word expectation. Anemone wanted things from Porous: a lack of friction mostly, but also small noises, an elbow extended into its vulnerability. Porous wanted everything to be decided (elbow in the ribs, far in). One day in the vestibule of one of their apartments, Porous had a change of opinion, which is not the same as a change of heart. The story ends there, with Porous leaking predictable tears, Anemone predictably backing out the door.

There is a theory of the psyche that claims life narratives are necessary to the formation of a coherent subjective self.

This theory has always terrified me. Maybe I’m afraid of stories. Or of selves.

Or maybe I confuse coherence with cohesion. The psychoanalyst once explained the danger of this mistake, of letting the left brain suppress what the right brain knows. The way we rush to make sense of things, invent airtight accounts, stories that follow. We depend on these unprovoked lies.

A cohesive story, the analyst clarified, may well lead to a desired result (we may get wrong why the bird crashed into the window, but the decals we put up save the next bird’s life).

When I was a child, I thought swooping sparrows were hunters, hoping to nest in my unkempt hair.

But coherence doesn’t come so easily, or have such immediate results. At this point in the analyst’s explanation, I began to disappear. My eyes and ears wandered, to a fly buzzing in a spiderweb strung between the radiator and the wall. A session of Anti-Love had just ended; the winter sun had dropped behind the mountain and the gas pumps; the street was empty and I was spent. I struggled to understand the challenge I felt: if cohesion was marked by false order, by a completionism that held chaotic truths at bay, then coherence (its corrective?) consisted of work I didn’t know how to do. What I recall about the distinction between cohesion and coherence is a feeling of desirous terror—or terrified desire—at the prospect of abandoning my attachment to the first before being able even to conceptualize the second.

What can be told, without inciting this terror? What kinds of stories, what narratives, invented or not?

Or are these the questions I’m training myself not to ask?

When dawn lifts itself over the corner apartment, the bodega glows. The playground waits for its portion of light. Late risers don’t know this, but there is always a moment, sometimes fleeting, when the clouds brim pink. In bed, angled toward uncurtained windows, I wait for it. When there are no clouds, the pink separates itself onto puddles, passersby.

I can’t know what has become me, what becomes.

Some strays can attach to anyone, over and over.

Anna Moschovakis is the author of the novel Eleanor, or, The Rejection of the Progress of Love and of three books of poetry, most recently They and We Will Get Into Trouble for This. Her translation of David Diop’s At Night All Blood Is Black (Frêre d’âme) was awarded the 2020 International Booker Prize. Raised in Los Angeles, she has lived in New York since 1993 and currently makes her home in the Western Catskills.

When environmental disaster strikes, binaries and certainties dissolve as members of two virtual reading groups reshape their lives, romances, and reality itself.

In the latest novel from Anna Moschovakis, two reading groups, Love and Anti-Love, convene digitally amidst political upheaval and undefined environmental catastrophe. Participation offers a prescient look at remote communication in a time of rupture: anonymous participants exchange fantasies and ruminations, and relationships develop and unravel. As the groups consider—or neglect—the syllabi, and connections between members deepen, a mentor in mediation disappears, a colleague known as “the capitalist” becomes a point of fixation, and “The News Reports” filter through in fragments. With incisive prose and surprising structural shifts, Participation forms an alluring vision of community, and a love story like no other.