Caroline van Rooyen's Any Girl (Mawenzi House) is the harrowing, fiery story of July, the unlikely 15-year old heroine who wages war on a rapist terrorizing her community and school. A survivor herself, it's not until she finds Andie—a classmate who has just been assaulted outside at a party—that the cold realization dawns on July that no one else is going to stop this monster.

Driven by her fire to avenge Andie, herself, and all the other survivors, and especially to protect other girls and women from being attacked, she sets out to take down a predator that even the police fear.

This remarkable debut is a searing, smart story of an underestimated vigilante carving out justice in a world that affords her, and girls like her, none at all. We're proud to share an excerpt from this novel here today, courtesy of Mawenzi House.

Here we meet July as she attempts to outwit the criminal element at her school, finds an unlikely ally, and takes the reader deep into the fear, tension, and constant, terrified strategizing that is the landscape of her life.

Excerpt from Any Girl by Caroline van Rooyen: 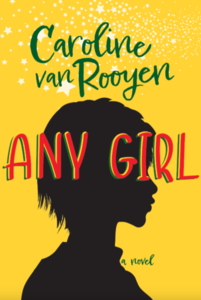 A tightly folded note lands on my desk. Annoyed, I flick it to the floor and kick it behind me. Trigger happy Mrs Horack is teaching and I don’t want a Friday detention. Within seconds the note reappears on my desk like a persistent fly—which raises the question: why is someone bugging me right now, demanding my immediate attention? Of course my mind flips back to last Friday, like a tongue finding the gap left by an extracted tooth, and my fingers tremble as I unfold the note and read.

I freeze, feel the glare of a spotlight placing me centre stage: this is a joke, isn’t it? I glance across the room at the usual clowns, the rugby boys, and try to catch the eye of their leader, David McNeil, to say he’s gone too far, but he has his head down on his desk with his eyes closed. If this was his set-up he’d be watching for my outrage or scared reaction, ready to lead the mocking laughter. Acid bile starts to rise up my throat as fear digs its sharp nails into my flesh. No! Don’t go there. They don’t know what happened. I study each member of that team, all fake sleeping until, hesitantly, I reach the last desk in that row.

Kevin Abbott sits low in his chair, hands thrust deep into his trouser pockets, eyes closed. Like a snake hiding in the grass, sensing my gaze he looks up at me, raises one eyebrow, winks slowly, then settles back down. He’s not a pretty snake. His cheeks are a rash of white zits, his mouse-brown hair is lank. Fortunately for him two cold sores prove that he has lips.

Terror sweat re-ignites the scorching net of cigarette burns and cuts that cover my body. I know it was Kevin who wrote the note. That makes the threat real. Kevin rigs drugs for Travis Richter. Travis Richter leads the school’s criminal gang, selling drugs, stolen goods and even examination papers. Last Friday night, Richter’s boys tossed me into the hands of a rapist.

I can smell the cigarette smoke, feel my flesh burning, and hear the words, “You’re picking them young. This one’s what, ten?” “No, an undersized fifteen.” They laugh; the short, harsh yips of wild dogs encircling a kill.

I’m shaking so badly my teeth clatter and click like cheap grandma dentures. I scan the door. Is it already too late? Are they out there waiting for me? How do they intend to do it, a knife, a bullet, or a shove over the balcony? I have to leave now. Legally, I can’t just get up and walk out of the school. I need a Permission Slip from the office. The office is a staircase and two quads away. That’s a long time to be a target. I can go AWOL, but if the school finds out they’ll report me to Child Welfare. Mom and I don’t want Child Welfare sniffing at our door, not now.

I nearly wet myself. Johnny Dunst looms over me, all muscle and blond buzz-cut, smelling faintly of soap and sweat. He plays prop for the under-sixteen rugby team and is the size of a barn door and a little less smart.

What is he doing at my desk? Is he my killer? I scoot up against the wall. This doesn’t get me far enough away. Why him? He never speaks to me. We aren’t friends.

“Want help?” he asks, stepping closer and reaching for my bag.

“No! Don’t touch me. Stay away!” With hands the size of oven gloves, he could snap my neck like a twig.

“Will you two please leave?” Mrs Horack calls from the front of the class. “My grade twelve group will be arriving any minute. And you’ll be late for your next class.”

“Yes ma’am, right away ma’am.” I stand up, forgetting to brace myself for the wave of pain that crashes across my body as my wounds pull, rip, and bleed. All the air is sucked out of my lungs. As I lean heavily on my desk, swirls and webs twist and glide across my vision.

I’m broken. How can I fight? I need a hospital, not a battlefield.

Mrs Horack says, “If you don’t leave now, I will send you both to the office.”

“That’s where I’m going. I’m sick,” I reply, stuffing my books into my bag, which I then use as a shield to push back Johnny. “Out the way, Johnny, I need to leave.” I’m a Yorkshire Terrier attempting to shove a Saint Bernard: unless it wants to move it won’t. Pan-faced, he takes my bag out of my hands and slings it over his shoulder.

Do I trust him? He’s not my friend, but he’s not my enemy. General opinion is that he’s too lazy to be mean. Does laziness also make you trustworthy? His father is a pastor. Why did that come to my mind? Nice parents can generate thugs. He’s a classmate, time is short, and I need help. I follow him out the door.

He calls to his friends, who are waiting outside. “Hey, David, tell van Zyl I’ve taken July to the office.” A roar of laughter erupts.

“Sure, okay,” David McNeil replies. “I’ll give him your message. It won’t help you survive if you don’t bring a late note.” David goes off, taking his group with him. Comments float back.

Johnny ignores them and looks back at me as if to say, “Come on, time is money.”

He makes a great bodyguard: silent and focussed. No chitchat. Slower traffic bulldozed out of the way.

Those foolish enough to consider us a newly formed Johnny-July duo will surely judge it a serious lack of judgement on his part. It is, because now Richter will train his sights on Johnny. Then again with all the school’s rugby teams on Johnny’s side, maybe it isn’t even an issue for him. I’m alone and my thoughts are swirling freely in my mind. Does Johnny work for Richter? Why would he? Richter sells drugs. Johnny doesn’t do drugs; he’s as innocent as a new-born hippo. So why is this giant helping me? Someone is pulling his strings. Will he demand a security payment from me? The only deal I’ll make will be in cash. I have money, but not on me right now.

We pass through the tunnel into the east quad and then slow down. In this quad with its staff room, the principal’s office, and the administrative offices, an adult is always watching. I feel safer already.

At the office door Johnny gives me my bag and leaves. It’s like he had a job to do and he did it. I’m confused and grateful. Pushing open the door, I head for the counter, determined to get permission to go home, where I know I’ll be safe. I want to stay alive.

“What’s the matter, July, you’re very pale!” Mrs Prince says, walking up towards me. I like her. She looks me in the eye as if I matter. My mom does that.

“My skull is about to explode. It feels like there’s a crazy rabbit trying to kick its way out. Please, may I go home?” To make my point, I push my fingers into the soft indentations just above my ears. It feels good. When I get home I will put a hot cloth across my forehead.

Mrs Prince picks up the phone. “I’ll call your mom. It’s probably the flu. Did you have your flu shot?” She waves the phone at me. “No one is answering.”

“She won’t. My mom’s a nurse. She can’t get to her phone. I take the bus home. They run every ten minutes down Lynwood Road. I’ll be fine. Oh, and yes, I had my flu shot.” I lean on the counter and run my fingers up through my thick brown hair, making it stand straight up. If looking pathetic earns me a ticket home, I win.

“Sorry, dear. Rules say your parent or legal guardian has to collect you. Why don’t you lie down in the sickroom?” Mrs Prince picks up a set of keys. All my plans slide sideways.

“No! Please, I just want to go home. There’s a bus in ten minutes. Could you ask Mr McNeil? I feel horrible.”

Mrs Prince pats my hand. “That’s why you need to lie down before you fall down. What if you keel over in the bus? Who will help you? I’ll ask Mr McNeil as soon as he’s free.” She reaches under the counter for a packet of headache tablets and hands me two and a bottle of water. “Take these for now. Keep the bottle. I’ll take you up. You look dead on your feet.”

I have to play along. Try again later. I don’t want her tracking down my mother. Slipping the stapler from the counter into my pocket, I follow. I need a weapon and it qualifies. If Richter sees me go up to the sickroom I will be dead on my feet.

British born, South African educated, Caroline van Rooyen’s Alma Mater is The University of the Witwatersrand, Johannesburg, Gauteng. As a high school teacher, she taught the full spectrum of classrooms from a wealthy Johannesburg all boys private school to a crowded, inner city Pretoria government school. She volunteered as a Crisis Intervention counsellor for Life Line International. In 1998 she moved to Canada, became a Canadian citizen, and had time to concentrate on her writing. In 2003 her short story “Heart Space” made the short list of the CBC Literary Awards. In 2006 “Across the Edge” reached the Top Ten of the Lichen Arts and Letters Preview, International Fiction Contest: Writing between the Lines. She lives in Beaumont, Alberta.

That she can stop a rapist never occurs to July Abraham until she falls over a classmate, Andie, in the gardens at Mark’s party. Finding Andie shatters the lie that silenced July. Now she knows this man attacks any girl because he can; people back away from him; bow down to him, even the cops leave him alone.

In the cold of that dark garden, with Andie unconscious in her arms, July resolves to stop him. She does not have wheels, friends, a fortified castle, or an AK-47. She cannot wage war. But she does know what parts of him look like, she can name the boys from her high school in his gang, and, unlike him, she has nothing to lose. If she protects even one more girl, her task will have been worth it.