Pamela Korgemagi's debut novel The Hunter and the Old Woman (House of Anansi Press) features a protagonist unlike almost any other. The titular Old Woman is not a woman at all — she's a cougar, living her life of hunting, raising her cubs, and protecting her wild, free, brutal existence from threats of all kinds. But a new threat, in the form of strange, two-legged creatures, means change has come to the cougar's territory. And these creatures' obsession with the cougar and her legend means danger is coming for the Old Woman. One man in particular, Joseph Brandt, has been fascinated by the legend of the Old Woman since he was a boy, and though she doesn't know it, he's on his way to find her.

Korgemagi's story is unique, sinking deep into the point of view of the Old Woman without romanticizing the brutal life demanded of a wild predator. An incredible debut, it's sure to be one of the fall's big books, and we're excited to present an excerpt from The Hunter and the Old Woman here today, courtesy of House of Anansi Press.

In this passage, we meet the Old Woman during an animal's most feared moment: an attack on her young. Tense and tough, it is a taste of Korgemagi's tight-paced storytelling and unflinching depiction of the merciless world in which the Old Woman lives.

Excerpt from The Hunter and the Old Woman by Pamela Korgemagi: 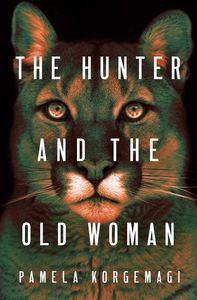 The Cougar stepped out of her lair into the cool dawn followed by her three cubs. As she passed from one shadow into the next the low light reflected off her eyes in weird, green flashes. She noticed a pronounced quiet in the forest around her. Then she heard the rustling of leaves behind her and turned to look. When she saw the lean, silver cougar stalking toward her through the grass, she knew it was too late. He could have struck while she was out hunting. She would have returned to her lair to find the cubs slaughtered and only his scent on the earth. Instead, he chose to come to her in the light of day, as she was leading her cubs out. He had chosen this moment among many. He had meant for her to see him. This was how she knew him as a harbinger of Death.

Her cubs stumbled against one another, the fur on their narrow backs bristling. The Cougar retreated, herding them behind her, and the Harbinger followed her for each step, head to the ground, level stare for her so she could not look away, only hiss at him to be gone. The Harbinger gave a scream that cut through the Cougar like ice water, and she responded in her own worried voice. He was an old cougar with yellow eyes, a pale face, silver fur along his sides. Though lean, he was not thin with age, merely pared down to muscle and bone from years of hunting. His hide was smooth and unscarred, with the exception of his tattered right ear. He reached out to catch the Cougar’s face in his claws, but she swatted his paw away with her own. She hissed, ears folded back against her head, eyes flashing. Her kittens would never outrun the Harbinger, and she was bound against leaving them. Though strong in her own right, she did not have the physical strength to defeat him. So while she knew she had already lost, she could not bring herself to turn and flee. The Harbinger reached out again, this time catching her shoulder with his claws. She felt the sting of air against her raw flesh, an unbearable touch. The Harbinger pounced and the Cougar rose onto her back legs to meet him. They stood wrapped in each other’s front legs, jaws open, each trying to sink a bite into the other’s neck, that vital passage. The Cougar struggled with the Harbinger, trying to get in, but both cats saw they did not have an opportunity and broke off from their embrace, swatting each other away.

The Harbinger rushed her again and the Cougar stood to fend off his attack. He nearly knocked her over, her feet digging into the earth, but she withstood him. The panicked hissing of her kittens sounded far away, though they were right behind her. The Harbinger twisted left, then right, trying to get his bite in. His teeth had been yellowed by age but were no less sharp. His breath was rank from the flesh of some kill he had eaten before coming to meet her. He reached up and grasped her head in his paw to pull her close, but the Cougar slipped out of his hold and jumped away. Alarmed by how close he had gotten, distracted with protecting her neck, the Cougar strayed too far from shielding her kittens, and the Harbinger took his moment, leaping past her and snatching the nearest cub in his jaws. The Cougar turned in time to see him shake the life out of the kitten. Then it hung like a dead snake from his mouth.

As the Harbinger pounced on the second kitten, the Cougar leapt to the third, snatched him up, and ran. When the Harbinger looked up from his work and saw that the Cougar had fled, he set after her. With the kitten clutched between her jaws, the Cougar ran into a field of tall grass, taking it in long strides, a true run, devouring the earth, her heart beating fast, heavy beats. A wind brushed the grass into waves. She heard the Harbinger in pursuit behind her, his feet pounding the ground. She saw the river through the trees, the bright water coursing between stony banks. When she came to the bank, she leapt. For a time her golden body held in the air parallel to the water’s surface, the kitten in her mouth curled up against the sensation of weightlessness, before she plunged into the river. The cold was crushing. Then she was treading water. When she broke the surface, the kitten mewed and fought to keep its head above the surface. The Cougar swam, breath coming in gasps. Behind her, she heard the Harbinger crash into the river. She was not halfway across and she was struggling. The current rushed against her, pulling her down. The kitten squawked and squirmed. She forced herself onward, sinking slowly as she went.

Pamela Korgemagi is a graduate of York University’s creative writing program. The Hunter and the Old Woman is her debut novel. She lives and works in Toronto.

The Hunter and the Old Woman

The intertwined story of a cougar and a man that portrays the strength, vulnerability, and consciousness of two top predators. Not since Life of Pi have we encountered such transcendence or walked so fully in the footsteps of a big cat.

The “Old Woman” lives in the wild, searching for food, raising her cubs, and avoiding the two-legged creatures who come into her territory. But she is more than an animal — she is a mythic creature who haunts the lives and the dreams of men. Joseph Brandt has been captivated by the mountain lion’s legend since childhood, and one day he steps into the forest to seek her out. A classic in the making, The Hunter and the Old Woman is a mesmerizing portrait of two animals united by a shared destiny.