His newest book, Every City is Every Other City (ECW Press) introduces a new protagonist, Gord Stewart, who is stuck spinning his wheels in suburbia when his widow father, for whom he's been caring, no longer needs him in-house. With time on his hands while working as an occasional film location scout (and part-time private eye), Gord agrees to help out a fellow crew member. Lana's uncle walked into a Northern Ontario forest and shot himself – according to the police. But Lana and her aunt are certain the uncle is still alive.

When Gord starts to share their suspicions, he has to ask a bigger question: how far should he go – and how much should he risk – to try to find a man who doesn't want to be found?

We're excited to share an exclusive excerpt from the newest work by one of Canada's most engaging mystery authors. Get a peek into Every City is Every Other City in this excerpt, courtesy of ECW Press, where we see Gord banter with Lana and a woman from him past as they try to puzzle through the mystery of Lana's uncle.

Excerpt from Every City is Every Other City by John McFetridge: 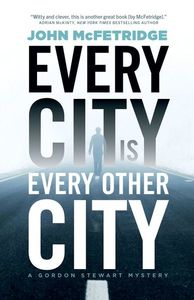 Lana said, “This is what you’re going to give to my Aunt Barb?”

“That’s what I want to talk to you about.”

We were standing on the sidewalk beside Lana’s office trailer. There were crew members clogging up the sidewalk and sitting on the hoods of cars and the stairways up to other trailers eating subs, the evening food break called “substantials” in the contract that tonight I think were actual subs.

“Do you think these guys out west could find him?”

“Maybe, but it wouldn’t be cheap.”

I said, “I don’t know, I think so, but there’s something else here besides the money.”

A woman’s voice said, “Who doesn’t want to be found? Ryan? How long are we going to be here?”

I said, “Lana, this is Ethel,” and I figured I’d have to say something about this being personal and I’ll see you later, Ethel, and then I’d never see her again, but then Lana said, “My uncle went missing and Gord’s been looking for him.”

“Aren’t you in Locations?” She was still in wardrobe, the yellow jacket with the sleeves pushed up and the shoulder pads and black leather pants.

“That’s what I keep telling people.”

Lana said, “He’s also a private eye. Has a license and everything.”

“Yeah,” Lana said, “and my uncle disappeared and Gord may have a lead on him.”

Ethel looked at me and said, “Did you really say ‘a lead’?”

Lana held up my iPad I’d handed her earlier to read my report and said, “The police called it suicide because his pickup was at the side of a road up north and they think he walked into the woods and shot himself, but Gord found some evidence that maybe he didn’t. Maybe he went out west.”

I said, “Evidence is a pretty strong word,” and Ethel said, “You think he pulled a Flitcraft?”

I said, “He might have, but I have no idea what that is.”

I said, “Of course, something from a movie.”

“It’s not in the movie,” Ethel said, “just the book. The Flitcraft parable.”

Ethel said, “Sam Spade,” and looked at me and said, “a real private eye,” and then looked back to Lana and said, “told the story about a guy named Flitcraft, who walked out of his office for lunch one day and never came back.”

“Years later, Sam Spade found him,” Ethel said, “in Spokane. He’d just started up another life pretty much exactly like the one he left.”

Lana said, “So that’s what Uncle Kevin did?”

I said, “I don’t know that they do it all the time. But that’s not really the issue here.”

I glanced at Lana, not sure she’d want to discuss family business so openly, but she didn’t seem to mind at all, so I said, “Well, what do we tell your aunt Barb?”

“What do you mean, we tell her this.”

“But your uncle didn’t just go out for lunch one day and not come back.” I made a point of looking at Ethel who seemed to be amused and then I looked back at Lana and said, “He wanted people to think he killed himself.”

Ethel said, “Why would he do that?”

“I guess so people wouldn’t look for him.”

Lana drank coffee and then said, “You really think that’s what happened?”

“So that’s what you’re going to tell Aunt Barb?”

I waited while a UPS truck went by and then said, “If you want me to.”

“It’s what you think happened?”

“Well then that’s what you should tell her.”

“Are you sure? What if she wants me to keep looking? Or what if she hires a real detective?” I motioned to Ethel and said, “Detective agency, like the ones in my report. They really know how to keep a fish on the line.”

Lana nodded and said, “I see what you mean.”

It was quiet for a minute and then Ethel said, “She has the right to know what you found out, for sure. It won’t give her closure because there’s no such thing, but it will help her decide what to do next.”

Lana said, “That makes sense.” Then she looked at me and said, “Why didn’t you think of that?”

“Maybe I was getting to it and I was just about to say it.”

Lana said, “You’re right, I should be there. We’re going late again tonight, we’re going to be sitting here for another six hours, we can go right now. Give me two minutes.”

Lana said, “OK, I’ll find you.” She turned around and walked up the three steps to her trailer office and went inside.

Ethel said, “The toughest part of the job.”

“I don’t usually deal with the clients,” I said. “I usually just hand in a report.”

Neither of us were moving and I wanted to ask her about meeting up later but I didn’t want to sound creepy or pushy, and then before I could come up with anything, Ethel said, “Well, I better get to makeup, I guess we’ll be going again soon.”

I said, “Yeah. Is Ryan Gosling any better with his lines?”

“I thought that was the character’s name.”

“You thought Ryan Gosling was playing a character named Ryan Reynolds in this movie?”

At that moment I wasn’t sure, but I said, “Have you ever see them in the same room together?”

“Yes,” Ethel said, “at the Academy Awards, everybody in the world saw them together.”

She said, “You keep working on it,” and gave my shoulder a squeeze as she passed me and headed towards the makeup trailer.

I thought that was good advice.

John McFetridge is the author of two critically acclaimed crime novel series: the Toronto Series and the Eddie Dougherty Series. He has written for the TV shows The Bridge and Real Detective. He lives in St. Catharines, Ontario.

Every City Is Every Other City: A Gordon Stewart Mystery

Behind the scenes, nothing is what it seems.

Gord Stewart, 40 years old, single, moved back into his sub­urban childhood home to care for his widowed father. But his father no longer needs care and Gord is stuck in limbo. He’s been working in the movie business as a location scout for years, and when there isn’t much filming, as a private eye for a security company run by ex-cops, OBC. When a fellow crew member asks him to find her missing uncle, Gord reluctantly takes the job. The police say the uncle walked into some dense woods in Northern Ontario and shot himself, but the man’s wife thinks he’s still alive.

With the help of his movie business and OBC connections, Gord finds a little evidence that the uncle may be alive. Now Gord has two problems: what to do when he finds a man who doesn’t want to be found, and admitting that he’s getting invested in this job. For the first time in his life, Gord Stewart is going to have to leave the sidelines and get into the game. Even if it might get him killed.