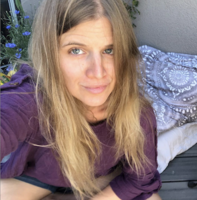 The young women of Erase and Rewind (Book*hug Press), the debut story collection by Meghan Bell, are funny, flawed, gutsy, and wonderfully compelling to listen to and witness.

From the story of a superhero's daughter questioning her father's neglect of his family to that of an assault survivor discovering she can travel through time, each piece showcases Bell's creativity, imagination, and clean, smart prose. The stories are also timely and bold, using fantastical premises to push against the reality of living as a woman in our times.

Championing women's stories and perspectives is nothing new for Bell, who served as the publisher of Room magazine, Canada's oldest and best known feminist literary journal, from 2015-2019. She also founded Growing Room Literary Festival, together with Arielle Spence and Open Book columnist Chelene Knight.

We're excited to share a short excerpt from the story "Nostalgia" from Erase and Rewind with you today, courtesy of Book*hug Press. It's a great peek into the work of a talented new addition to the CanLit landscape.

An Excerpt from "Nostaglia" from Erase and Rewind by Meghan Bell: 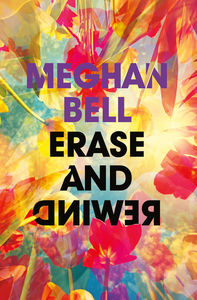 About halfway through my last summer at the pool, someone changed all the names on the shift schedule to Disney-themed nicknames. Flounder 3–9 p.m. Monday, Wednesday, Saturday.

Mufasa 9 a.m.–12:30 p.m. Monday–Friday. Dory 9 a.m.–3 p.m. Monday–Friday. I stood at the bulletin board, wrung pool water from my hair, and tried to guess who was who, while over on the cot Mark — the head guard — played Trivial Pursuit (All Sports Edition) with himself and got a hockey question wrong.

“What do you give up?” Mark asked.

“What’re my shifts this week?”

He rolled himself off the cot. He smelled of chlorine — we’d both jumped in the pool at the start of our shift to wash away our hangovers — and when he leaned over my shoulder and held a Trivial Pursuit card under a name, the hairs on my neck prickled like they anticipated a drop of sweat might fall from him.

“Aladdin, Tamara. The parrot!” He made a squawking noise.

It turned out that a couple days ago, I’d called the guard shack panicked about a shift I needed to switch ASAP because I’d forgotten my aunt’s birthday dinner. After Britt reassured me that she or Leah could cover the shift, they’d gotten off the phone and into a conversation about what a “spaz” I am. Mark had, naturally, piped up with his best impression of Aladdin’s villain, Jafar. So by “Iago” they meant, Calm yourself, Iago. This incident apparently prompted Mark to change “Tamara” to “Iago” and then to come up with nicknames for everyone else and change the whole schedule.

“Mulan is better than Aladdin,” I said.

“Psh.” He flicked my nose with the Trivial Pursuit card. “You wish you were Mulan.”

Mark and I worked at an outdoor pool at a private sports club in the third-wealthiest suburb of Vancouver, one known for attracting a lower calibre of lifeguard than the city pools because a) we were non-union and the pay was shit; b) the pool and its staff only worked three months of the year; and c) the only real requirement for employment besides the NLS certification was being the child of a club member. In three years, the most difficult “save” I had made had been talking a twelve-year-old camper through her first experience with a tampon. Once she came out of the bathroom, she was really embarrassed, so I told her how I had been scared to use tampons for ages because the first time I tried one it got “stuck in the hole.” She turned sunstroke-red, and when I followed her gaze and saw Mark in the entrance of the guard shack looking awkward as fuck, I turned sunstroke-red too.

I’d been in love with Mark since I was sixteen. Initially I thought I had a chance with him because he was a little funny- looking, the pinkish sort of white guy who always looked sunburnt, was thick-necked with a weak chin, and had eyes slightly too close to his nose. But it turned out many of the girls who worked at the pool saw the same things in him I did. Over the three years we’d known each other, he had fallen in love and broken up with four different co-workers, wholesome and quiet girl-next-door types who had probably never told a child about that time they’d gotten a tampon stuck in their vagina.

This was the summer of 2016, the first summer Mark had been single since we started working together. I was also single, fresh from a breakup with my freshman fling, who had taken my virginity and given me a new confidence with my body that I was keen to demonstrate. During our shifts together, our hips lightly touching, we joked about Mark’s most recent ex — who had cheated on him — and argued over which Disney movie was better: Aladdin or Mulan. Mark and I both had a bad case of nostalgia, so bad we romanticized not only our own childhoods, but decades of childhoods that had existed before our own. This trait made Mark glow: it drew children and women to him, made him seem like the perfect future father. On rainy days, when no one was in the water, we played Words with Friends and battled for dominance of the Pokémon GO gym that had sprung up over the pool. We’d both hacked the app download before it was available in Canada, so when it was released a week later we were able to recruit all the swim-team kids to our colours. Most of the kids went red with Mark, but some of the more competitive older kids had chosen blue — not to play with me, but to play against Mark, who they adored.

I’d thought that maybe he’d finally come around to seeing me the way I saw him. And then he’d gone and nicknamed me Iago, and it felt like the pool deck had fallen out from under me. It was pretty unambiguous: if you secretly want to see someone naked, you don’t nickname them after a hyper-anxious evil sidekick from a children’s movie.

From "Nostalgia", from Erase and Rewind by Meghan Bell. Copyright © Meghan Bell, 2021. Published by Book*hug Press. Reprinted with permission.

Meghan Bell is a writer and visual artist based in Vancouver. Her work has appeared in The Walrus, The Tyee, The New Quarterly, Prairie Fire, Grain, Rattle, CV2, and The Minola Review, among others. She joined the editorial board of Room Magazine in 2011, and was the magazine’s publisher from 2015-2019. During this time, she co-founded the Growing Room Literary Festival and acted as the lead editor and project manager of the magazine’s fortieth anthology, Making Room: Forty Years of Room Magazine (Caitlin Press, 2017). Erase and Rewind is her debut story collection. You can find her online at meghanbell.com.

An assault survivor realizes she can rewind time and relives the experience in order to erase it. A teen athlete wonders why she isn’t more afraid of death when the plane carrying her team catches fire. The daughter of a superhero ruminates on how her father neglected his children to pursue his heroics. Two shut-in depressives form a bond on Twitter while a deadly virus wipes out most of the population of North America.

The stories in Erase and Rewind probe the complexities of living as a woman in a skewed society. Told from the perspective of various female protagonists, they pick at rape culture, sexism in the workplace, uneven romantic and platonic relationships, and the impact of trauma under late-stage capitalism. Quirky, intelligent and darkly comic, Meghan Bell’s debut collection is a highwire balance of levity and gravity, finding the surreal in everyday life.