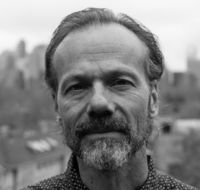 Winter is fast approaching, and for many Canadians that means bundling up, strapping on some skates and hitting the ice. From highly-organized leagues to friendly pick-up games on a local pond, our nation's love of hockey has endured for over 100 years. Governor-General's Award-winning poet Richard Harrison understands this well. His first love letter to the sport, Hero of the Play (Wolsak & Wynn), is currently celebrating it's 25th year in publication. To celebrate, Harrison has released 25: Hockey Poems, New and Revised (Wolsak & Wynn), a brand-new collection that explores the roles hockey has played in his own life as well as its ever-evolving place in our national conversation.

Warm, nourishing and effortlessly-evocative, the poems that comprise 25 find Harrison honouring hockey as a sacred pastime, uniting not only families but entire generations, its relationship to Canadians always changing but never far from our hearts.

We're very excited to share an excerpt from the book today, which you can read below.

TWO POEMS FOR EMMA, AGE ONE

1. Public Skating at the Olympic Oval

After 3 years’ absence, I’m back

on the rink. Right now, you are too young to

appreciate the irony of steel between

me and a Herculean pond where I forget

everything I ever knew how to do on skates – yes,

I lost all my body once possessed of soaring

a circular breeze among schoolchildren turning

and turning the untiring gyre of a truly Canadian

for the part of you from Britain and France, the part

to which we are supposed to bend in literature and speech,

this ice is the perishing of the world.

But here, where knees are bent on a frozen lake

to give power to the moving figure, this ice teaches, this ice

is the birth of play. Here are my hands. You reach up,

grab them and run the only way you know: head forward,

torso like a skater’s at the angle of falling,

working the carpet like a pair of foot pumps;

you are getting ready for this abandon, this disproportion,

and I, learning how not to think

of my body again and just go and go,

The puck is dropped. Naming begins: This is a puck.

There are only so many apologies,

so many startings over.

This is one, a baby at thirteen months saying, puh,

holding the flat, hard face to her face, her breath

sketching itself in the winter air against the new moon

in her mittened hand.

After confession and prayer, the slate is wiped clean

for the truly repentant. This is how I understand it,

how it is mocked by the lie and faith

reasoned in a circle.

The puck participates in both the sphere and the cube.

first rock. On this ice, I can teach something

about force and motion.

Every year the ice – new like the fresh page, conception,

has seen the light.

If the Earth were just that bit further from the sun

(say the planet was a human head, I mean

the length a hair grows overnight) it would be

This is the water upon which I build my church.

That which is old shall be made new –

and right before your eyes, to boot –

in scalding water, a spinning brush

and a Celtic love knot’s route

around the rink at a pace that says, There is no rush.

The stage is flat, and everything worth watching

will happen where Zamboni spreads the world

to all four corners of its map. Arena tractor, boxy

as a child’s drawing of a truck, it breaks the game

to make more game, and then departs by its

circus-elephant door. And there it is: before

the moment, serene in neither victory nor loss,

the time between the answer and its prayer.

Richard Harrison’s eight books include the Governor General’s Award–finalist Big Breath of a Wish, and Hero of the Play, the first book of poetry launched at the Hockey Hall of Fame. He teaches English and Creative Writing at Calgary’s Mount Royal University, a position he took up after being the Distinguished Writer-in-Residence at the University of Calgary in 1995. His work has been published, broadcast and displayed around the world, and his poems have been translated into French, Spanish, Portuguese and Arabic. In On Not Losing My Father’s Ashes in the Flood, Richard reflects on his father’s death, the Alberta Flood and what poetry offers a life lived around it.

Richard Harrison's The Hero of the Play has been in print continuously for twenty-five years, with a tenth anniversary edition released in 2004. 25 is a celebration of this fact, as well as a meditation on twenty-five years of hockey poetry. This collection is a cataloguing of the way the game has woven itself into the life of the Governor General's Award–winning poet, from childhood to fatherhood to death. It is a reflection on how the game has become such a large part of Canadian identity, shifting and changing with the times. In 25 Harrison captures the grace of the player in fluid lines, sketches the arc of the play and delivers the myth of the frozen pond to our human reality.