We're wrapping up our spotlight on excerpts this week with a glimpse into acclaimed author Richard Scarsbrook's new novel The Troupers, in which the Trouper quintuplets are raised by their overbearing father, a former child actor, to love film and theatre above all else.

Homeschooled in the (fictional) icon of Niagara Falls' entertainment strip, The Trouper-Royale Orpheum Galaxie Theatre, each quintuplet slowly rebels against their father's crushing pressure. As each of the Trouper children finds their own way amidst tragedy and triumphs, and their panicked father attempts to reassert control, the family hurtles towards crisis.

When the tension rises to a head in a physical altercation on stage, on the night of their collective 18th birthdays, the quints' bonds, and their future paths, are fractured in unexpected ways.

It isn't until twenty years later, when they uncover an unusual condition in their father's will, that they find themselves on stage together again.

We're excited to offer this excerpt, courtesy of Cormorant Books, in which we meet Errol, the lone son amongst the quints, as he recounts his chilling dreams of a pivotal event in the Troupers' lives. Rendered in cinematic detail befitting someone raised to see the movie theatre as their church, the section will draw you in to this story of an unforgettable family.

Excerpt from The Troupers by Richard Scarsbrook 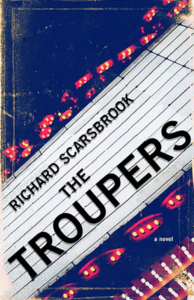 There are three variations of the dream. In the first version, I am driving the car. Everything is vivid, vintage Technicolor, all primary and secondary tones, as if coloured with a pack of grade-school crayons. The sky is Pacific Blue, and the paper-white clouds overhead are traced in Sunset Orange. The car is Basic Black.

I am as I was when I was eight years old, and Marigold is also the eight-year-old version of herself. Her hair is in pigtails, and she is wearing her angel costume with the gold satin wings. Our mother is as she was before her exile, calmly self-confident, regally poised, and naturally beautiful.

We are driving with the top down, the wind rushing around us in Periwinkle Blue streaks, laughing together, our voices slightly out of sync, half-harmonizing like three different versions of the same song, “HA HA HA.”

And then I am plucked from the car by the back of my shirt collar, gripped by what feels like the thumb and index finger of a supernaturally huge yet invisible hand. My feet dangle uselessly above the pavement as the car races forward without me, toward a curve in the Slate Grey road, and then it plunges over the ledge and down into the steep river gorge.

The invisible hand lifts me up higher so I can see over the cliff, its rough walls jagged lines of Eggplant Purple and Shadow Brown, as if scribbled by an angry toddler. Way down below, the banks of the river are thick scratches of Burnt Sienna edged with Pine Green. The deep, roaring water is a violent scrawl of Midnight Blue.

Then the invisible hand lowers me into the gorge so I can witness the car smashing down, collapsing upon itself like a toy accordion, its nose burrowing into the Tumbleweed Tan earth. My mother and my sister are thrown free, and they shatter into billions of tiny, complicated jigsaw puzzle pieces.

Frantically, I try to gather their fragments and put them back together, but I’ve only managed to join together two pieces of Marigold — and none of our mother — before the river overspills its banks and sweeps the rest of their pieces into its rushing, churning current.

I try to run into the water, but the phantom hand holds me back, and all I can do is watch as their puzzle fragments disappear under a thick layer of Midnight Blue.

In the second variation of the dream, everything appears in vivid black and white, with dramatic lighting and crisp-edged shadows, like a 1940s Hollywood movie directed by Michael Curtiz.

In this version of the dream, I’m flying.

I soar through the grainy, silver-toned air as if I’m swimming atop the calm surface of the warm, buoyant Dead Sea. Then I realize that there are Rolls-Royce Merlin fighter plane engines built into the palms of my hands and the soles of my feet, so I propel myself through the sky at a ludicrous rate of speed.

From high up above, I see teenaged Marigold behind the wheel of the Renault Floride, with our mother, as we last knew her, in the passenger seat. They are racing toward that fatal curve in the road, laughing together, oblivious to the danger, “HA HA HA.”

I blast through the air to catch up with them, accompanied by the announcer’s voice from a 1940s radio serial: “Faster than a speeding bullet... it’s a bird... it’s a plane... it’s Superman!” I execute a high-speed dive toward the zooming car, accompanied by the screaming sound of a diving warplane, like I’m Gregory Peck in Twelve O’Clock High.

Then I realize with a start that this is really the sound of Wile E. Coyote falling to what should be his death in a Road Runner cartoon. I slam into a repelling force like a sheet of unbreakable glass, and I lie flattened upon it in midair, motionless, unable to do anything but watch the Floride plummet over the cliff with Marigold and our mother inside.

The invisible barrier in the sky holds me against it like the gravity of a hundred Earths. My face is plastered against its transparent surface. It holds my eyelids open. It forces me to witness everything that happens next.

Echoing, cackling laughter surrounds me, like Vincent Price in House of Wax, as Marigold and our mother are swallowed by the river.

My other sisters have, at different times, suggested that I really should see a psychiatrist to help me sort all of this out, but honestly, I don’t think it’s necessary; I’ve read all of the relevant books.

In The Interpretation of Dreams, Sigmund Freud writes, “Dreams are the royal road to the unconscious” and “They completely satisfy wishes excited during the day which remain unrealized. They are simply and undisguisedly realizations of wishes.”

Carl Jung, in The Meaning of Psychology for Modern Man, states, “The dream is a little hidden door in the innermost and most secret recesses of the soul” and “Dreams are impartial, spontaneous products of the unconscious psyche, outside the control of the will. They are pure nature; they show us the unvarnished, natural truth.”

Henri-Frédéric Amiel says, “The dream is the reflection of the waves of the unconscious life in the floor of the imagination.” In my case, though, I suppose it’s more like the effect of a spotlight aimed at another actor, whose shadow darkens the floorboards of the stage upon which I am about to step out and perform... or something like that.

And I know I shouldn’t mislead myself by calling them dreams. They are nightmares.

The third version of the nightmare is probably the closest approximation of what may have actually happened that night; it bears the most resemblance to what the police officer told me on the veranda, anyway.

In the muted, impressionistic tones of a faded 1970s-era documentary film, our mother is already dead as the swollen river sweeps her body away from the wreckage.

But Marigold is still alive.

Her head bobs above the surface of the angry water, which hisses and bubbles like a cauldron about to boil over. Her backpack, with its sewn-on golden angel wings, is dragging her under, and she thrashes and twists to free herself from it.

I am frozen at the top of the cliff as she screams out to me, “Where are you, Errol? Why aren’t you here?”

Her backpack washes up onshore, and when I look back at the roaring water, Marigold has disappeared.

And this is where I am when, in the space outside the nightmare, the phone rings.

The TV flickers at the foot of the bed. The remote is still in my hand.

“And now,” the announcer’s voice intones, “the conclusion to the Classic Movie Channel’s Late-Night Triple Feature.”

I push the power button, and the room goes dark.

Atop the dresser beside my bed, the phone rings again. I see my sister Olivia’s name on the glowing call display screen.

As I grip the phone and push the talk button, I feel that supernaturally huge invisible hand pressing down on me, and in the pause before Olivia speaks, I think I know why she’s calling: Marigold’s body has been found at last, and I can finally, finally allow myself to let her go.

But it turns out that Olivia is calling for another reason.

Richard Scarsbrook is an award-winning author and screenwriter whose short stories and poems have been published widely in literary journals, magazines, and anthologies. Royal Blood, the first of Scarsbrook’s screenplays to be produced, won Best Short Film at the TIFF-associated Milton Film Festival in 2019 and his last novel, Rockets versus Gravity, was a National Post bestseller. Scarsbrook currently teaches courses in creative writing at the Humber School for Writers and George Brown College. He lives in Toronto, Ontario.

The Trouper-Royale Orpheum Galaxie Theatre is a jewel in the entertainment crown of Niagara Falls. At least, that’s what the marquee out front says. To the Fabulous Trouper Quintuplets their family’s old theatre is a thorn in the crown of their adolescent memories.

Under their famous-child-actor-turned-director father’s overbearing, and narcissistic eye, the quintuplets are raised on a strict diet of Golden Age entertainment and homeschooling to mold them into the best actors of their generation. But through a series of hilarious and tragic events, the siblings begin to develop their own personalities and ambitions, rebelling against their father’s aspirations for them. The tension rising from the quintuplets’ newfound individualism sparks an onstage brawl during a performance on their 18th birthday that changes the trajectory of all their lives.

Twenty years later, the quintuplets reunite for the reading of their father’s will and his demand for one last performance.