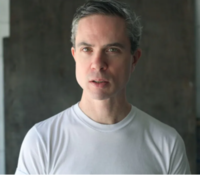 Writer and musician Rob Benvie's newest book, Bleeding Light (Invisible Publishing) defies easy description. It follows four people, seemingly unconnected to one another, through wild journeys both physical and interior. A ghostwriter, a teenager, a poet, and the son of an arm's dealer are each finely rendered, wonderfully strange, and desperately real on the page. How they're connected—and indeed, perhaps, how we are all connected—is the crux of this searing novel.

Benvie, who music lovers may recognize from his work with acts like The Dears and Thrush Hermit, pulls off fantastical twists and turns in a world that is both recognizable and just slightly off, where the mystical and odd weave through everyday life with aplomb. Often darkly funny, Benvie's storytelling is audacious and compelling, and anchored by a big-heartedness that makes this one of the most exciting books of the summer (a sentiment CBC Books confirmed in a recent list of hotly anticipated July reads).

We're excited to present an excerpt from Bleeding Light here today, courtesy of Invisible Publishing. Here we follow Jovena, whose missing brother hangs over her every move, and whose strange indifference to a cataclysmic event sets the tone for Benvie's surreal and fascinating world. 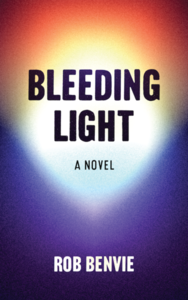 It might be a dream, but it feels like a memory. A teenage girl breaststrokes through rushing water. A starless sky stretches above. The shoreline behind her lit only with the staccato flickers of flashlights. Voices ring, calling after her. She swims away, treading through water where water shouldn’t be. The current takes her. She’s afraid of where she’s headed. The lights gradually diminish. She is alone.

Early on Monday morning, Jovena Hoedemaeker stepped out the front door of her house on Mitchell Street to find a man on fire staggering across her lawn. She watched as the man moved through the overgrown grass and across the concrete walkway, then stumbled into the empty recycling bin at the driveway’s foot. The flames lapped his clothes and his hair crackled like a barbecue pit, but the man himself issued no sound. On the street a car, a late-nineties Buick, surged with noxious smoke. From across the street three children watched, perched on BMX bikes. Jovena heard someone shout Get the phone! and a neighbour, a hefty ex-Marine, rushed forward with a wool blanket, tackling the flaming man with a smothering hug, yelling for everyone to stand clear. Jovena remained on her doorstep, holding her sweatshirt’s hood tight at her throat. Sirens echoed from down the block as an ambulance and PFD trucks stormed the scene. Medics rushed to ease the man onto a stretcher while firefighters doused the Buick with foam. Soon the flames were tamed, leaving little more than a blackened chassis. Jovena checked the mailbox, took a last look at the street, then turned back inside.

She’d hoped today’s mail might include something from Miguel, but there were only grocery store flyers, a plea from the Valley of the Sun United Way, and a Verizon bill addressed to her mother. The last piece of mail, or any message at all, she’d received from her brother now sat on the kitchen counter. It wasn’t actually a proper postcard, but a photograph he’d printed and stamped. It showed a taxi van on a crowded city street in what the postmark suggested to be Nairobi; emblazoned above the van’s windshield, fierce yellow text read We Be Jammin’. The message Miguel had inscribed on the card’s opposite side was brief, reporting that he’d recently returned to Kenya, was healthy and safe, was not in need of a money transfer, and pending visa details would hopefully soon be journeying to Mullaitivu, in Sri Lanka’s north, or possibly the Arabian Peninsula. Hit you back when I know what’s what, he wrote.

Jovena stood at the counter once again reading this message, drinking a mug of tap water. Weeks had passed since the card’s arrival. Typically, her brother emailed or texted at every possibility—even a quick yo, just to establish contact. Where Miguel actually, really, was at this moment was impossible to know. Jovena opened a drawer and dug out a Nexium tablet for her esophagitis, swallowed it with the rest of the water, and headed back to her bedroom. Outside the sirens began again.

Riding the 7th St. bus south to Mother Teresa High School to begin the first day at her new job, Jovena was nervous. She’d been informed by Alison, the administrative supervisor, that the work day began promptly at eight o’clock, so she’d given herself ample time to arrive early. Staring out the window from the bus, she felt queasy: ordinary first-day jitters, but also an unshakable sensation of being on display. It was a feeling of disconsonance, of accusation, as if while she sat there among the other commuters, something marked her as an aberration. At several points during the ride she feared she might have to exit early to vomit. But to her relief, the bus soon arrived at her stop and she was released.

The school itself was an unremarkable building of anaemic blue and beige, sided by a fenced-in basketball court and soccer field with portable bleachers. An undeveloped lot lay to the west, a range of patchy woods beyond. On her way to the main entrance, Jovena sighted coloured blotches out there, among the trees: students clustering before the morning bell.

After passing through the metal detectors, Jovena did as Alison had instructed, informing the security guard on duty who she was and the specifics of her appointment. The guard let her through without question. She moved through the empty halls, following signs for the main office. MTHS’s interior was much like any other public high school’s, at once austere and motley, the floor plan’s irregular rectilinear angles making sightlines confusing, walls still decked with the handmade banners and trimmings of previous semesters.

The office had yet to open, so she waited in the hallway. Taking a seat in a moulded plastic chair, she felt her nausea returning, and with it all sorts of creeping fears. She commanded herself to concentrate on the actual task now facing her: to make positive first impressions, to not wilt under scrutiny, to not let things go the way they so often did.

Alison finally came charging down the hallway, jangling a bulky ring of dozens of keys. She ushered Jovena into the office, where they ran through the HR paperwork and a refresher on the job’s varied priorities and duties.

Alison introduced her to Billie Yu at the front desk, with whom she’d be working most closely. Billie, evidently a veteran in her role, seemed like someone it would be wise to make an ally. Alison left Billie to show Jovena to her desk, a corner station outfitted with nothing but a computer and a laminated staff directory pinned to the wall. She was free to decorate as she chose, Billie said, pics of boyfriends or internet memes or whatever, to make it as homey as possible. The only limitation was the school had been designated a scent-free zone, so any air fresheners or perfumed doohickeys would be nixed. Jovena said that wouldn’t be a problem.

Werewolf, Jovena repeated back as she keyed this in. Why that?

I guess I kind of wanted to freak you out a bit.

Walking back from the bus stop, Jovena found Mitchell Street by late afternoon in its usual summer drowse. Rock radio played from down the block; somewhere, a motorcycle engine hacked and revved. The Buick was now gone, leaving a smear of black ash on the asphalt. A scab of charred grass traced the flaming man’s crossing across the lawn.

It was almost five years ago that this house became theirs—five years since their lives’ irrevocable alteration. From as early as Jovena could remember, she and Miguel and their mother had vaulted from state to state, maundering in debts and denials, settling wherever they could until circumstances inevitably tore them back into unrest: another Greyhound, another storage unit, another motel. The demons haunting their mother could be fled, but never escaped. Many a night she wept apologies to her children, sorry she’d led them into this life.

Rob Benvie is the author of the novels Bleeding Light, Maintenance, and Safety of War. His writing has appeared in McSweeney’s, Dazed, Vice, Joyland, The Puritan, CNQ, the Best Canadian Essays series, and been produced widely for film, music, and television. He has worked as a dishwasher, gas station attendant, rock ‘n roll musician, ghostwriter, soundtrack producer, screenwriter, credit ratings publishing specialist, and advertising “creative,” among myriad other humiliations. He has CanSail Level 2 certification. Born and raised in Nova Scotia, he currently lives in Toronto.

A howl into the void, a ghost story, and a bit of a metaphysical hellride

A misanthropic ghostwriter roams an island off the Kenyan coast. An Arizona teenager awaits the next stage in a secretive covenant. A renowned poet retraces her past amid a baffling netherworld. An international arms dealer’s son drifts through time, atoning for the death of the man he loved.

For readers who take their contemporary fiction with a tinge of the otherworldly, Bleeding Light is about mystical experiences, the symbolic fabric connecting us all, and desperate people seeking affirmation—through religious, cosmic, chemical and other means—of a world beyond their own. It’s a grimly funny and often trippy take on transcendence in a hypercommodified age.