As Canada - and the world - stares into a future made unsustainable by the climate crisis, the biggest question is simply: How? How can we solve a problem that feels overwhelmingly unsolvable, all while ensuring people have jobs and that existing inequalities are addressed?

Enter Seth Klein, one of Canada's top policy analysts, whose new book A Good War: Mobilizing Canada for the Climate Emergency (ECW Press) provides an actual, practical blueprint to answer that question of "how?". His is an approach so practical and concrete that activist Naomi Klein called the book "the roadmap out of climate crisis that Canadians have been waiting for."

We're proud to present an except from A Good War here today, courtesy of ECW Press. If you've been wondering and worrying how we can come together to tackle the climate emergency, this is for you.

Excerpt from A Good War: Mobilizing Canada for the Climate Emergency by Seth Klein 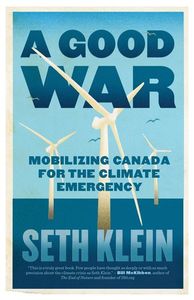 I am convinced that to confront the climate emergency a wartime approach is needed, and moreover, that our wartime experience should be embraced as an instructive story. Climate breakdown requires a new mindset — to mobilize all of society, galvanize our politics and fundamentally remake our economy.

Despite decades of calls to action, our greenhouse gas (GHG) emissions are not on a path to stave off a horrific future for our children and future generations. The accompanying chart tracks Canada’s GHG emissions going back to the year 2000. What is evident is that, in the face of the defining challenge of our time, our politics are not rising to the task at hand. 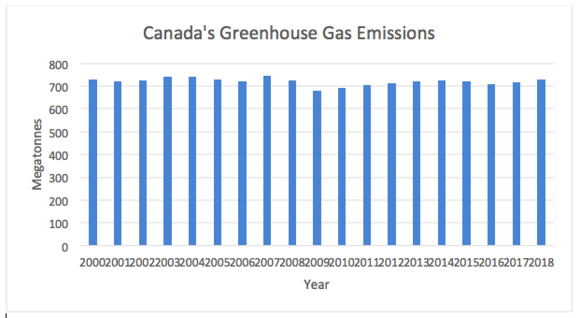 Let this deeply disturbing chart sink in. And then let us all agree — political leaders, civil servants, environmental organizations, academics and policy wonks, labour leaders, socially responsible business leaders — that what we have been doing is simply not working. We have run out the clock with distracting debates about incremental changes. But where it matters most — actual GHG emissions — we have accomplished precious little. With the exception of a slight downturn in emissions during the 2008–2009 recession, we have made almost no progress, and frequently have slipped backwards.

Yet we have been at this for years. Canada initially committed to take action on climate change in 1992, when we signed the United Nations Framework Convention on Climate Change (UNFCCC) at the Rio Earth Summit. But our emissions continued to rise substantially right through the 1990s. We recommitted with the Kyoto Protocol (1997, ratified by Canada in 2002) and again at the international climate meetings in Copenhagen (2009) and Paris (2015). The chart, however, speaks for itself. We have failed to meaningfully bend the curve on carbon pollution.

At least things have more or less flatlined, you might say; our emissions are no longer rising. But as the great climate change warrior and founder of 350.org Bill McKibben has said, “Winning slowly on climate change is just another way of losing.” Politics might be all about compromise and the art of the possible. But there is no bargaining with the laws of nature, and nature is now telling us something fierce.

And so a new approach is needed. We need a “wartime” mindset and political/policy agenda to tackle the climate emergency — it’s time for a good war.

This project began as an exploration of how we can align our politics and economy in Canada with what the science says we must urgently do to address the climate emergency. And it is that. I had always planned to include a chapter on lessons from the Second World War. But as I delved into that work, I began to see more and more parallels between our wartime experience and the current crisis, and ultimately decided to structure this entire book around lessons from Canada’s Second World War experience. Not because I get all weirdly animated about war. Nor is it because I think we need a metaphor about sacrifice, and certainly not because I think there is anything glorious or appealing about war. Rather, it is because I see in the history of our wartime experience a helpful — and indeed hopeful — reminder that we have done this before. We have mobilized in common cause across society to confront an existential threat. And in doing so, we have retooled our entire economy in the space of a few short years.

I’m far from the first person to say we need a wartime-scale mobilization to confront climate change. But usually this comparison is made as a passing reference. No one to date has, in the Canadian context, delved into the similarities and lessons in detail.

I invite you here to explore what wartime-scale mobilization could actually mean. In the chapters that follow, we will jump back and forth in time between stories of what Canada did during the war and what we now face. And in these comparisons, we will answer questions such as:

This book is an invitation to our political leaders, to reflect on the leaders who saw us through the Second World War and to consider who they want to be, and how they wish to be remembered, as we undertake this defining task of our lives. My hope is that this book might embolden them to be more politically daring than we have seen to date, because that is what this moment demands.

And much like the trials that tested the character of past generations, this book is also an invitation to all of us to reflect on who we want to be as we together confront this crisis.

Confronting the climate emergency is not precisely the same as war and the battle against fascism. There are differences, of course. But I am arguing that our wartime experience provides very instructive lessons about how to confront an existential threat.

As you read this book, my hope is that you will marvel, as I have while researching and writing it, at the scale and scope and speed of what Canada did during the war years. And that you will find inspiration that we are capable of once again accomplishing something amazing — that we can do ourselves proud and, like then, that we can come out the other end of this transformation not only with a safer environment, but with a better and more just society than the one we are leaving behind.

This is not a book about climate science. It takes the urgent science and the impacts of climate breakdown as a given. Rather, it is a book about politics, history and policy innovation. It takes as inspiration Canada’s Second World War experience and also finds encouragement from a few other countries that, unlike Canada, are starting to treat this crisis as the emergency that it is. I also draw heavily upon interviews conducted with politicians, academics, activists, Indigenous leaders, labour leaders, and others.

I spend some time in the early chapters surveying the principal barriers to transformative climate action. But by and large, I choose to focus on what can be done to overcome these barriers. I believe you will find this an unusually hopeful book, given the subject matter.

Effectively tackling the climate crisis is not a technical or policy problem — we know what is needed to transition to a zero-carbon society, and the technology required is largely ready to go. Rather, the challenge we face is a political one. Climate solutions persistently encounter a political wall; the prevailing assumption within the leadership of our dominant political parties appears to be that if our political leaders were to articulate (let alone undertake) what the climate science tells us is necessary, it would be political suicide. And so they don’t.

This book explores whether we can successfully align our politics with climate science, and the conditions under which it may be possible to practice such a bold politics that is well-received by the public. It outlines what a truly meaningful and hopeful climate program can look like in Canada and makes the case for why our political leaders should embrace this generational mission.

Our sense of what is possible is contained by what we know. Hopefully this exploration of what we did the last time we faced an existential threat can serve to blow open our sense of political and transformative possibility.

Like many of you, as I read the latest scientific warnings, I’m afraid. In particular, I feel deep anxiety for my children, and about the state of the world we are leaving to those who will live throughout most of this century and beyond. All of us who take seriously these scientific realities wrestle with despair. The truth is that we don’t know if we will win this fight — if we will rise to this challenge in time. But it is worth appreciating that those who rallied in the face of fascism 80 years ago likewise didn’t know if they would win. We often forget that there was a good chunk of the war’s early years during which the outcome was far from certain. Yet that generation rallied regardless, and in the process surprised themselves by what they were capable of achieving. That’s the spirit we need today.

This excerpt is taken from A Good War: Mobilizing Canada for the Climate Emergency by Seth Klein, copyright © 2020 by Seth Klein. Published by ECW Press.

Seth Klein was the founding British Columbia director of the Canadian Centre for Policy Alternatives for over two decades and has been immersed in climate change and inequality issues for his working life. He is currently an adjunct professor in urban studies at Simon Fraser University and remains a research associate with the CCPA. He lives in Vancouver, B.C.

A Good War: Mobilizing Canada for the Climate Emergency

“This is the roadmap out of climate crisis that Canadians have been waiting for.” — Naomi Klein

Canada needs to reduce its greenhouse gas emissions by 50% to prevent a catastrophic 1.5 degree increase in the earth’s average temperature — assumed by many scientists to be a critical “danger line” for the planet and human life as we know it.

It’s 2020, and Canada is not on track to meet our targets. To do so, we’ll need radical systemic change to how we live and work—and fast. How can we ever achieve this?

Top policy analyst and author Seth Klein reveals we can do it now because we’ve done it before. During the Second World War, Canadian citizens and government remade the economy by retooling factories, transforming their workforce, and making the war effort a common cause for all Canadians to contribute to.

Klein demonstrates how wartime thinking and community efforts can be repurposed today for Canada’s own Green New Deal. He shares how we can create jobs and reduce inequality while tackling our climate obligations for a climate neutral—or even climate zero—future. From enlisting broad public support for new economic models, to job creation through investment in green infrastructure, Klein shows us a bold, practical policy plan for Canada’s sustainable future. More than this: A Good War offers a remarkably hopeful message for how we can meet the defining challenge of our lives.

COVID-19 has brought a previously unthinkable pace of change to the world—one which demonstrates our ability to adapt rapidly when we’re at risk. Many recent changes are what Klein proposes in these very pages. The world can, actually, turn on a dime if necessary. This is the blueprint for how to do it.