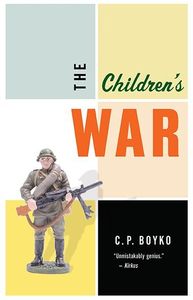 Power can be a strange, amorphous thing, tilting the dynamics between people in unexpected ways. Acclaimed short fiction author C. P. Boyko mines those strange dynamics in his arresting new collection, The Children's War (Biblioasis). From a dentist hypnotizing a patient to women soldiers meeting on the battle field, the book is packed with tense, complex moments and characters. Boyko uses multiple styles and forms, always bringing his razor-sharp insight and satirical edge to the narratives.

We're very excited to present an exclusive excerpt from "Andrew and Hillary", a story in The Children's War, Boyko's fourth collection. In it, an ambulance driver finds himself in a sticky spot and makes a decision that will impact his future. You can read the full story in the collection, available in stores and online, including direct from Biblioasis.

From The Children’s War by C. P. Boyko:

After returning from the island with a bullet in his thigh, Andrew worked for two years as an ambulance driver on the mainland—by far the longest he had ever stuck at one job. Though not nearly so thrilling or glorious as the driving he had done in the war, the work was fun when he was busy, and when he was not, he relished the inactivity: he loved the idea of being paid to sit around the staff room and play poker with the EMTs, watch television, read a book, or sleep. Some days he was even paid to be on call—paid simply to be ready to work!—and though he had to stay sober and close to a phone, the constraint gave him a feeling of responsibility and importance. His family and friends were impressed, too. His only complaints were directed at the bureaucracy of the large medical organization of which he was a part. He had to attend meetings every week; his mailbox was always overflowing with inessential memos; he was constantly being required to fill out forms. He bristled at this treatment, and rebelled in small ways: by not paying for the coffee he drank in the staff room, by not ironing his uniform, by drinking a little when on call, and by going on shift a few minutes late and going off shift a few minutes early.

The week before Andrew’s two-year review was scheduled, his supervisor invited him into his office for a chat. Patrick was jovial and chummy with his staff; he never gave them orders, but asked favours; he cadged their cigarettes and bought them donuts. Andrew disliked him, seeing his easygoing bonhomie as a ruse by which he elicited obedience. How little he actually cared for his staff was epitomized, Andrew felt, by his habit each morning of taking the fresh newspaper into the bathroom for half an hour, and returning it to the staff room with its pages rumpled, disordered, and faintly polluted.

To show Andrew that there was nothing to fear, he left the door to his office open and straddled his chair informally. After several minutes of small talk, in which he demonstrated a knowledge of Andrew’s hometown, favourite beer, and penchant for movie-going, he asked if Andrew was happy in his job.

Patrick peered at him shrewdly. “I sure hope you’re not sweating about this little review coming up.” Andrew made the verbal equivalent of a shrug. Patrick disparaged the seriousness of the review process for a while, then grew pensive. “Of course, the best strategy is always to be prepared. You don’t want to go in there and get blindsided.” Andrew agreed; and after a few more minutes of reassurances and truisms, Patrick admitted that the review board would probably broach the subject of speeding.

Andrew bridled. Some months earlier, Patrick had (in an even more roundabout, noncommittal, and apologetic way) reprimanded him for not using his turn signals to their full advantage. There had also been a memo reminding drivers to obey all posted speed limits—a memo that he now felt certain had been directed at him especially. (It had been.) He realized that he was the target of a prolonged campaign of intimidation and harassment. He started coughing—his asthma being often triggered by indignation.

Patrick, who was terrified of the union, back-pedalled furiously. To show Andrew just how far he was from being fired, he outlined all the steps that would have to be taken before Andrew, or anyone, could be dismissed from his job: an official warning, in the presence of a union steward; an official correction, subject to dispute and appeal; and, finally, three official demerits, with not less than three months’ probation between them, giving the employee time to mend his or her ways.

Andrew did not receive this information in the spirit in which it was offered; rather, he took it as a threat, expressed in Patrick’s mealy-mouthed fashion. Patrick was the arresting officer outlining to the malefactor the months in court that would lead nevertheless inevitably to his conviction and incarceration. Either Andrew must submit, or all the weight of the system would descend upon him and force him to submit. The choice was the same, whether he made it now or three demerits from now: he could toe the line, or he would be fired.

“Of course, I’m not giving you shit here or anything,” said Patrick. “I’m just giving you a heads-up. If it was up to me, I’d say speed all you want. I mean, if you’ve got your lights and your siren on and your way is clear, I say absolutely, drive as fast as conditions and safety allow. But unfortunately, it’s not up to you or me, is it?”

Andrew emerged from this meeting in a mood of anguished despondency, for he knew that he must quit his job. Only by quitting could he expose the enormity of this injustice. But he was not ready to quit. Now that he was faced with leaving it, his job acquired a noble, heroic lustre. But how could he go on under these conditions? All his life, all he had ever wanted was to be an ambulance driver. But an ambulance driver who was not permitted to drive fast? An ambulance driver prohibited from saving lives? It was too absurd; it was an outrage.

That night, over many beers in several bars, as he wove together the threads of his resolution, hardening his heart with anger and disgust, he arrived at the conclusion that he was not, after all, making a great sacrifice, or playing the role of martyr. He was not relinquishing anything precious, because what he had once cherished had already been lost. It was his time on the island, he decided, that had been the real adventure, his true life’s calling. There he had been brave, and dogged, and clever, and necessary. These past two years on the mainland had been nothing but the dazed sloughing of a dream. It was time to wake up.

Click here for more information on The Children's War by C. P. Boyko

C. P. Boyko lives and writes in Vancouver, BC.

In his fourth collection, C. P. Boyko turns his keen eye to the question of power—in schools and on campuses, in doctor’s offices and boardrooms, in triage tents and on the battle field. A high-school math teacher tries too hard to be liked; childhood friends grow up and go to war for very different reasons; for purposes not entirely medical, a dentist hypnotizes a patient; management and workers struggle for control of a faltering factory; infantries comprised exclusively of women meet in battle; and undergraduates occupy a university president’s office, rallying beneath the flag of moral outrage.

Moving effortlessly through a range of styles, from contemporary realist fiction and episodic adventures to three-act plays and polyvocal narratives, Boyko’s chameleon talents reveal the thread that binds his disparate characters and plots: the hunger to hold power and all the ways we are consumed by it. Clear-eyed but not cynical, satirical without being sarcastic, The Children’s War is as entertaining as it is insightful.