As a small child, Sumaiya Matin had heard about the Shaytan Bride. A woman with something wrong with her. Maybe she was crazy, or defiant. Or maybe she was possessed, trapped or seduced by an evil spirit who whispered misleading things into her ear. The story left Sumaiya disturbed, even as the memory receded into the distance. But it also left her determined to make up her own mind about who she was, about her faith, and about her fate - she wouldn't let anyone, jinni or otherwise, dictate what she ought to do. And that determination came in handy years later when, during a trip home to Bangladesh, her family tried to force her to marry against her will.

Matin tells her astonishing story of courage, hope, and resistance in The Shaytan Bride: A Bangladeshi Canadian Memoir of Desire and Faith (Rare Machines/Dundurn Press). It is a deep and thoughtful tale that is simultaneously tense and powerful, as Matin shares her experience as a strong, young Muslim woman finding her own way.

We're proud to present an excerpt from the book here today, courtesy of Dundurn Press, where we see Sumaiya react to her family's efforts to rid her of her supposed jinni, with blessed water, stern advice, and even an exorcist's help.

Excerpt from The Shaytan Bride by Sumaiya Matin: 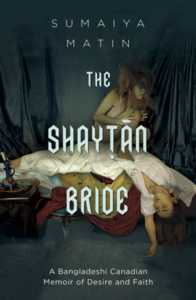 I didn’t see the exorcist, but I heard he’d dropped by and brought with him a ta’wiz, a silver locket containing a small scroll with verses of Ayatul Kursi to ward off evil. The locket with the surah was attached to a black thread. The ta’wiz was supposed to be wrapped around my arm or worn around my neck.

It must have been early in the morning or late in the night when he left it for me. I must have been sleeping. I wondered if he had entered the bedroom and watched as I lay there on one of the two beds, the one by the large window next to the veranda. That window was usually open at all hours, the thin linen curtains blowing occasionally when the breeze could eke its way through the humid Dhaka streets.

I must have been on my back, legs spread apart, each breast sliding away from the centre of my chest, open and unguarded. Or maybe I had been on my right side, in the fetal position with my knees up to my chest, head over my bent arm, as if I was back in the womb again. It must have been then when he hovered over me, holding his palms open to the sky, reciting prayers, then gently placing his clammy hand on my forehead. Whiff of sandalwood incense. Performing ruqyah, reciting the words of the Quran to confront the jinns with bad dispositions and the jinns sent by everyday sorcerers to afflict humans.

I heard the lilting Arabic verses that were so distinct and familiar to me. A tonic of solace, trust, and mystery soaking into my ears, soaking into the saliva filling my gaping mouth as I half slept. These words were a remedy, despite any incoherence from the flawed delivery of the reciter. My heart was either conditioned or naturally inclined to find the breaths between them, a space to rest, like the pulpy pillow I laid my head on.

Or maybe I had heard nothing but the rattle of the rotating blades of the fan overhead.

The haze and my disorientation were much less bothersome to me than the sharp flicker of light between my eyelids. I twitched awake, only to hear fading footsteps.

Had it all been a dream? I wondered.

What I knew was that in the morning, when I got off the stiff bed, drowsy and suffering some sort of memory distortion, I found Sweety Khala standing there in her floral salwar kameez, wavy black hair in a bun. She turned her body to the mattress and, suddenly and hastily, pulled it up with all the strength she had, revealing the black string attached to a silver locket. She carefully moved one of her hands toward the amulet and snatched it from where it lay, releasing her other hand from the mattress. She let the mattress tumble like a falling skyscraper while keeping her eyes fixed on me, almost unblinking. She opened her right palm slowly to reveal the ta’wiz she was now holding.

“Put this around your arm,” she said. “It will protect you from what you’ve been stricken with.”

“No,” I said in a sharp tone. I turned away from her. We stood there under the rotating fan blades for a few more minutes.

“From what do I need protection? I’m fine,” I said.

“You claim you’re in love,” she replied, widening her eyes, and with all her weight on one hip, which indicated she had diagnosed me with some certainty, but that there was more she was probably trying to figure out. “It’s not wise, to be so eccentric. It’s not normal, however you’re behaving.”

I pushed her hand away with my own — what felt to me like moving boulders but was really a slight tap. I hadn’t eaten for days. I was really weak. She held onto the ta’wiz tighter, as if her life depended on it.

“All the men we’ve suggested, you’ve rejected. You just lay there, and don’t consider anything we say. Sometimes you’re a monster, yelling loudly and pushing us away.”

She explained that these were all the symptoms of sihr, someone else’s ill intentions sent my way, or perhaps the interest of a jinni who wanted to make a home of my body, or who had fallen in love with me.

As she explained, I thought, I believe in jinns, too, made of smokeless fire, living alongside humans in an unseen world. I did believe that certain powers could be sent to influence a person to behave in ways that were not aligned with their true, deepest nature, that would make their battle within themselves to manage their misguided yearnings even harder. However, the agony I felt came not from jinns, but from one source and one source alone: being coerced to do something I did not want to do.

As my thoughts unravelled, intertwined, and spun like thread, a young girl stumbled in. She was a maid, and her name was Bilkis. She was wearing a pair of brown capris with holes in them and a pink shirt with a rainbow printed on it. She had dark-brown tumbleweed hair. Her front tooth was crooked, and her skin seemed brittle. Bilkis kept her eyes on me as she shuffled in my direction holding a glass of water, which she presented to me without comment.

I peered over the rim of the glass. I was parched and could already feel the slimy water in my mouth. Amid the miasma of secrets, fading sounds albeit moving mouths, and the furtive glances, I wondered if someone had put something in this water.

“At least drink this,” Sweety Khala said, pointing to the water. “It’s Zam Zam water from Mecca, brought back from Hajj.”

The Zam Zam water came from a well in Mecca, east of the Kaaba, the holy building toward which Muslims around the world pray five times a day. Prophet Ibrahim’s wife Hajar had found it in the hot, dry desert, where no one thought water existed, and used it to feed their son Ismail.

It was holy water that I, too, revered, yet when I extended my hand toward the glass, I retracted. Such were the times, where my trust was always wavering, where I couldn’t believe what people were telling me — not completely.

What did I think and how did I feel about being told that I was possibly possessed by a jinni? As Sweety Khala had pointed out, it was true that I presented with quite a few symptoms of a person possessed: aches in my heart and my head that were constant and far-reaching; my occasional dreams of falling off buildings, which lingered like an unattended urge; trailing whispers, sometimes in the distance and sometimes close.

It was, at first, all too ridiculous. A diagnosis based on an observation, so sudden, and imposed by everyone. But as they increasingly exposed me to their hopes and the concerns of their own agenda, I realized that perhaps all these years I had not known them as well as I thought I did, and there was a larger world about which I had not been very aware.

The time was strange, but all I knew and wanted was for it all to be over.

When Bilkis handed the glass of water to me, I thought for a moment, What would happen if I knocked the glass out of her hand? Perhaps it would have looked like I was exactly what they thought I was: crazy. During this time, I had become particularly aware of and attuned to how I was being perceived and the multiple ways my actions and words could be used to suggest a truth about me that I wouldn’t be able to erase. What was this truth? It was fleeting and defined by the perception of groups of people. So, given the intangibility and conditionality, I decided then, despite my every urge, to grab the glass and take a sip.

I thought to myself, Allah knows my heart. Whatever is right, whatever is real, will ultimately surface.

“Fine, put the ta’wiz on me,” I said in a kind of rebellion, or maybe acceptance. For, somewhere within me, I knew it didn’t matter, anyway. No talisman or amulet could shape what would happen; only Allah’s will.

At the time I was perceived as going astray from Allah, but it was then that my faith had deepened the most.

This is not a rescue story.

Sumaiya Matin is a writer and a strategic advisor for the Ontario government, working on anti-racism initiatives. She lives in Toronto.

The Shaytan Bride: A Bangladeshi Canadian Memoir of Desire and Faith

The true story of how one Muslim woman shaped her own fate and escaped her forced wedding.
Sumaiya Matin was never sure if the story of the Shaytan Bride was truth or myth. When she moved at age six from Dhaka, Bangladesh, to Thunder Bay, Ontario, recollections of this devilish bride followed her. At first, the Shaytan Bride seemed to be the monster of fairy tales, a woman possessed or seduced by a jinni. But everything changes during a family trip to Bangladesh, and in the weeks leading to Sumaiya’s own forced wedding, she discovers that the story — and the bride herself — are much closer than they seem.
The Shaytan Bride is the true coming-of-age story of a girl navigating desire and faith. Through her journey into adulthood, she battles herself and her circumstances to differentiate between destiny and free will. Sumaiya Matin’s life in love and violence is a testament to one woman’s strength as she faces the complicated fallout of her decisions.