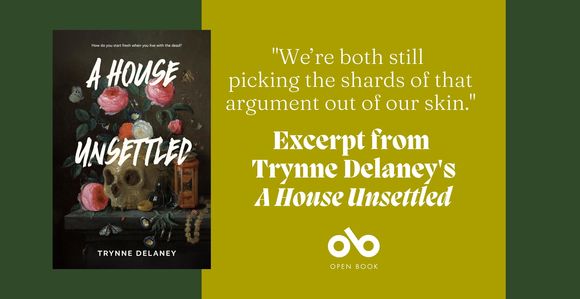 Today we continue our November spotlight on excerpts, offering a chance for readers to sample sections of exciting new Canadian books, with Trynne Delaney's A House Unsettled (Annick Press), a spectacular young adult novel from the Montreal-based writer, which is part character study and part haunted house story.

When the novel opens, city girl Asha is making a fresh start with her mother, moving to her great aunt's country house. But like the strange old house itself, when you look closer, everything is in much worse shape than a first glance reveals: Asha's dad is in jail and her stepdad is a pushy nightmare, and though Asha loves her mother, their fights are spiralling out of control.

Then come the strange sounds, the unexplained chills, and even the feeling—just the feeling, surely—of hands closing around her neck in the night.

A House Unsettled is a fresh and urgent haunted house story not only because of Delaney's skill at building dread and suspense but because the supernatural comes second to the psychological: Asha and her family are complex, fully realized people, as haunted internally as anything happening externally, and they aren't all the usual white, straight horror novel victims. The novel grapples with themes of oppression and injustice, including the difficulty of celebrating Black, queer love in a prejudiced and bigoted society, as well as family, history, and how the past entwines with the present. Today we're sharing an excerpt, courtesy of Annick Press, in which we see Asha first arrive at the house and get a hint of what's to come.

Excerpt from A House Unsettled by Trynne Delaney: 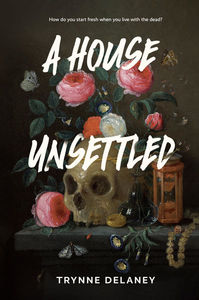 Traci kills the ignition with a swift hand. Her aging station wagon shudders to a halt and the headlights flick off. It’s evening. The old-growth trees that surround Great Aunt Aggie’s property make just enough shade to give our surroundings the dark blue illusion of night.

Home. I wouldn’t have used such a strong word for this place. I understand why we had to move to Great Aunt Aggie’s old house, but that doesn’t make me any less homesick for the city, its foggy mornings, and our vermin-free house. This place, no matter how many times I visited growing up, remains unfamiliar to me. But Traci needed to come back; she and Aggie were each other’s only close living relatives, since she lived with Aggie as a teenager and all Aggie’s siblings moved out west before Traci was even born. Traci says their moving away was a betrayal of the highest order for Aggie. When the cousins came out east to visit, she’d tolerate their presence as long as they made no mention of her brothers. We’re the only branch of the family left on the east coast. If Traci hadn’t stepped up to take care of the house, it would’ve been demolished. Without Dad around, I had to come with her.

Still, as the sun set over the harbor last night, I thought maybe Traci would decide this was all part of her midlife crisis, same as her losing her job, and that she didn’t actually want to move out to the middle of nowhere to an enormous and desperately neglected house where she spent her unhappiest teenage years. Up until last night, I refused to pack in hopes that would convince her to stay in the city. When that didn’t work, I got mean. We’re both still picking the shards of that argument out of our skin.

Each of us is hanging on to the promise of a fresh start—the only thing we agree on is wanting to get as far out of people’s sightlines as possible after what happened to Dad.

As we step out of the car, the house’s hulking body blocks out the setting sun, coating us in a damp cool. Traci smiles at me wide. “Isn’t it just gorgeous?” she says with a sigh, her eyes glinting against the little remaining light. I squint at Aggie’s house and try to imagine what it’ll look like when all the repairs and cleaning are done. It’s hard. My eyes move over the gaping rottenness of it all, unable to focus on anything specific.

Traci pops the trunk, and we pull our luggage from the car. One thing I share with my mother is a talent for packing lightly. Each of us only brought one suitcase. Jeff will bring the rest of the things in his truck next weekend. He said he couldn’t make the three-hour commute with us on a weekday because he needs to be sharp at work if he wants to make CEO when his boss retires. It’s fine with me that he couldn’t make it. I’m not exactly itching for the three of us to live together—it didn’t go so well last time we tried.

“You got everything?” Traci reaches up to pull down the trunk hatch. She hesitates. “You want to bring in your skateboard?” My board leans against the dented side of the trunk, the scratched purple UFO on the back reminds me of riding through the night back in our old neighborhood with Nia. I checked my phone the whole way here but there were no messages from her to distract me from the distance of the highway between us. She’s probably heading to the skate park to practice her rock to fakie with some friends before her flight to Freetown takes off in a few days. Homesickness holds me so tight around the throat I can’t breathe for a minute.

“You coming?” Traci is already navigating the path to the house. The structure blurs at the edges, crooked and imprecise. Maybe I’m carsick. “Careful not to get any ticks!”

I shudder at the overgrown grass leading to the door, but grit my teeth and follow. The path often forgets its direction in the alternating weeds and dry patches that eventually take me to the entrance. As much as I try to avoid it, my calves bear the tickling of overgrowth. I ignore the urge to swat away potential bloodsuckers until I’m at the door. I can already feel lumps beginning to swell and simmer beneath my skin.

Traci points to the third step. It’s sagging on the left side. “Watch you don’t step there. It’s rotten.” I’m careful to avoid it as I follow her onto the porch.

Even here, in the questionable security of the porch’s rotten overhang, the details of the house remain blurred against my memory of it. Me and my cousins played out here in the winter, one Christmas when the adults decided to have a reunion. We raced in circles around the house, climbing the railings of the wraparound veranda. Back then, trips out here were an adventure. We were so close to nature and spent summer weekends swimming in the clear waters of a nearby ravine, jumping onto springy beds of moss... that vague memory version of this house is as distant as my cousins, who haven’t come to visit in six years.

I wonder what it’s like for Traci to be back. Maybe she only sees what it could become when it’s restored. I can’t tell from her face, which is upturned, searching for the hidden key in the rafters.

“Aha!” she says with glee. She tries to reach for it, but she’s too short. “Honey, I need your height.”

On tiptoes, I reach up into the cobwebbed rafters. The key is tired brass hardware store stock mangled by years of over twisting in sticky locks. I’m startled by its warmth in my hand, like someone else was recently holding it. I drop it and it skitters to a stop just before it slips through the wide cracks of the soft porch wood. Holding it gingerly between my fingers, I drop it into Traci’s palm.

“Thanks Asha.” Traci kisses my cheek. I almost pull away out of habit, but I want to love her just as bad, and my arms find their way around her. She holds on too long. It’s as if she’s sucking the love out of me. When I was younger, I used to curl up beside her in bed when I had nightmares and melt into the safety of her. Now something about our skin touching is artificial.

Traci unlocks the door and steps inside. The smell of air that’s been still too long curls out of the house like smoke. Its undertones are familiar and alive: aging wood, silver polish, yeast, and pine... but the result is as strange as looking at someone you knew well in an open casket; all that compressed dust pretending life.

When I glance back at the car, all that falls outside the house’s shadow is cut with the lowering sunlight, sharp as shards of glass.

Trynne Delaney is a writer currently based in Tiohtià:ke (Montréal). They were born on the west coast and raised on the east coast in the place colonially known as Canada. the half-drowned, a poetic novella, was published with Metatron Press in spring 2022. Trynne has never seen a ghost, but they’ve been one.

Ghosts aren’t the only thing that can haunt a house.

With her dad’s incarceration, escalating fights with her mom, and an overbearing stepdad she’s not sure she can trust, Asha is desperate for the fresh start promised by a move to the country. Her great aunt Aggie’s crumbling, pest-ridden house isn’t exactly what she had in mind, but the immediate connection she makes with her new neighbor Cole seems like a good sign. Soon, though, Asha’s optimism is shadowed by strange and disturbing occurrences within the old house’s walls: footsteps stalking the halls; a persistent chill; cold hands around her neck in the middle of the night . . .

Fearing for her loved ones’ safety—and her own—Asha seeks out the source of these terrifying incidents and uncovers secrets from the past that connect her and Cole’s families and reach into the present. But as tensions with her mom and stepdad rise and Cole withdraws, Asha is left alone to try and break the cycle of violence that holds them all in its haunting grip.

Trynne Delaney’s debut novel explores the insidious legacies of violence and oppression—and how Black, queer love and resistance can disrupt them.