For younger Canadians, the name Matthew Charles Lamb may not ring a bell. But those who know it will never forget the man who was dubbed Canada's first spree killer after a bizarre and unprovoked shooting spree in Windsor in 1966.

Retired RCMP officer Will Toffan's Watching the Devil Dance: How a Spree Killer Slipped Through the Cracks of the Criminal Justice System (Biblioasis) follows Lamb's crime and its deeply strange aftermath. Found not guilty by "reason of insanity", Lamb's story winds through experimental psychiatric treatments with LSD, a doctor who came to trust him so much he allowed Lamb to babysit his daughter and act as a therapist for other patients, and an early death fighting for a colonialist government force in what was then known as Rhodesia (now Zimbabwe).

Fascinating, measured, and compulsively readable, Watching the Devil Dance is essential true crime reading and a chilling indictment of the failings of the justice system. We're excited to present an exclusive excerpt from the book here for you today, courtesy of Biblioasis.

Excerpt from Watching the Devil Dance by Will Toffan: 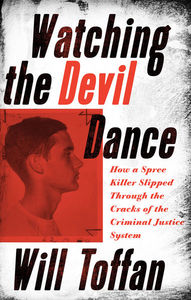 Two days after blasting his way into Canadian criminal history, Matthew Charles Lamb appeared before Windsor’s Magistrates Court with only the judge, court stenographer, a single reporter from the Windsor Star, and arresting officer Detective Sergeant Jim Ure in attendance. Court proceedings were surreptitiously moved up an hour earlier than scheduled to avoid a crowd of curious spectators and media hounds ready to cover the sensational crime for their newspapers or to pad television ratings. Everyone was anxious for a glimpse of the young man who, two days earlier, gunned down four innocent strangers in a residential Windsor neighbourhood for no apparent reason.

Lamb sat alone on the long wooden bench in the prisoner’s dock, usually filled with detainees awaiting their turn to shuffle up before the presiding judge to hear their charges read and court dates set. Lamb’s body language and loud audible yawns articulated his indifference toward the court proceedings. Handcuffed and brought before the magistrate, Lamb was charged with the capital murder of Edith Chaykoski—a crime carrying a mandatory death sentence upon conviction. Capital punishment would not be abolished in Canada until 1976, a decade later. The magistrate ordered a standard pretrial psychiatric examination to determine Lamb’s mental state.

Immediately following Lamb’s first court appearance, Dr Walter Yaworsky, a Windsor psychiatrist, interviewed the defendant at the Windsor county jail for one hour. Lamb was not asked to fill out any psychiatric questionnaires or given the standard Rorschach test (the ink-blot cards) in use since 1921 or the Minnesota Multiphasic Personality Inventory (MMPI) used to assess personality traits and psychopathology. These were the most reliable diagnostic tools for determining underlying emotional trauma and psychotic thinking patterns available in the 1960s.

Lamb dominated his interview. Loudly proclaiming his innocence, Lamb told Yaworsky he had no memory of any shooting rampage, yet when informed of the death of Chaykoski, Lamb giggled and said, “Poor broad”—that same sadistic giggle his friend Roger Hammond had always found so disturbing. Purposely avoiding Yaworsky’s specific questions about the night of the shootings, Lamb made a transparent attempt to impress the psychiatrist by proclaiming that “he would kill himself if he found out he had indeed committed the crime.” He also had made claims that he had intended to commit suicide, by shooting himself, on the night of June 25. Of course, he then changed his mind and ventured outside—armed to the teeth—to gun down strangers.

Lamb frequently changed the subject while strutting around the county jail’s holding room, complaining to Yaworsky how “he just wanted a normal life like other kids his age,” then quickly changing tack by bragging of the money he’d saved for a new car, while cautioning the doctor that he had “the kinds of friends you don’t mess with.” Lamb displayed all the classic traits of the violent psychopath: the self-centred sense of entitlement, grandiosity, and attempts to establish control over the interview process. Lamb’s one-hour interview with Yaworsky appeared to be, on the surface, a long rambling and incoherent rant, yet it contained a well-concealed logic designed to convince Yaworsky of Lamb’s mental instability.

Yaworsky’s diagnosis of Lamb, based entirely on this one-hour interview, described a young man suffering from a “hypomanic mood,” evident by Lamb’s agitation and frequent changing of the subject, and reported his “total amnesia” regarding the shootings. It was Yaworsky’s opinion that Lamb suffered from “a condition causing a marked defect in his ability to feel or appreciate emotion-based behaviour with a subsequent inability to feel remorse, guilt, or shame.” In other words, Lamb displayed the basic characteristics of the psychopathic personality. Yaworsky, of course, did not have the “Psychopathy Checklist” at his disposal, or even a sophisticated understanding of what a psychopath was, particularly in the criminal justice setting. Instead, the doctor made a diagnostic leap, declaring Lamb to be “insane . . . having suffered a temporary ‘psychotic break’ from reality causing ‘complete amnesia’ at the time of the killing.” He continued, saying that the break made Lamb “incapable of appreciating the consequences of his actions” or able to participate in his own defence. Yaworsky offered no quantifiable evidence to support his assertion of insanity, other than citing (and believing) Lamb’s claim of amnesia and his bizarre behaviour throughout the interview. The diagnosis was apparently based entirely on this one-hour jailhouse conversation, without the benefit of psychological testing to substantiate his conclusions.

Law enforcement officers have long been familiar with the psychopath’s predictable antics and proven ability to con medical professionals. One of the psychopath’s favourite interview games is “duping delight,” in which he lies just to see if he can get away with it. The psychopath manipulates his listener by adopting a self-confident swagger and making sweeping, inconsistent statements. He uses these tactics to confuse the mental health assessor, making it difficult for the listener to properly follow the psychopath’s self-reporting. The psychiatrist is led to believe that he or she is witnessing acute mental confusion, irrational and inconsistent behaviour associated with a lost sense of reality and a lack of understanding of consequences. Microexpressions, like an ill-timed smirk or slight grin—or even a giggle—are giveaways of duping delight. The psychopath’s objective is fairly simple: to portray himself as incapable of appreciating the nature of the crimes he commits in order to minimize punishment.

Yaworsky’s jailhouse interview with Lamb is a textbook example of duping delight—or what my former RCMP colleagues cynically named the “devil dance.” As uniformed officers in the 1970s, we would sometimes listen in on interviews between violent, psychopathic offenders and local psychologists ordered by the courts to evaluate the offenders’ mental stability. Both frustrating and amusing was observing the look of shock and fascination on the psychologist’s face when confronted with an offender’s unpredictable and outrageous behaviour—as they frantically scribbled observations in their notebooks, recording every nuance of abnormal behaviour listed in the psychiatric bible, then the DSM-1. In the 1960s and 1970s, most professional analysts lacked experience dealing with violent psychopaths and the post-arrest “madman”—an act so familiar to law enforcement. According to his few friends, Lamb learned the essentials of the devil dance at a much earlier age, mastering the manipulative verbal skills and hyper-physical displays of performance art at which the psychopath naturally excels.

This excerpt is taken from Watching the Devil Dance: How a Spree Killer Slipped Through the Cracks of the Criminal Justice System by Will Toffan. Copyright 2020 by Will Toffan. Published by Biblioasis. Reprinted with permission.

A retired history teacher and veteran of the Royal Canadian Mounted Police, William Toffan lives in Windsor, Ontario, with his wife, Laura, and children Lauren, Heidi, Oksana, and Heather. Watching the Devil Dance is his first book.

Watching the Devil Dance: How a Spree Killer Slipped Through the Cracks of the Criminal Justice System

The unbelievable true story of North America’s first known spree killer, written by a veteran of the Royal Canadian Mounted Police.
In June 1966, Matthew Charles Lamb took his uncle’s shotgun and wandered down Ford Blvd in Windsor, Ontario. At the end of the bloody night, two teenagers lay dead, with multiple others injured after an unprovoked shooting spree. In his investigation into Lamb’s story, William Toffan pieces together the troubled childhood and the history of violence that culminated in the young man’s dubious distinction as Canada’s first known spree killer—at which point the story becomes, the author writes “too strange for fiction.” Traveling from the border city streets, to the courtroom, to the Oak Ridge rehabilitation center, and finally the Rhodesian army, Watching the Devil Dance is both a thrilling narrative about an unbelievable true crime and an insightful analysis of the 1960s criminal justice system.