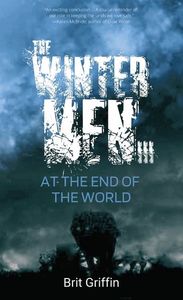 Brit Griffin's The Wintermen series is a timely and chilling look at a world that could easily be our own in a not too distant future - ravaged by climate catastrophe and divided socially.

In the final instalment of her dystopian tale, The Wintermen III: At the End of the World (Latitude 46 Publishing), protagonist Johnny is determined to rebuild after the worst has come. But he's working against an all-too-realistic threat: the charismatic leader of a faction determined to return the world to a capitalist machine that benefits a tiny group as the majority suffer.

A tale of greed, environmental abuse, and hope in the face of all of it, The Wintermen series, with its gritty and satisfying conclusion in At the End of the World, is not only a rollicking ride with compelling world building and characters, but a cautionary tale for our times.

We're excited to share an exclusive excerpt from the novel, courtesy of Latitude 46 Publishing. Get a taste of Griffin's writing here and be sure to check out the whole Wintermen series.

Excerpt from Brit Griffin's The Wintermen III: At the End of the World

Susun and Jeff had taken their time, sheltering in abandoned homes along the way, being cautious, making sure they weren’t followed. In one house they hit the mother-lode, Jeff telling Susun that the folks in the area must know jackshit about scavenging. He was right. Back home, everything for miles and miles around had been picked to the bone. So when they opened the pantry door in the house and saw rows and rows of canned food, it was hard to believe. The homeowners had even left coffee behind, Jeff saying after his first cup that he could hardly take it, it was going to his head right away. “Better get me to a detox,” he’d said. “Getting more of a buzz off this than the weed I used to grow.”

Jeff was now surveying the clearing down below through the binoculars. Passing them to Susun, he said, “Someone’s working up quite a sweat down there. Check it out, right along the back-side of the cabin there, chopping wood.”

Susun took the glasses. The cabin was tidy. Very tidy. A couple of large metal buckets on the porch, hung by the door, then along the side, four neat rows of stacked firewood, another row of chopped kindling, nothing out of place. Another small building set back and behind the cabin, then a lean-to. Then she heard the cracking sound of the wood splitting, remembering being a kid, watching her dad chop and stack wood through the summers, gearing up for winter. Never imagined things could change so much. Not back then when the seasons seemed carved in stone.

She studied the figure. Sweat running down the back of the white undershirt as the axe went up and then down again. Short hair, almost a buzz cut. But blonde. Had to be her.

“Yeah? You’re sure that’s a good idea? Just ride in there?”

Susun didn’t answer. Not too long ago she’d thought she never wanted to see the woman again. She’d brought nothing but a trail of violence to their small community. Twice. But times change, and Susun was hoping to God they had found Mitch Black.

She turned her horse, said, “Yeah, she scares me, too, but I think, maybe deep down, she’s okay. Or maybe wants to be okay.”

“Seriously, you’ve got to stop with the heavy-duty optimism.”

“What are we doing here if we’re not optimistic?” She sat for a minute, staring down at the cabin, tipped her face upwards and said to Jeff, “The sun feels strange.”

“Everything feels strange. Like, surreal. Can you believe it? I’m some cowboy now, some Wyatt Earp guy riding down into a gunfight. I mean, I can hardly believe it, and like, I’m in the story, know what I mean?”

Susun just nodded, looked back to the cabin.

Jeff kept going, “Like it’s pretend. Or a dream, yeah, more like a dream, like I’m going to wake up back at the old Fraser Hotel instead of riding down into some outlaw camp. I’m tripping out on some major Clint Eastwood here, big time.”

Susun thought about that. The Fraser Hotel, with its candlelight and big kitchen and roaring wood stove. Johnny had said that when he’d thought about where to hunker down for the end times, the hotel seemed like a perfect fit. Big, old, and built back in the day to stand its ground against any fire. Didn’t take long for it to fill up with folks, either.

Christ, she missed it. And missed, too, the way things used to be. Before the winter. She and Jeff had been playing ‘what do you miss most’ all the way down to the border, starting with the small things: a cold beer on a summer day, a long hot bath. Jeff said what he was really missing was a long hot bath with Jordan, then said, “Hey, sorry, at least I know Jordan’s at home waiting for me. I know you must be worried about Johnny.” Susun said, Yeah, she was worried, left it at that. She missed lots of things, but she was also a different person than she used to be. She could live without most of the things she missed. She could even live without Johnny. But she sure didn’t want to.

This excerpt is taken from The Winter Men III: At the End of the World by Brit Griffin, copyright © 2020 by Brit Griffin. Published by Latitude 46 Publishing. Reprinted with permission.

Brit Griffin is co-author of We Lived a Life: The Life, Death and Life of a Mining Town (Between the Lines, 1996), a nonfiction historical book which made the 2011 CBC, and Cross-Country Check-up Summer Reading List. Brit was publisher of Highgrader Magazine for 10 years, an independent publication focused on rural and resource-based communities. She received two American Catholic press awards for her writing on family life, and has worked as a free-lancer in print, video, and radio. She lives in the town of Cobalt, Ontario with her husband, and is mother of three daughters.

The Wintermen III: At the End of the World

Not if The Wintermen have their way.

Brit Griffin’s dystopian series The Wintermen wraps up as Johnny Slaught tangles with new Talos strongman Eton Love over who the future belongs to: the people and the land, or the same old capitalist profiteers. With a slim promise of spring on the horizon, megalomaniac Love is gearing up for a cut and run replay of business as usual, and that means grabbing the wealth that lies within the Wintermen’s territory.

But the forests, deep snows, and wolves, have a different idea about the fate of the northern landscape. Caught between these two powerful forces, Slaught and his community have to decide which side they’re on.

Can they salvage a liveable future from the winter-swept remains of the planet, or is human greed just too powerful?