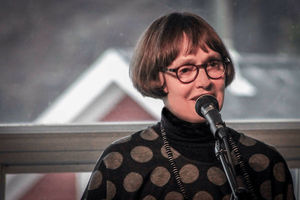 Governor General's Literary Award nominated poet Ruth Roach Pierson's newest collection,  A Skeletal Wand (Palimpsest Press), is a gorgeous book, full of poems that are uneasy and arresting, sketched with a deft restraint that belies a simmering depth of emotion. Touching on mortality and unexplained phenomenon, they are poems of experience and confidence.

We're very excited to present an exclusive excerpt from A Skeletal Wand on Open Book today: two poems filled with strangeness, longing, and deceptively simple lines that will connect powerfully with readers. Enjoy this Friday treat, courtesy of Palimpsest Press, and check out the full collection for more great reading!

Two Poems from A Skeletal Wand by Ruth Roach Pierson

A wind has come and gone, taking apart the mind

There is something out in the dark that wants to correct us.

Is there a lesson in the way this new silence lasts?

Look, the steps move us up through the dark, I can hear them

stepping into the thought that thought cannot enter,

thinking as far as a thought could go.

Remembering you, I remember also compassion.

Somewhere down the hall, someone was playing cello.

I drank from the stream. Tossed in a small stone from the bank,

and each tree, each stone, stood clear in its own full fate.

Not that it’s easy to keep certain moments.

Death rewrites the script, and love does not,

like some pale thing in the dark though it wasn’t dark.

A door blew open in one room, a vase fell in another.

The untranslatable thought must be the most precise.

Gone is the girl in her white slip

There is an age when you are most yourself.

As for me I keep my votive candles burning as the larches burn.

I have come in humility to beg and scratch in the dust.

Though I am weak as a breaking wave

I walk a fresh path toward the river.

Your eyes are the brown gold of pebbles under water

and my own eyes smart in pain and anger at the thought of you.

I believe someday we will show each other our bruises,

remember our porch in an August wind.

I hear tires crunching on a dirt road years out of this city.

Come on, surely by now you remember who you are.

Ruth Roach Pierson has published four poetry collections including Aide-Mémoire, which was a Governor General Literary Award for Poetry finalist in 2008. In 2014 Guernica Editions published an anthology of film poems she edited entitled I Found It at the Movies. Aperture, her chapbook of poems written in response to the photography of Josef Sudek, was also released in 2014. A Skeletal Wand  and her fourth collection Realignment were launched by Palimpsest Press.

In her finest collection of poetry to date, Ruth Roach Pierson marshals her considerable expository powers to explore personhood, paranormal phenomenon, and mortality. A Skeletal Wand reaches out with poems that are both honest and strange, touching on a diverse range of subjects that overlap and disrupt easy interpretation. When Pierson writes "For decades her identity / was derivative / like scent / from a perfume bottle," it is with the belief that character is not set in stone, and that change is inherent to the human condition. Approaching the past and present from many different angles, A Skeletal Wand is a refreshing look at the constants that inform modern life.