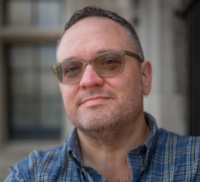 Blaise Pascal once wrote that humans were born with an "infinite abyss" that can only be filled by "God himself", originating a theory that spawned the idea of "a God-shaped hole" in the human psyche.

With signature irreverence, poet and journalist Robert Earl Stewart tweaked this phrase for the title of his raw, arch, ultimately uplifting memoir, The Running-Shaped Hole (Dundurn Press), exploring how running became the thing that finally helped him confront the anxiety that had shaped his life to date.

Before embarking on his memoir project, Stewart took stock of his life and didn't love the data: he was 38, 368 pounds, and, according to his doctor, an unknown number of days away from a serious health crisis. So he set out to run, just a short distance at first, to see whether running can be the thing that makes a difference in his life.

As the months go by, the previous data begins to shift, with miles — including, eventually, a full marathon — stacking up, and the number on the scale going down. The journey is far from smooth or easy, and Stewart's open, emotional, often hilarious account of his time makes for deeply compelling reading. In particular, he addresses that anxiety at the root of his issues, from eating to alcohol, which he must still navigate even as his health improves.

We're excited to welcome Robert to Open Book today to discuss The Running-Shaped Hole, a must-read for memoir fans as well as anyone who has set out to change their life in ways big or small.

He tells us about the notebook that started it all, how creative nonfiction allows "a flexibility with narrative and style" that lets writers share their truth, and why it's important to show our broken parts honestly to readers — and the value in doing so.

An early piece of advice I received from more experienced runners was to keep a running journal — somewhere to track observations about individual runs: distance, pace, routes, weather, diet, discomfort, pain, fears, strategies, successes, etc. Of course, being a writer and someone who understands and deals with things through story, I also included anecdotes about things I saw, people I ran into, obsessive thoughts I was having, what album I picked up at a record store along my running route... So, narratives began to build up around running and what I was learning about myself as the kilometres accumulated. I was at a transitional period in my life not just with weight loss and health, but I was also exiting a 15-year journalism career. There was a lot of change going on and there was the attendant worry and doubt surrounding all of that. Running and the stories taking shape in those handwritten running journals helped transform something that could very easily have been “wrong time” into the right time.

Running some version of the Detroit Free Press Marathon was always supposed to be the climactic event of the story, but along the way there were two foiled attempts to run the race. In 2013 a comedy of errors beyond my control prevented my running, and in 2014 a very intense and unexpected situation took over my entire life for a while, and altered not only my training goals, but the course of the book. The story kept changing as it was being lived. It stopped being a collection of loosely connected essays about running and became a memoir. The real surprise, though — and I go into this in excruciating detail in the book — is how seemingly unconnected aspects of my childhood, my formative years, my grad school years in Montreal, my work in newspapers, all ended up being connected to a specific, kind of unresolved thing, and how running helped me get there and see it for what it was, and grow as a person as a result.

As someone who is very into pens, paper and ink, I love this question. I do a lot of notetaking in longhand and I’m forever cleaning and inking fountain pens depending on whim. I have specific notebooks for the running memoir, different ones for poetry and fiction. I have various black and blue inks for notetaking, but everything is eventually transcribed into prose on my laptop. I print, number and date every draft of everything I write and edit and revise it longhand using Private Reserve Dakota Red ink. I am very into coffee and have a few favourite cafés where I go to read, take notes and edit. But I do very little of the actual writing there. I find, especially with the memoir and fiction projects, that I need to be in my office, which is the unfinished attic of out 110-year-old home, with my laptop and all the previous drafts, in order to get any real writing done. I have good coffee and espresso at home, too, plus I have a sizeable music collection and there’s always something playing unless I’m trapped in one of those impossibly difficult passages that requires utter silence in order to find the pathway through the material or realize to I should just delete it.

My recovery from alcoholism is very much a part of this book. There is a certain spiritual aspect of the book that some people may find surprising. And yes, there is some trepidation about putting those things down on paper and releasing them into the world. But I tried to do it in a way that wasn’t just meaningful for me, but in a way that is hopefully meaningful to others, which helped relieve some of that anxiety. I know there will be many very generous and supportive people, but I suspect there will also be people who can’t accept or see past certain things I disclose in the book. I guess we’re about to find out how I cope with that vulnerability. Running will definitely have something to do with it.

To be perfectly honest I don’t read a lot of memoir or creative nonfiction. I like David Sedaris’s personal essays, the thinly veiled fiction of Ben Lerner. But I’ve probably read more about what creative nonfiction is (or isn’t) than I have read creative nonfiction. I know there are lots of very academic arguments about ethics and what is factual, and I think back to Oprah Winfrey’s very famous attempt to ruin James Frey’s career because he wrote a memoir that contained non-factual storytelling elements. That case alone probably contributed to the rise of creative nonfiction as a literary genre. But at its core I think creative nonfiction, autofiction, memoir, personal essay... they all provide a flexibility with narrative and style that seems to be able to keep pace with the increasing levels of openness and acceptance we are moving towards as a culture and as readers. I’ve written a running memoir that has a partially eaten doughnut on the cover and deals with my years in a rock band, my wandering around the streets of Montreal in a Speedo in the winter, my recovery from alcoholism, my massive weight loss, my mother’s death, my becoming a husband and a father, and a neighbourhood conflagration that somehow seems to encapsulate all those things. I think readers are comforted when they can identify with the broken parts of others, and I think writers are similarly comforted knowing that through their honesty and flaws they are making a connection.

I have been working sporadically on a novel since 2001. It’s about newspapers, bare knuckle prize fighting, the perch fishery, college radio, art heists, obscure indie rock tours, a dentist who is leading a double life, and the private eye who is following him. Some people have suggested to me that it may already be finished. I wish they were right. My agent also wishes they were right.

Robert Earl Stewart’s first book of poetry, Something Burned Along the Southern Border, was shortlisted for the Gerald Lampert Memorial Award, and his poetry has been published in This, Magma, and The Best Canadian Poetry. He spent fifteen years as a newspaper reporter, photographer, and editor. Robert lives in Windsor, Ontario.

A searching, self-deprecating memoir of a man on his way to eating himself to death before discovering the anxiety and fulfillment of distance running.

When Robert Earl Stewart sees his pants lying across the end of his bed, they remind him of a flag draped over a coffin — his coffin. At thirty-eight years old he weighs 368 pounds and is slowly eating himself to death. The only thing that helps him deal with the fear and shame is eating. But one day, following a terrifying doctor’s appointment, he goes for a walk — an act that sets The Running-Shaped Hole in motion. Within a year, he is running long distances, fulfilling his mother's dying wishes, reversing the disastrous course of his eating, losing 140 pounds, and, after several mishaps and jail time, eventually running the Detroit Free Press Half-Marathon.
At turns philosophical and slapstick, this memoir examines the life-altering effects running has on a man who, left to his own devices, struggles to be a husband, a father, a son, and a writer.