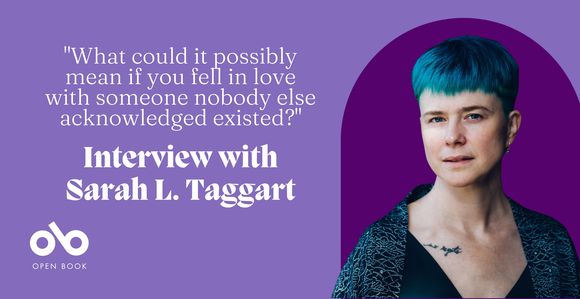 In Sarah L. Taggart's stunning debut novel Pacifique (Coach House Books), Tia wakes up with a broken collarbone after a catastrophic bike accident and calls out for Pacifique, the lover she met just a few days before. They spent five perfect days together, and even in that short time, it's clear their connection is the real thing.

The only problem is that when Tia wakes, Pacifique is nowhere to be found. And soon Tia finds she's unable to even convince anyone Pacifique exists – a disaster that extends even beyond heartbreak when Tia is forcibly incarcerated in a psychiatric hospital because of her so-called delusion about Pacifique.

Soon Tia finds herself doubting her own memories, as doctors and even fellow patients encourage her to forget her lover. Is it possible she really dreamt Pacifique up? And if so, how should one live in a 'real' world that, at times, pales in comparison to delusion?

Equal parts thoughtful, raw, and taut, Pacifique takes it cues from intelligent thrillers of the past like Rebecca to deeply explore the nature of memory, madness, love, and trust – of both ourselves and others.

We're speaking with Sarah today about the novel and how it came to be as part of our Long Story interview for novelists. She tells us why sharing the unvarnished realities of psychiatric incarceration was essential for her writing process, about how the book explores not simply the line between fact and fiction but instead "the spectrum of fact and fiction", and about the humbling, exciting process of seeing one's book "acquire more lives". 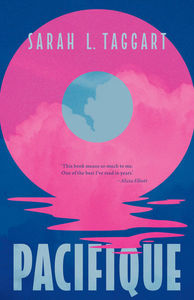 Much of the opening scene of Pacifique is pulled from my experience of a bike accident I had in my early 20s (except for the mysterious and gorgeous Pacifique, unfortunately!). At the end of a day of cycling with a friend, I crashed my bike and hit my (helmeted) head hard, losing about 20 minutes of my memory. The first thing I remember asking the paramedics was where my friend was. My friend answered, “I’m here” from the front seat of the ambulance. Later, he said, “What if you’d asked where I was and I wasn’t there?” Thus began the planning for what would, almost 20 years later, be my first published book. The idea felt so immediately rich with fictional promise: heartbreak, mystery, conflict. From then on, although I wrote and abandoned partial drafts, starting from scratch, drafting outlines, writing nothing for months or even years at a time, I could never shake Pacifique. What could it possibly mean if you fell in love with someone nobody else acknowledged existed? How heartbreaking would that be, and how would you come to terms with such a tragedy? How would the rest of the world treat you?

The first bit of formal writing I did for this was for Bill Gaston’s novel class at the University of Victoria. For the assignment we were to submit a complete novel outline and the opening chapter. I remember being certain I would get an A or A+ from Bill. When I got my assignment back, I had received an A- and it wasn’t Bill who had marked it but writer Devin Krukoff, Bill’s TA. I guess the novel still needed some work!

It was more like the setting chose me. Or that there was ever only one place that this novel could take place. Because some of the novel was inspired by my own experience, experience that took place in Victoria in the early 2000s, I chose that as my setting. I moved the timeline up a few years, into the mid-2000s, but kept Victoria and the hospital very similar to their real-life counterparts. For one, there was so much of Victoria’s climate and weather that I felt were necessary to the story; if I’d moved the place, I would have simply written of a small temperate city with fog and rain and sometimes-snow, a quiet place with a coast on three sides. Instead of inventing a city that was clearly a Victoria copy, I just used Victoria.

As for the mental hospital, I wanted to write as much from my own experience because I wanted to be true to what psychiatric incarceration is like for survivors. While the story at the heart of Pacifique is invented, much of the psychiatric experience is not. I used the same hospital where I had been incarcerated as the setting, keeping much of the ward and building details as true to life as I could remember.

I honestly didn’t know how the novel would end until I wrote the ending. And, in fact, I tried to shortchange my own ending by initially closing the novel too early. I remember sending what I thought were the final chapters to my mentor and him replying, “I look forward to reading the next two chapters.” So, I wrote two more chapters. The ending remains somewhat unresolved and different people read it in different ways, but if I hadn’t added on those two additional chapters, things would have been really messy.

Pacifique is the story of a love triangle in which one character might be the figment of another’s imagination.

Or the tagline that Crystal Sikma at Coach House Books came up with is pretty good too: “Is love real if the beloved isn’t?”

Depends how you read the aforementioned ending!

I dedicated my novel to my late uncle, Doug Murray, and “to all the inmates—past, present, and future—of the Eric Martin Pavilion and places like it. May you find peace.” I included Uncle Doug because he was vital to my surviving psychiatric incarceration and getting out in a relatively timely fashion. I was locked up in Victoria, BC and Doug immediately came over on the ferry from his home in Vancouver. The first thing I remember him asking was, “Would you like me to legally represent you?” I slumped with relief. I was so grateful. His legal advice assisted me in getting a hearing contesting my incarceration, and ultimately almost halved my time in hospital.

The second part of the dedication was directed at other mental patients like me, both those I shared time and space with on the psychiatric ward in Victoria and others. As Pacifique is a madness narrative—what literary and cultural studies scholar Susan Hubert defines as a “firsthand account of the experience of ‘mental illness’ and psychiatric treatment”—I write from my position as a psychiatric survivor. Thus, I am writing from a long history of ex-mental patient activism, and attempting to contribute to that activism. There are so many psychiatric survivors who have not had my good luck and privilege—socioeconomic, racial, having access to free legal help, etc.—who have suffered or will suffer under psychiatric “treatment.” I wanted to acknowledge those people and their lived experience.

No, but I meant to. In the rush of getting the book deal and immediately commencing edits, I completely forgot that I intended to include an epigraph. If I’d remembered I might have used the following from Jerzy Kosinski, a quote I originally encountered in Erica Jong’s Fear of Flying:

“What we remember lacks the hard edge of fact. To help us along we create little fictions, highly subtle and individual scenarios which clarify and shape our experience. The remembered event becomes a fiction, a structure made to accommodate certain feelings. This is obvious to me. If it weren't for these structures, art would be too personal for the artist to create, much less for the audience to grasp. Even film, the most literal of all the arts, is edited.”

That a novel has many lives. Each draft, or part of a draft, is a new life for the book and its characters. Each time I sent out the book to an agent or publisher or editor, each time I sat down again to re-draft or re-consider, I breathed new life into this universe—and as a result, it changed. I also think that there is a lifetime to a manuscript; I was getting close to putting Pacifique in a drawer for good when Amanda Leduc acquired the book for Coach House.

Since publication, too, I’ve learned that the book continues to acquire more lives. Each reader enters into a fresh contract with the novel’s world and its characters. I’m reminded of this every time I hear from someone who has read the book. And when I do, I’m completely amazed, and humbled.

Sarah L. Taggart is a queer writer with lived experience of madness and forced psychiatrization. She has published short fiction in The Malahat Review, The Fiddlehead, and Journey Prize Stories. Her short fiction won the Jack Hodgins Founders’ Award for Fiction and was an honourable mention in The Fiddlehead’s annual fiction contest. She lives in Pito-one, near Te Whanganui-a-Tara, Aotearoa New Zealand with her partner and their dog, Bagel, and is pursuing a PhD at the International Institute of Modern Letters, Te Herenga Waka—Victoria University of Wellington.

Is love real if the beloved isn’t? Girl, Interrupted meets Rebecca in this taut tale of love and madness

When Tia meets Pacifique, it’s a once-in-a-lifetime love. They spend five wild days and nights together, and then Tia wakes up in an ambulance with a collarbone broken in a bike accident — and no trace of Pacifique. Unable to convince anyone that Pacifique exists, Tia winds up in a psychiatric ward, forced to face the possibility that this perfect lover may be a figment of her imagination. While there, Tia meets Andrew, a contemplative man with schizophrenia, who falls in love with Tia. He, too, tells her to forget Pacifique. Who to believe? The medical establishment and her fellow patients? Or her frail human memory? And if Pacifique truly is a figment, is life in the “real world” with Andrew enough?