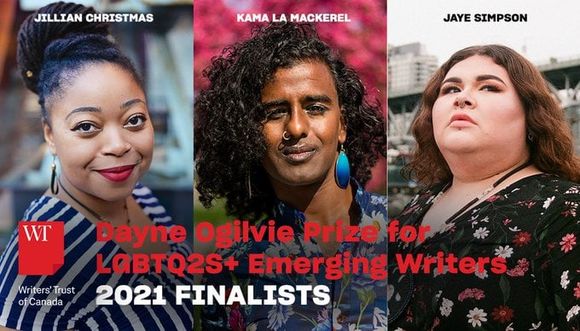 The Writers' Trust's Dayne Ogilvie Prize for LGBTQ2S+ Emerging Writers, one of the few prizes in the CanLit landscape to focus on queer writers, boasts an incredible track record, with a past winners and nominees list that include Zoe Whittall, Vivek Shraya, Joshua Whitehead, and Farzana Doctor, to name only a few of those who went on to major literary acclaim.

So it's always an exciting moment when the shortlist is announced, as it was today, with three emerging writers nominated for the award by a jury composed of Daniel Allen Cox, Eva Crocker, and Danny Ramadan.

The Nominees for the 2021 Dayne Ogilvie Prize for LGBTQ2S+ Emerging Writers:

Robin Pacific established the Dayne Ogilvie Prize in 2007 to honour her late friend Ogilvie, who was an acclaimed editor, writer, and literary manager. There is no age restriction on the prize, and it considers a writer's entire body of work to date.