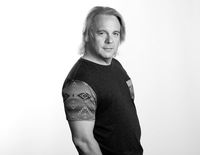 In playwright, novelist, and screenwriter Drew Hayden Taylor's new book, Chasing Painted Horses (Cormorant Books), an innocent act of encouragement from a parent has far-reaching consequences. When Ralph and Shirley's mother brings home a chalkboard and challenges her children and their friends to participate in a weekly drawing competition, no one expects Shirley to sketch a horse so beautifully that her abilities change all of their lives.

The fairy tale-esque quality of Chasing Painted Horses and Taylor's strength as a storyteller and keen, funny observer of human nature make for an unforgettable novel. Set on a reserve north of Toronto and populated with characters who stick with a reader long after the book is closed, it's witty, touching, and

We're excited to welcome Drew to Open Book today to talk about Chasing Painted Horses through our Long Story novel interview series. He tells us about how this novel was 20+ years in the making, the joy of a good "I'm done" dance as part of the writing process, and what writing this novel taught him.

The origins of this story go back several decades. It began over a dinner party where a friend told me about her mother the 'crunchy granola' type who once let kids draw on a wall in her house. There, a little shy girl would show up and draw the same horse over and over, for several weeks, and then she stopped coming. My friend wondered what ever happened to her. This story stuck with me and I began to wonder about that too. So gradually, that wine filled story turned into a short story, and then into a one act play. But I felt there was more to tell there and it kept tugging at me, so I decided to write it as a novel. So it was a novel that was 40 years in the making - from the perspective of my friend, or 20 from my perspective.

The setting of the story as originally told was a house in Ottawa. But in developing the story dramatically, I decided to place it on a thinly veiled version of my First Nation community. I thought the story could also be a larger reflection of issues and problems existing in many Indigenous communities.

No. The ending never changed. It's the same in the short story, and in the play, but more fleshed out, and explored a bit more deeply. Except for the last two pages. That was new and I think really wrapped up the story.

I don't know if I had a favourite character, they are all special to me. Of course Danielle is the most sympathetic, Ralph is the most relatable, but for some weird reason, William was kind of fun. I liked to describe him as the bully who grew up to bully other bullies.  And I think it's really interesting that at one point in the story, you actually feel sorry for the bully.

Because I had been carrying around this story, and explored it in other ways already, writing this novel was a special effort. I felt I was giving this story, and Danielle, the attention and effort she deserved. And when I finished the first draft I was happy. Unfortunately, being a first draft, it needed some reworking. But when I finished the second draft, it said what I wanted it to say, and I did my usual "I'm done!" dance.

I dedicated my novel to the woman who originally told me the story so many years ago.

I learned that sometimes, the story isn't finished being told. It never is. I think I may have learned that from my Indigenous heritage, or maybe that's true of all writers.

Drew Hayden Taylor has done many things, most of which he is proud of. An Ojibway from the Curve Lake First Nations in Ontario, he has worn many hats in his literary career, from performing stand-up comedy at the Kennedy Center in Washington D.C., to being Artistic Director of Canada’s premiere Native theatre company, Native Earth Performing Arts. He has been an award-winning playwright (with over 70 productions of his work), a journalist/columnist (appearing regularly in several Canadian newspapers and magazines), short-story writer, novelist, television scriptwriter, and has worked on over 17 documentaries exploring the Native experience. Most notably, he wrote and directed Redskins, Tricksters and Puppy Stew, a documentary on Native humour for the National Film Board of Canada.