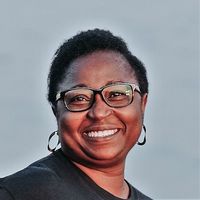 Yejide Kilanko's new novel A Good Name (Guernica Editions) tells the complex story of a tumultuous marriage. Frustrated after twelve unfulfilling years in America, Eziafa returns home to Nigeria to find an appropriately traditional wife. 18-year old Zina has no intention of marrying a man twenty years older than her or derailing her dreams, but cultural and family forces means that before she knows it, she and Eziafa are married, living in Houston, and Zina has been pushed into a nursing job she never wanted.

The clash between Eziafa's old ways and Zina's determination to change with the times and be her own person is both a deeply personal story of two people struggling with individual and cultural pressures, as well as an essential commentary on marriage, the immigrant experience, and the human heart. Tough and insightful, A Good Name is unflinching and stays with the reader long after closing.

We're excited to announce that Yejide will be our October 2021 writer-in-residence on Open Book. Get to know her here today as we discuss A Good Name as part of our Long Story interview series, and stay tuned to the writer-in-residence page throughout October to read Yejide's original writing.

Today she tells us how the novel's evolving working titles showed its growth, how a chance encounter in an airport led to her touching dedication, and about the valuable lessons she learned from writing A Good Name.

I started writing A Good Name in October 2010. I was still editing my debut novel, Daughters Who Walk This Path, and I needed a periodic distraction. The decision to weave a ripped from the headlines plot fictionalizing the heartbreaking domestic violence stories of some Nigerian nurses living in America made sense. I usually write on themes that make me think.

Because I can’t start my stories without naming them, I called the manuscript A Good Thing. I forgot that the novel started with that name until I had to write this interview and searched for my early drafts.

As the story and I evolved, A Good Thing became When Land Spirits Cross Big Waters, A Deep and Distant Shore, A Pocketful of Dreams, and Moldable Women.

The final title came from a character’s name. Eziafakaego means, “A good name is better than money.” I guess the novel was determined to hold on to its goodness.

The settings for A Good Name are Nigeria and Houston, Texas. I chose Nigeria as a setting because the story is about Nigerian immigrants. I was also born in Nigeria and lived there for the first twenty-four years of my life.

I picked Houston because my research established that Texas has the largest Nigerian expatriate population in America. I’m yet to visit Texas. The beauty of the internet is that you can make virtual visits to places you have never been.

The ending did. In about the first five of many drafts, the story focused on two Nigerian couples. One couple, Eziafakaego and Zina, lived in Texas, while the second couple lived in Maryland. I wrote the initial ending around the Maryland couple. Four years into writing the novel, I made the hard decision to split the 100k-word manuscript into three books. A Good Name was book number two.

It’s a toss-up between Jovita and Nomzamo. I like women who step out of line.

A Good Name’s dedication reads: To Rachel and the sisters we lost.

Twenty years ago, I was newly married and travelling to America for the first time when I met Rachel at the Amsterdam Airport Schiphol. Like me, Rachel was Nigerian, a new bride, and going to join her husband. That airport encounter was the beginning of an enduring connection.

A Good Name is about love, tradition, friendship, change, possibilities, and the weighty expectations which keep us bound to those we leave behind.

I learned that some dreams need time to mature, timing is critical, stories find those who believe in them, and that I can do hard things with help—lots of it.

Yejide Kilanko was born in Ibadan, Nigeria. A writer of fiction and poetry, Kilanko’s debut novel, Daughters Who Walk This Path, a Canadian national bestseller, was longlisted for the inaugural Etisalat Prize and the 2016 Nigeria Literature Prize. Her work includes a novella, Chasing Butterflies (2015), two children’s picture books, There Is An Elephant In My Wardrobe (2019), and Juba and The Fireball (2020). Her short fiction is in the anthology, New Orleans Review 2017: The African Literary Hustle. Kilanko lives in Chatham, Ontario, where she also practices as a therapist in children’s mental health.

Twelve years in America and Eziafa Okereke has nothing to show for it. Desperate to re-write his story, Eziafa returns to Nigeria to find a woman he can mold to his taste. Eighteen-year-old Zina has big dreams. An arranged marriage to a much older man isn't one of them. Trapped by family expectations, Zina marries Eziafa, moves to Houston, and trains as a nurse. Buffeted by a series of disillusions, the couple stagger through a turbulent marriage until Zina decides to change the rules of engagement.

*Please note that this title has a content warning for domestic violence.