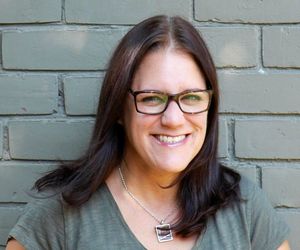 What would you risk to go to school? In Secret Schools: True Stories of the Determination to Learn (Owlkids, illustrated by Erin Taniguchi), Heather Camlot shares the amazing, and at times astonishing, stories of incredibly brave kids and adults risking everything to learn in secret when the powers that be want to keep them uneducated.

With 15 true stories, including tales of women in Afghanistan attending schools disguised as "sewing circles" and enslaved Africans in the United States risking brutal punishment, Camlot takes readers on a tour of the power of education and the lengths to which many courageous people have gone to receive—and give, in the case of the teachers and organizers—knowledge.

A stirring reminder of what we often take for granted and how education can empower, Secret Schools is written to be accessible for middle school readers, but inspiring for readers of any age.

To celebrate the publication of Secret Schools, we're talking to Heather about the books that have been powerful in her life. She tells us about the book that made her laugh on the very first page, the iconic kids' book she considers "mandatory reading", and the classic 20th century novel that first nudged her on a path towards social justice and activism.

A book that made me laugh out loud

I recently read The Yark by Bertrand Santini, illustrated by Laurent Gapaillard and published by Gecko Press. I received the novel as a review copy and I burst out laughing on page 1! The back-cover copy sums up the story: “The Yark loves children. He loves the crackle of their little bones between his teeth... But he has a problem. His delicate stomach can only tolerate very good children and the well-behaved ones are hard to find. Then the Yark meets delicious, sweet Madeleine. Can he gobble her up?” It’s so dark and funny and clever. And of course, There’s a Monster at the End of this Book by Jon Stone is a classic that makes me laugh every time.

The book I have re-read many times 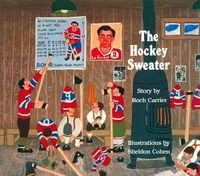 Well, along with There’s a Monster at the End of this Book, it would be The Hockey Sweater by Roch Carrier. Although I am not much of a hockey fan, I am a proud Montrealer and I believe this book is mandatory reading. I’m in a battle with an American author-friend who thinks The Hockey Sweater has the worst ending in the history of endings. He’s wrong.

A book I feel like I should have read, but haven't

This question is great timing! This summer I set myself the task of reading children’s books that I’ve never read, but feel I should have. So far, I’ve read Speak by Laurie Halse Anderson, When Hitler Stole Pink Rabbit by Judith Kerr, Harriet the Spy by Louise Fitzhugh, A Monster Calls by Patrick Ness and This One Summer by Mariko and Jillian Tamaki. Next on the list, Kit Pearson’s Awake and Dreaming or The Sky is Falling. Friends and colleagues rave about all of her work, never mind the fact that she is a beloved, multi-award-winning Canadian children’s author and a lovely human being.

It’s funny, as a kid I was never into social justice or activism or intolerance. I lived in my own little world and really had no idea what was going on outside of it. And yet now I write books about these larger issues. I think I started becoming more aware as a teenager, when I was reading a lot of John Steinbeck, for high school and on my own. Of Mice and Men particularly struck me, a quiet story about dreams and dread, friendship and alienation, humanity and dignity. I’m also a huge Sherlock Holmes fan and I think those stories taught me to ask questions, observe, be skeptical, and dig deeper. I should also say I watched a lot of television and movies as a kid and that definitely influenced my love of writing dialogue, and I listen to music all the time and lyrics can inspire whole scenes when I’m writing a novel.

The middle-grade novel Okay for Now by Gary D. Schmidt. This is the book that inspired me to write; I was reviewing it for a parenting website, and as I read it, suddenly all the stories in my head made sense, had purpose. I didn’t know you could write a book like this – this funny, touching, quirky, tremendous novel about a teenager who wants to shed his “thug” reputation and does so by finding redemption through art. I love pretty much everything Gary Schmidt writes and his words have taught me a lot about writing and the kind of writer I want to be. I also recommend The Dogs by Allan Stratton. That YA novel is a psychological thriller masterpiece. You have no idea what’s real and what’s going on until the final pages.

The commonly used literary trope that ruins a book for me

I can’t handle animals and humans having conversations with each other. Animals talking to animals like in Charlotte’s Web by E.B. White or Fifteen Dogs by Andre Alexis isn’t a problem (and yes, there was one dog in the latter who spoke to a human, but they acknowledged the impossibility of that). Don’t get me wrong, I’d love to know what my dog is thinking, but... just no.

A possible title for my autobiography

Just make a decision already. I had a list of four of five titles then asked my family to help narrow it down. They didn’t even hesitate. Looking at the answers to the previous questions and the impossibility of me picking just one book for any of them, it does seem appropriate.

Award-winning writer Heather Camlot is the author of the non-fiction book What If Soldiers Fought with Pillows?, as well as two novels for young adults. A journalist for more than 20 years, she has written, edited, and translated for various print and online publications. She lives in Toronto, Ontario, with her family.

Secret Schools: True Stories of the Determination to Learn

Can you keep a secret? What if it meant hiding from your loved ones, sneaking out late at night, or risking imprisonment? And what if that secret was that you were going to school?

From covert classrooms created by enslaved Africans in the United States, to academic schools disguised as “sewing lessons” for women in Afghanistan, to espionage schools run by powerful governments, Secret Schools explores the hidden classrooms that have opened their doors so children and adults could learn.

Vivid linocut illustrations and interesting facts enhance the book’s 15 true stories of resilience and courage in the pursuit of education. Accompanying profiles for each story introduce readers to an important person who played a significant role in each secret school. Concluding with a look at inventive approaches to education in today’s world, this deep dive into clandestine learning will invite readers to think deeply about the meaning of education and the barriers many face in accessing it.