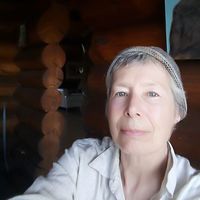 Self, land, ownership - as our understanding of these concepts because to evolve and grow, we find ourselves making new connections and relationships. In Susan Buis' Gatecrasher (Invisible Publishing), the poems explore this expansion, whether on the personal or collective level, in light of reconciliation and our changing environment.

Surreal but clear-eyed, these insightful pieces ask - and hope - about what comes next as human-built systems are revealed for the fragile things they are.

We're excited to welcome Susan to Open Book today to talk about not only the poems in Gatecrasher but her identity and experiences as a poet through our Poets in Profile series. She tells us about an unexpected and violent incident that became a roundabout path to poetry, give permission to junk a piece that isn't working, and shares the best and worst parts of being a poet.

I once lived in Los Angeles and one sunny afternoon a young woman’s body was found in the alley behind our neighbour’s house. She had been killed elsewhere then pushed from a vehicle onto this quiet suburban alley. I was afraid to walk there after, afraid of the reverberations, the haunting, but I was studying photography at Cal State Long Beach so decided to confront my fears and record the place where she had lain. Novena candles, a handwritten note. and bouquet of flowers in a juice glass had been left beside the terrible shadow on the concrete. To photograph with a 4 x 5 film camera is tricky as you load the film into the camera one sheet at a time by touch inside a lightproof bag, then using a couple of dials you focus the image on a glass screen on the camera’s back. It’s all quite finicky but with the large negative comes a lot of potential for fine detail, subtlety, and depth of field. I was curious about the woman and researched her story, followed it through news of an arrest, trial, and then finally to news on a death row chat site. I was also studying writing and thought that this sequence of actions: contemplation, framing, focus, craft, research, could be done with words as well. What started as a photo assignment ended up as a long nonfiction piece.

I’ve always spent a lot of time listening to music. When I was young I was a huge fan of multimedia/performance artist Laurie Anderson. Still am. She has a piece on her Mr. Heartbreak album "Blue Lagoon" which incorporates Ariel’s song from The Tempest: full fathom five /my father lies/... Anderson has a sweet singsong-y kind of voice, and I was really taken by it: her combining of the mundane and the strange, of narrative with melody and electronica—the first time I ever liked Shakespeare.

"My life had stood - a loaded gun -" by Emily Dickinson. How’s that for a title! I did my MFA in the states and we studied a lot of Emily Dickinson, also Bukowski, which is a weird combination. Because of my preconceived and incorrect notions about her work, I would never have spent time with Dickinson if not for class assignments. But I’m in awe of her writing, so cryptic with its coded markings and immense metaphorical rage that releases in a necessary and utterly controlled way like a vent of steam. It’s no surprise she also writes about volcanoes. In this poem she speaks in the voice of the shotgun that waits to come to life when her "Master" carries her to the woods to kill does, and at night lies beside her "Master’s Head –". I get the feeling this gun has its ambivalent "Yellow Eye" on that head. A close second is her "I heard a fly buzz - when I died-".  Dickinson’s brilliance is best observed in her handwritten manuscripts. Her writing always makes my heart beat faster.

If I struggle along, it usually means that there’s a flaw in its logic or conception, or that it has been ruined with sentiment— those poems are usually doomed to the trash, but sometimes I can recycle one line for something else. It’s okay to throw out a poem.

This Wound is a World by Billy-Ray Belcourt tore me up. The body as locus of desire and pain, loss and triumph. Loss and sadness are themes I can relate to, though Belcourt speaks from a much different perspective than my own, but so honest and passionate with lines that go straight through my eyes to the heart. But I have to add that Stevie Howell’s "I welcomed the wound &" from I left nothing inside on purpose is a link poem that connects the two collections for me. I read them at the same time and found them both astonishing.

The worst is that many readers won’t read closely. It’s like when you spend hours prepping and cooking a meal and it’s eaten in minutes. The best thing is that people call you a poet.

Susan Buis lives on an acreage near Kamloops and teaches at Thompson Rivers University. Her writing has appeared in CV2, Vallum, Grain, Event, Prairie Fire, The Malahat Review, and The Fiddlehead, and has won awards from some of these journals. Her writing has been longlisted for CBC Canada Writes several times. A chapbook, Sugar for Shock, winner of the John Lent Prize, is available from Kalamalka Press.

In light of movements toward reconciliation, these poems revisit and revise concepts of self and land.

The poems in Gatecrasher reimagine social and familial relationships, personal and collective failures, and false nostalgias. Part surreal autobiography, and part observation of how physical and conceptual human-made structures are collapsing, this wildfire debut dreamwalks through the liminal space between expectation and disappointment, and the poet’s relationship to the BC landscape.