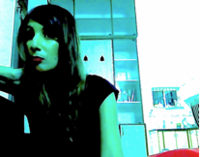 Tara Atluri's Uncommitted Crimes: The Defiance of the Artistic Imagi/nation (Inanna Publications) takes it title from a quote by Theodor Adorno, who said "every work is art is an uncommitted crime". Pointedly engaging with political activism, social oppression, and community resistance, the interviews in Uncommitted Crimes bring together artists in various genres and formats. Through these discussions, Atluri asks tough and intelligent questions about western nationalism, the dominance of European ideals, heteronormativity, and more. 65 pages of artwork are included to give the reader context for the challenging, engaging pieces the artists in these pages are creating.

Tara shares a personal essay here today as part of our At the Desk series, describing her experiencing living and writing in Bangalore's Kaval Bairasandra neighbourhood. She talks about belonging and identity, the political and personal power of words on a page, and "the infinite prose of faith".

At the Desk with Tara Atluri: Ringtones and Calls to Prayer, The Elegiac Prose of Kaval Bairasandra

My writing has been framed by living between many places, in the interstices of belonging.

Palestinian poet Mahmoud Darwish once wrote that “…exile is more than just a geographical concept…”  Born in Canada to Indian parents, I write as an exile everywhere. I have written in cities that are as foreign as my face is everywhere and as familiar as this feeling of putting words on a page. I currently live in Bangalore, India.

In Toronto, in London, in New Delhi and here, my workspaces are as disparate and cluttered as the disjointed sound of a world of languages. A woman screams on a city street in a language that has become as distant to me as lost baggage turning endlessly in Western airports.

Well-financed Indians flee to Heathrow and La Guardia, losing a language to gain a currency. The promises of bigger malls and whiter people offer salve for the lingering anxieties of colonialism.

The exchange rate of dead languages is as slow as water dripping from a tap in a country of dehydration and imported beer. Testaments to progress are prophesied in English language whispers and the drunken tongues of global finance.

In a time of limitless excess and little patience for thought, an Indian city becomes a curious outpost where one can lose oneself in the found poems of a city street. 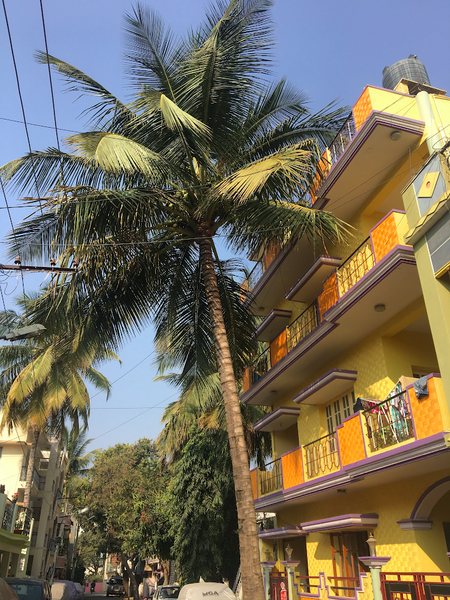 Girls with braids in their hair scatter across the concrete floor of the city, leaving pitter patter laughter and sounds of clinking anklets hanging in the air like the smell of sweet things sweltering at roadside stalls.  There is a confounding set of paradoxes that unfurl like tattered flags across the streets of the city. That beggar so thin and dark who drags himself across pavements, might stop long enough so you can count his ribs the way city socialites count calories in a nation of farmer suicides and beef bans.

In a country of rampant female illiteracy, I read and write in ways that express all of the profound inequality and possibility of words on a page.

I have written in spaces as distant in geography and ideology as the expansive cathedral like halls of the British library, and the congested streets of Bangalore where I sit at a café in an outpost of Empire as the traffic flows.

I write and live in a neighbourhood in Bangalore called Kaval Bairasandra, known as a place where many working class Muslims reside in the city of Bangalore.  This is a country that has elected Narendra Modi to the position of Prime Minister. Modi has been implicated in religious fundamentalist violence, with some suggesting he played an active role in the Gujarat riots of 2002 where many Muslims were raped and slaughtered by Hindus who form the majority of this country.

The sun shines over this part of the city. The palm trees tower over buildings in brilliant hues. There are men in white with beards as thick as mythologies beyond all worldy translations.  Women in black, cloaked in an elegy of ancient prophecy saunter these streets. You can, in Kaval Bairasandra, learn to see a smile through the eyes of a veiled woman who greets you with patience and remarkable grace.

I follow the day through the slow gait of an old man dressed in white linens, his head lined elegantly with a topi. He sits on that same corner and reads a book that rests in his worn palms. Kaval Bairasandra evades set scales of time and ledger. It is fast and chaotic, with the hands of workers that never rest, making food and quickly passing cash across counters.

Rickshaw wallahs hustle the city like Olympian racers, returning to this part of the city in the evening. The pace here is set by the slow gait of an Uncle still sitting with a book resting in his worn palms. 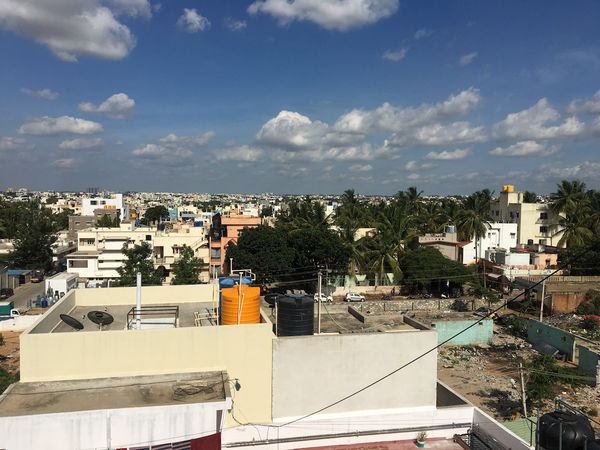 In the everyday tempo of city life, Kaval Bairasandra, is an enduring prayer in a world moving at manic speeds with cruel indifference to those who believe in anything but money.  To write here, in a time in which Muslims are banned from crossing borders, in a time in which holy words are translated into national security threats and international paranoia is as sacred as the silence a writer can find here.

One can lose track of whole hours and days when they write. There are days when the hours on the clock seem frozen and others where a writer looks up from the text and realizes that in the time they have committed words to the page other people have married, had children, done grocery shopping, interacted with other human beings, cleaned their home and perhaps gotten a hair cut.

From my desk in a Muslim enclave in the Indian subcontinent, I keep the time through the infinite prose of faith, a far cry from iPhone ringtones and google calendar reminders. I can hear the call to prayer from where I write. The sound of God is as foreign to me and perhaps to most of the secular capitalist world as the idea that writing is a joy in itself, beyond professional cover letters and book deals.

The kindest faces and oldest ideas are left to sit in silence in Kaval Bairasandra, like that old man with the slowest gait who remains on that same corner with his book resting delicately in his worn palms.

The musicality of the timely sound of someone singing praises to Allah causes me to pause and look up from the page, to look away from the screen. It is not an interruption but a reminder of something greater than myself, of some belief in that which cannot be seen.

A writer can write anywhere, but to write in a space that offers infinite wisdom is a blessing.

Tara Atluri has a PhD in Sociology and has taught classes in gender studies, visual cultures, politics, and media studies at scholarly institutions throughout the world. She has also held several research fellowships at universities throughout Europe and Asia. As an artist and performer, she has participated at exhibitions and events such as the Edgy Feminist Arts Festival in Montreal, Quebec, and the Feminist Arts Conference held in Toronto, Ontario. Her work has been published in scholarly anthologies and iacademic journals as well as on a number of blogs. Her most recent book, Āzādī: Sexual Politics and Postcolonial Worlds, was published in 2016. She is an active in #WhyLoiter? and other social movements in the Indian subcontinent, throughout the Global South and transnationally. She currently lives in Toronto.

Uncommitted Crimes: The Defiance of the Artistic Imagi/nation

Theodor Adorno once remarked that, "...every work of art is an uncommitted crime." This book is a tribute to political artists who deviate from the mainstream and create art that engages with questions of societal oppression, survival, and resistance. It draws on interviews with transnational artists whose work is representative of emerging trends in art, visual culture, and political aesthetics. Uncommitted Crimes reflects on a new generation of artists whose creative praxis, sensibilities, influences, and frames of reference derive from multiple national, religious, and cultural genealogies, and an ambivalent relationship to Western and European nationalisms. Courageously, these racialized, Indigenous, and migrant artists straddle the divides of many categories of identity in regards to gender, sexuality, and 'race.' Their art challenges the silently imbibed worship of whiteness, heteronormative patriarchies, and colonial settler ideologies of "home." These exceptional cultural producers enter into uncomfortable dialogues, creatively. Inspired by their visionary praxis, this book is an uncommitted crime, attempting to smuggle arresting artistic ideas into a site of intellectual imagi/nation. Artists whose works are explored in this book include: Andil Gosine, Syrus Marcus Ware, Elisha Lim; Amita Zamaan and Helen Lee; Shirin Fathi; Kara Springer; Rajni Perera; Joshua Vettivelu; Brendan Fernandes; Kerry Potts and Rebecca Belmore; The Mass Arrival Collective (Farrah Miranda, Graciela Flores Mendez, Tings Chak, Vino Shanmuganathan, and Nadia Saad.)