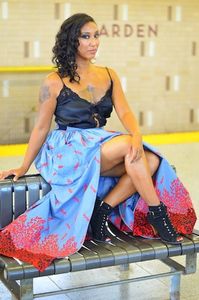 Catherine Hernandez's Scarborough (Arsenal Pulp Press) is a force to be reckoned with. Filled with the vibrant voices of a struggling but tight-knit community in the titular city, the story immerses the reader in myriad complex emotional landscapes. From Hina, the Muslim school worker fighting for her students, to Bing, a young gay Filipino boy whose father suffers from mental illness, the cast of characters is large and varied. Hernandez, however, has no problem managing multiple voices, creating a choir-like narrative that is even more than the sum of its parts.

It's no mean feat, and it's no surprise that Scarborough is already receiving accolades for it, having been named the winner of the Asian Canadian Writers' Workshop Emerging Writers Award in 2015, and a finalist for the 2016 $50,000 Half the World Global Literati Award for best unpublished manuscript.

We're pleased to welcome Catherine to Open Book today so we can get to know this essential new voice in CanLit through our Dirty Dozen series (which asks authors to share 12 facts about themselves). She tells us about blood stained mementos, her very impressive toddler-whisperer skills, and the sweet reason why you might see her rocking back and forth while writing.

Catherine Hernandez is a queer theatre practitioner and writer. Her plays Singkil and Kilt Pins were published by Playwrights Canada Press. Her children's book M is for Mustache: A Pride ABC Book was published by Flamingo Rampant. She is the Artistic Director of Sulong Theatre for women of colour. She lives in Scarborough, Ontario.

A poignant, multi-voiced novel about life in the inner city.

Scarborough is a low-income, culturally diverse neighbourhood east of Toronto, the fourth largest city in North America; like many inner-city communities, it suffers under the weight of poverty, drugs, crime, and urban blight. Scarborough the novel employs a multitude of voices to tell the story of a tight-knit neighbourhood under fire: among them, Victor, a black artist harassed by the police; Winsum, a West Indian restaurant owner struggling to keep it together; and Hina, a Muslim school worker who witnesses first-hand the impact of poverty on education.

And then there are the three kids who work to rise above a system that consistently fails them: Bing, a gay Filipino boy who lives under the shadow of his father's mental illness; Sylvie, Bing's best friend, a Native girl whose family struggles to find a permanent home to live in; and Laura, whose history of neglect by her mother is destined to repeat itself with her father.

Scarborough has already received recognition as winner of the Asian Canadian Writers' Workshop Emerging Writers Award in 2015, and finalist for the 2016 $50,000 Half the World Global Literati Award for best unpublished manuscript. It offers a raw yet empathetic glimpse into a troubled community that locates its dignity in unexpected places: a neighbourhood that refuses to be undone.