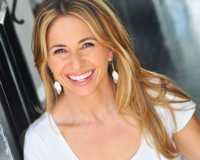 Food Network junkies will recognize Julie Zwillich from Summer's Best, but it turns out she is just as talented at whipping up stories as she as with tasty dishes. Her debut children's book, Phoebe Sounds it Out (Owl Kids), is bursting with charm and heart. The story follows Phoebe, who struggles with her teacher's instructions to sound things out, given her less than phonetic name. Phoebe is funny and relatable, and Denise Holmes' illustrations combine with Julie's text to create a great tale about doing your best, making mistakes, and being proud of yourself even when you're imperfect.

We're excited to have Julie on Open Book today to take our Dirty Dozen challenge, where we ask authors to share 12 unexpected facts about themselves. She tells us about why the smell of chocolate is scary, her Judy Blume connection, and disobeying Shel Silverstein.

You can also check out the adorable trailer for Phoebe Sounds It Out here.

Julie Zwillich is best known as a television personality, writing and hosting shows on Food Network (Summer’s Best), CBC (Surprise! It’s Edible Incredible!) and TVOKids. She is also an actor, voiceover artist, and producer. Phoebe Sounds It Out is her first book. Julie lives in Bend, Oregon with her husband and twins. Julie has dual citizenship in Canada and the United States.

Phoebe Sounds it Out

Meet Phoebe. Unfortunately, her name doesn’t look quite like it sounds. At school, her classmates practice writing their names, but Phoebe struggles. Her teacher tells her to “just sound it out.” Phoebe doubts herself and procrastinates before resolving to try. Readers are privy to her funny, endearing interior monologue and little-kid rationale as she writes the result: FEEBY.
Told in a relatable, introspective voice, this school story conveys the feelings and worries of a 5-year-old and supports learning about sounds and letters. Readers will see from Phoebe’s fellow kindergartners’ attempts that everyone makes mistakes, and that we can take pride in effort and not just perfection.