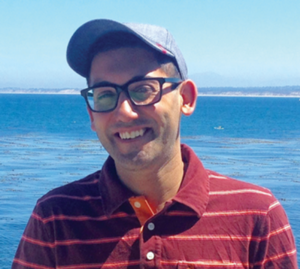 Trillium Prize winner Pasha Malla's new novel Fugue States (Knopf Canada) tells the story of Ash, an intellectual, anxious radio host, and his uncouth, entitled nightmare-bro of a friend, Matt, who shows up just after Ash has lost his father.

When Ash discovers an unfinished novel his father left behind, he longs to return to his father's homeland of Kashmir to make sense of the parent he knew so little. Things get particularly interesting when boorish Matt steps up to take the trip that Ash finds himself unable to face, commencing the start of a story equal parts hilarious, cringe-inducing, and insightful.

We're excited to welcome Pasha to Open Book today to take our Dirty Dozen challenge, where we ask writers to share twelve unexpected facts about themselves.

He tells us about his numerical obsession, shares a switchblade story with a surprise ending, and gives an extremely memorable description of a plate of truly terrible eggs.

The Dirty Dozen, with Pasha Malla

1. Half my face is held together with metal plates, screws and brackets.

2. I once got stuck in quicksand in Western Australia.

4. I've never punched another person in the face.

6. Once a woman pulled a switchblade on me in a bar, held it to my throat and flicked the switch -- and out came a comb. "We're soulmates," she told me, and tenderly combed my beard.

7. I think my favourite album of all-time is probably They Spent Their Wild Youthful Days in the Glittering World of Salons, by Swirlies.

8. My favourite food is sandwiches. Though once in California my partner and I were served what we are pretty sure were poop sandwiches and I didn't like that one at all -- still, not the worst meal of that trip, which was a plate of huevos rancheros so bad they tasted sarcastic.

9. I have a pretty small head.

10. There is rarely a moment that I don't have at least one cut or abrasion somewhere on my hands.

Pasha Malla is the author of five works of poetry and fiction, including the story collection The Withdrawal Method and the novel People Park. His work has won the Danuta Gleed Literary Award, the Trillium Book Prize, an Arthur Ellis Award and several National Magazine awards. It has also been shortlisted for the Amazon.ca Best First Novel Award and the Commonwealth Prize (Best First Book, Canada & Caribbean), and longlisted for the Scotiabank Giller Prize and the International IMPAC Dublin Literary Award. Pasha is a monthly books columnist for The Globe and Mail, and a regular contributor to Newyorker.com, The Walrus and CBC Radio. He lives in Hamilton, Ontario.

Fugue States begins as Ash Dhar, a thirty-something writer, opens his mouth to deliver a eulogy at a funeral—the funeral for his own father, a Kashmir-born doctor. But in that moment between thought and speech, something mysterious occurs: a terrible wordless gap into which Ash falls helplessly, recovering only as the concerned faces of friends and family shock him into focus. Later, still unsettled as he sorts through his father’s belongings, Ash discovers a partially completed and baffling work of fiction set in what seems to be Kashmir. Reading his father’s words, Ash feels compelled to know more about this ancestral land—and yet he resists the impulse to visit, loathe to be a cliché, chasing self-discovery in a war-torn homeland. But Ash’s childhood friend Matt— pothead, massage therapy student and selfdescribed “maker of memories”—has no such hesitations and goes in Ash’s place . . . with unexpected and excruciating results. Soon, Ash is forced to rescue Matt by following him to India— where he experiences a second alarming gap, one that echoes and amplifies the mysterious “fugue state” with which the novel began.

Fugue States is at once a parody of clueless tourism; a knowing, uneasy look at contemporary masculinity; and a surprisingly poignant tale about the deep inchoate melancholy that abides in people who, like Ash and his father, and even Matt-the-fool, have never felt completely at home in the world.