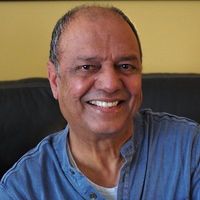 The years from 1939, the beginning of the Second World War, into the 1960s were a time of enormous change. And that change was by no means limited to the war and its aftermath in Europe. In his new novel Paper Lions (Mawenzi House), Sohan S. Koonar explores India's independence and Partition, war and elections, and more through the voices of Bikram, Basanti, and Ajit, three characters living in Raikot, Punjab.

Their endurance and hope, their pain and struggles, bring modern Indian history to life on the page, as readers watch not only a country, but three distinct individuals, experience enormous change.

We're excited to welcome Sohan to Open Book today to talk about Paper Lions, his second novel, through our Long Story novelist interview. He tells us about the lack of Sikh representation in English literature and crafting Sikh characters partly to address that absence, the very catchy short phrase his agent coined to sum up Paper Lions, and the decision behind the novel's incredibly sweet dedication.

I planned the novel to be set in Punjab, starting with the undivided Punjab and then continuing in the Indian side of Punjab. I was born and partly raised there until age 22 and was familiar with the history, culture, and traditions.

Also, as a Sikh I was disappointed by the paucity of Sikhs in English literature. I hope my effort adds to the meagre offering of novels featuring Sikh protagonists. Sikhs have typically been portrayed as a bit of caricatures as minor characters in many novels and I hope to inspire more Sikh writers so that we correct that.

My agent Sam Hiyate did it the best: the Downton Abbey of India. It surprised me as I had never watched that famous British TV serial and I had to agree after watching a few seasons.

There was a lot of research done to ensure the authenticity of the time periods, the greater historical markers that affected the premise and story line. My father who had lived through the period of the story gave me a lot of insight and factual material. Having attended a course in Ethics in Writing, I was very careful in thoroughly researching the history of the nomadic Bajigars, their culture and traditions as well as social structure so that it was factual and respectful. As there is no literary reference to these tribes as they lacked a written record, my friend found a tribal elder who filled in a lot of the details about their circumstances and lifestyles. It was a fascinating journey to be able to document these as the Bajigars have largely assimilated into the settled society and strayed away from their traditional ways (a sad occurrence worldwide). I feel lucky to have preserved some of their historical record and hope that the novel will encourage members of their tribes to begin telling their stories in their own words.

The most memorable moment was the manuscript analysis of the fourth version by my literary agent Sam Hiyate. His suggestion to redraft it as a multi third person POV allowed me to streamline the storyline and keep it interesting for the reader. I found it much easier than the omniscient style I was using up to then.

Paper Lions is dedicated to my wife Nadia for her perseverance and patience. She was my biggest supporter, edited my writing for grammar before it was presented to others, wrote all the cheques for costs with a smile and shared in my tears and joys.

The art of becoming an author, and how exacting the standards for getting a publisher are. I believe I earned an MFA from sitting at the feet of my editors and my literary agent who is also one of the most skilled editors himself as well as a great teacher. It was one of the most rewarding periods of my life.

Sohan S. Koonar has lived on four continents: Asia, Africa, Europe and North America. A physiotherapist by training, a founder of a multi-clinic company, and a renowned inventor with international patents, Sohan’s hobby of story-telling has won him the Judges’ Choice Award in the Toronto Star Short Story Contest, and the first Burlington Library Literary Excellence Award. He has one previous novel, Karam’s Kismet.