If you've ever known someone who couldn't get over that one old flame, you'll recognize the obsessive protagonist of Nora Gold's The Dead Man. Eve is still fixated on her brief relationship with music critic Jake, five years after their split. The intensity of her focus is surprising even to her, but she can't seem to move on. When Eve returns to where their relationship unravelled in attempt to lay her ghosts and complete a musical project she's been struggling with, the dark details of Jake and Eve's partnership slowly emerge. This moving and original novel explores memory, grief, love, and attachment with nuance and Nora's pitch-perfect storytelling instincts. 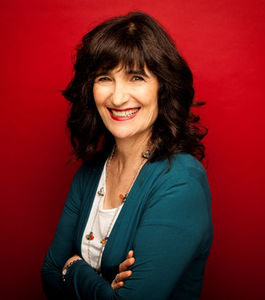 We're pleased to have Nora on Open Book today as part of our In Character interview series, where we talk about some of the most memorable and complex characters in CanLit. Nora tells us about why Eve's original name had to change, what characteristics she shares with her bibical counterpart, and where author and character intersect.

The protagonist in The Dead Man, Eve Bercovitch, is a composer of Jewish sacred music. She is a feminist, a middle-aged widow, a mother to two teenage sons, and a sensible and intelligent woman. Five and a half years ago she had a brief relationship with a married man named Jake, a music critic who ended the relationship after a few months. Yet even after five and a half years, when you meet Eve at the beginning of The Dead Man, she is still not over him. She thinks about him much of the time and is totally obsessed with him.

In addition to being a composer, Eve is a music therapist, so she is well aware of the saying, “Physician, heal thyself.” And she does try to. But for some reason she just cannot recover from this relationship.

Because Eve is a feminist, she considers her obsession with Jake to be not only unhealthy and unnatural, but also embarrassing. Yet she is bright and thoughtful about her situation. For example, here are the opening sentences of the novel:

“She’s never been obsessed before. This is her first time and it’s kind of interesting. It’s like watching some psychopath in a movie, stalking someone, plotting to kill them, except that the psychopath is her.”

I agree that sometimes characters take on a “life of their own.” I think this can only happen, though, when you are really writing – in other words, when you’ve let go of the impulse to control everything, including your conscious intentions and plans for the plot and characters, and your inner editor. The editing process kicks in later. But when I’m really writing, I don’t try to rein in the words or actions of my characters. Even so, characters don’t always take on a “life of their own” during the writing process. So when they do, it is a real gift to the author. In The Dead Man, Eve took on a “life of her own” at various points, surprising me by saying or doing things I hadn’t expected or planned. This delighted me.

This varies from book to book. With The Dead Man, there’s a funny story behind my choice of the name Eve. As I was writing this novel, I found parts of it difficult or painful to write, so to counteract this I wanted a “light” working name for my protagonist. I borrowed the name Penny from a TV show I’d watched as a child, Sky King. Thanks to its main female character, I associated the name Penny with someone light-hearted, chirpy, and not at all intense. Someone very different in tone from my protagonist.

When I finished my first draft of The Dead Man, I sent it to a friend of mine, a musicologist in the USA, asking her if I had made any musical mistakes in my book. She wrote back that I hadn’t, all that was fine. “But,” she wrote, “the name Penny has to go. It reminds me of Penny in Sky King!” I laughed and almost immediately knew the real name that I wanted for my character. It was the name of my friend the musicologist: Eve. Eve is a strong name, an elemental name, and that is how I’d always pictured the protagonist of The Dead Man.

Interestingly, in almost every book talk I’ve given about this novel, someone has asked me during Q&A whether, by choosing the name Eve, I was subtly alluding to Eve in the Bible. Such a thought had never occurred to me. But now that this question has been so often asked, I do see some parallels between my protagonist Eve and the biblical one. For instance, they are both very hungry for knowledge, despite the dangers of acquiring it.

I really don’t “craft dialogue.” I just listen to my characters speak and I write down what they say.

Eve and I share certain things, like a passion for music and a love of Israel. Also, we are both feminists who have conducted feminist research in our respective fields. But there are huge differences between us temperamentally and psychologically. For example, obsessiveness is Eve’s most salient characteristic, whereas I am not obsessive at all.

A collection of stories. The story I am currently working on is different from anything I’ve ever written before. So it’s challenging, but in the best possible way.

Nora Gold, born and raised in Montreal and now living in Toronto, is a prize-winning author. Her recent novel, Fields of Exile, won the 2015 Canadian Jewish Literary Award. In addition to her writing, Dr. Gold is the founder and editor of the prestigious online literary journal Jewish Fiction.net which, in 16 issues, has published over 300 stories from around the world (including translations from 14 languages) and has readers in 140 countries. Gold is also the Writer-in-Residence and an Associate Scholar at the Centre for Women's Studies in Education, at the Ontario Institute for Studies in Education, University of Toronto, where she coordinates the Wonderful Women Writers Series. Last but not least, Gold is involved in activism and community work, currently with the Hadassah-Brandeis Institute in Boston, JSpaceCanada, Heart to Heart, and The Dafna Fund.

The Dead Man is a compelling novel about a woman who is obsessed. Eve, a composer of sacred music and a music therapist, is well aware of the saying, "Physician, heal thyself," but she just can't seem to do this. For some unknown reason, she-- a sensible, intelligent professional-- can't recover from a brief relationship she had five years ago with a world-famous music critic named Jake. This obsession with Jake is a mystery to Eve's friends, and also to her. In an attempt to solve this mystery, she "returns to the scene of the crime": Israel, where Jake still lives, and where they first fell in love. There she revisits all their old haunts and struggles to complete the song cycle she started composing five years ago about Jake but hasn't been able to finish. Gradually the dark mystery behind their complex relationship begins to unravel. Eve discovers the forgotten childhood memories, losses, and desires that are encapsulated in her connection to Jake. And then, inspired by all the music she hears around her (including the singing of birds, the crying of babies, and the honking of cars), she succeeds in finally completing her song cycle and setting her obsession to rest. This novel, filled with music, dealing with themes of love, grief, early loss, and the power of art, will resonate deeply with anyone who has ever loved and lost, and will continue to resound and echo for a long time afterward.