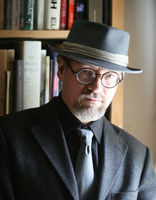 Lewis Carroll's The Hunting of the Snark centres around a gang of fools on a haphazard adventure to track the mythical beast known only as The Snark. Following Bellman, their reckless leader, they embark on their quest without direction, purpose or common-sense; they only know that The Snark must be caught.

Carroll's absurdist poem has long been considered a timeless classic, but award-winning illustrator and author George A. Walker saw it as something new: a perfect allegory for the scandal-ridden administration of President Donald Trump. In a new, limited-edition release of The Hunting of the Snark (Porcupine's Quill), Walker's painstaking, hand-made wood engravings pair Caroll's words with images of prominent figures in Trump's cabinet, reinterpreting the poem as a satire of modern American politics.

We're incredibly thrilled to have George at Open Book today, where he discusses Carroll's original work, the inspiration for his reimagining, and what he absolutely needs to create gorgeous wood engravings.

I have a private press with Andy Malcolm that is known as The Cheshire Cat Press. We publish a variety of things by Lewis Carroll all handmade and in limited editions of 42. (Carroll was a mathematician, and he repeatedly references the number in his works, including Alice’s Adventures in Wonderland and The Hunting of the Snark.) Cheshire Cat Press decided to publish a hand-printed limited edition of The Hunting of the Snark, with illustrations by Byron Sewell. It was an opportunity to publish two separate versions: one with carte-de-visite images that Andy Malcolm has collected, and one with wood engravings that I would create.
When I reread the poem I was struck by the similarities between Carroll’s characters and President Donald Trump and his cabinet of advisors. The plot follows a crew of ten unqualified professionals trying to hunt a Snark with a blank map. We are not told what a Snark looks like, and none of the crew has any experience hunting one. When you read the poem and think of Trump’s cabinet, it’s hard not to see the parallels. The political arena in the USA could be described as nonsense, which is exactly the type of poem the Snark is.

Yes! What is a Snark and how does one go about catching one? That’s the mystery of the whole poem. Like the mystery of Donald Trump, the poem itself is shrouded in mystery as the author intended. Carroll infused the poem with signs and symbols that scholars have been deciphering since its publication. Some say it is a poem about hubris, others declare it to be a poem about death and an allegory about tuberculosis (his godson was dying of tuberculosis when he was inspired to write the poem). Still others believe it is a poem about tragedy, futility, folly of power, frustration, bafflement, nonsense and existential angst. Whatever one thinks about it—Carroll denied that his poem had any meaning whatsoever. My interpretation is that Carroll was foreshadowing Mr. Trump.

What do you need in order to work – in terms of space, food, rituals, instruments?

There is definitely one thing I cannot do without: a piece of maple wood. All my images are written on the end-grain of a maple wood block that is precisely .918 thousands of an inch thick—the exact thickness required to print the blocks on my Vandercook Proof Press (an SP15). I also need my tools to engrave the block. They include spitstickers, lining tools, lozenge gravers and my Dremel power tool for removing large areas on the block. A good can of ink is essential and a nice rag paper to impress the block into completes the task.

What do you do if you're feeling discouraged during the process? Do you have a method of coping with the difficult points in your projects?

Funny thing is I’m never discouraged unless my graver slips on the surface of the block. If this unfortunate thing happens, I must recut the block as the image is ruined. My graver only slips when I am listening to the news and I hear another ridiculous quote from Mr. Trump.

A great book should take you down a rabbit hole and leave you with many experiences, slightly exhausted at the end and wondering if there is a wonderland or a Queen of Hearts or more wonder than worry. I would suggest my favourite books are Lewis Carroll’s Alice’s Adventures in Wonderland and George Orwell’s 1984.

It’s a secret — but, since you asked, I am working on a book about the life of Mary Pickford. This is a project I’m undertaking for my personal private press (not with the Cheshire Cat Press). I have already made 87 wood engravings (Mary Pickford was 87 when she passed away) and I plan on making 35 copies for the limited edition. The Porcupine’s Quill will be printing a paperback edition.

George A. Walker is an award-winning wood engraver, book artist and author whose courses in book arts and printmaking at OCAD University in Toronto, where he is Associate Professor, have been offered continuously since 1985. His artworks are held in collections ranging from the Fisher Rare Book Library, University of Toronto, The Morgan Library & Museum, New York, and The Museum of Modern Art (MoMa), New York City and he has had over 15 solo exhibitions as well as been included in more than 100 group shows. Among many book projects—both trade and limited edition—Walker has illustrated 2 hand-printed books by internationally acclaimed author Neil Gaiman. Walker also illustrated the first Canadian edition of Lewis Carroll’s Alice’s Adventures in Wonderland and Alice Through the Looking Glass, both published by the Cheshire Cat Press. The Cheshire Cat Press is a partnership between Andy Malcolm and George Walker which continues to publish limited edition books featuring the writing of Lewis Carroll.

George Walker was elected to the Royal Canadian Academy of Art in 2002 for his contribution to the cultural area of Book Arts. He is also a member of the Arts and Letters Club of Toronto where he was featured in a solo exhibition of his books and printmaking in the spring of 2019. Walker’s latest book-length project presents the iconic life of Hollywood silent-film star Mary Pickford in a suite of 87 wood engravings.

The Hunting of the Snark

Lewis Carroll (with engravings by George A. Walker), Porcupine's Quill

Lewis Carroll’s classic nonsense poem The Hunting of the Snark follows a band of oafish misfits as they undertake an epic quest to catch a fantastical creature known as the Snark. Led by the bombastic and bewildering Bellman, the crew sets out with enthusiasm, a blank map—and no clear idea of what they’re doing.

This newly illustrated edition contains all the delightful darkness and droll sarcasm of Carroll’s original text; and yet, wood engraver George A. Walker cleverly reimagines the tale through his illustrations, drawing from the world of presidential politics to recast the story. In so doing, Walker creates an irresistible commentary on contemporary America, memorializing a baffling political climate and providing a sharp new way of looking at a familiar poem.