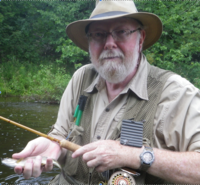 For human beings, forging a real connection with nature can be essential to our understanding of not only ourselves, but our place within the planet on which we live. Spending time in the quiet isolation of tall trees, running streams and singing birds acts as a restorative elixir, re-fueling us with purpose and inner peace. Everyone achieves this feeling in different ways, but for many, the centuries-old sport of fly fishing is their method of choice.

Author Robert Reid and illustrator Wesley W. Bates understand this better than most. Their new book, Casting Into Mystery (Porcupine's Quill), is not just a celebration of fly-fishing and the rich history of art it's inspired, but a deep meditation on our relationship with the natural world and how North America's waterways sustain us mentally, physically and spiritually. Bates's painstaking wood engravings beautifully flesh out Reid's prose, working together to create a unique and powerful love letter to the sport they love, and to the wonder and mystery of the environment in which they enjoy it.

We're thrilled to have Robert at Open Book today to discuss the origins of the book, the importance of "the two Vs" in writing nonfiction, and how fly-fishing brought him closer to a deep and profound relationship with nature.

Casting into Mystery is a sympathetic fusion of word and image. Wesley Bates’s engravings are not illustrations in a conventional sense, but a visual narrative that complements and enhances my text. Think of a pair of fishing companions sharing the same stretch of river. Many chapters started as blog postings which I began writing after retiring from newspaper journalism. When I started playing with the idea that the postings might form the basis of a memoir, I thought about working with Wesley. When we finally met up again after many years, he asked whether I would consider partnering on a book. It was exactly what I had been contemplating. It was a case of piscatorial/creative synchronicity. We are both fly anglers. It is a passion for me because it reminds me that I’m inextricably connected to nature. When fly fishing I’m not in nature, I’m of nature. The river in which I’m wading flows through the arteries and veins of my body. I am river, river is me.

The book’s title is intended to be interpreted literally. The book is about mystery. Most of us spend considerable time seeking answers to fundamental questions. Fly fishing has taught me that it’s enough to open my body, spirit and imagination to the embrace of mystery. When I’m standing waist deep in a river with a bamboo fly rod in my hand, I’m casting an artificial fly, often lighter than a whisper, into mystery. I’m one small finishing nail in the architecture of mystery. This process, which unfolds in the pulsating moment, not only encompasses nature in all her abundant splendor - including rivers, fish and insects -but the elements that make up the practice of fly fishing. Time and mortality, joy and sorrow, fulfillment and loss, art and spirituality are integral to the mystery.

Most of my research was done by wading rivers or canoeing lakes. Every time I pick up a fly rod the experience is new, unlike any previous experience in specifics. The unexpected is the norm. Then there was reading from the rich literature of fly fishing that predates Izaak Walton’s The Compleat Angler (first published in 1653), the most reprinted book in English with the exception of the Bible and Pilgrim’s Progress. More great books devoted to fly fishing were published in the last century, into this century, than at any other time in the long history of fly fishing, which extends back to before the birth of Christ.

I have no specific writing routine. I customarily have a cup of coffee, sometimes a glass of craft beer or dram of single malt within reach. Being retired, I write at any time; however, I most often write late at a night, a holdover from my university days in the 1970s. Following is a description of my writing space as recorded in Casting into Mystery:

‘Seated at the computer in my kitchen office, I can look out on a knoll bordered by a line of conifers. Just out of sight is a gully that protects a copse where I routinely watch a leash of foxes cavorting at dawn. I see cottontails, skunks, raccoons, groundhogs and squirrels. I can turn in my chair during wintertide and watch birds at the feeder—chickadees and nuthatches, juncos and cardinals, blue jays and grosbeaks.

When I raise my eyes from the keyboard, I can gaze at a print of a painting of a fly fisherman at eventide by Russell Chatham; a print of a fly fisherman casting from an Adirondack guide boat by Winslow Homer; a quartet of salmon flies inspired by patterns designed by Carrie Stevens; an engraving by Wesley Bates of a fly fisherman in a pastoral stream accompanied by a silhouette of a dry fly; and, most special of all, a photo of [my sons] Dylan and Robertson in a boat at dusk, proudly showing off their catch of smallmouth bass. This gallery of angling art and artifact is a source of deep delight when, like an evening hatch, I wait on that elusive right word.’

I seldom, if ever, get discouraged during the writing process. As a professional journalist for four decades, I grew accustomed to writing on demand. Discipline trumped inspiration. For most of my career I reviewed concerts and theatrical performances under intense deadline pressure. If the creative well temporarily runs dry, I grab my fly rod and angling gear and hit the water to refresh and replenish.

Great works of non-fiction are defined, in my mind, by the Two Vs—vision and voice. Vision is a blend of reporting acumen and imagination. Voice is the result of how a writer weaves the manifold narrative threads into the textual fabric. Although not specifically non-fiction, Norman Maclean’s autobiographical novella A River Runs Through It is the greatest single literary work devoted to fly fishing. Although fly angling is an important thematic and structural element, to say it is about fly fishing is like saying Moby Dick is a study of whaling or Walden is a primer for building a cabin in the woods.

I continue to write essays about the art of fly fishing, based both my personal experiences and the literature, music and visual and performance art inspired by the activity, both historical and contemporary.

Robert Reid is a writer, journalist, and avid angler whose career in journalism spanned forty years. Reid got his start writing for newspapers in Strathroy, St. Thomas, Timmins and Simcoe before he landed a position covering arts at the Brantford Expositor, and later, the Waterloo Region Record. He reported on a wide range of cultural activities from London to Hamilton to Toronto, and served as a lecturer, literary judge and arts commentator, as well as a writer, interviewer and associate producer on a couple of syndicated arts programs produced for television. He was the first non-fiction writer to be appointed Writer-in-Residence at the University of Waterloo. Since his retirement, Reid has continued to write about his passions—art and culture, malt whisky, dining and travel, and especially fly fishing—on his website at www.reidbetweenthelines.ca.

‘Every time I leave the world of work, family and community to wade into a river with fly rod in hand, I enter a sacred space that sometimes finds expression in the written word.’

In Casting into Mystery, writer Robert Reid and wood engraver Wesley W. Bates—avid anglers, both—put ink to paper in homage to the venerable sport of fly fishing. Through text and image, they recall with fondness the ‘company of rivers’ each is grateful to know, providing a glimpse inside a sporting culture teeming with literature, art and music.