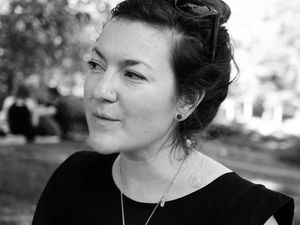 As conversations around feminism continue to evolve and gain momentum, there are still plenty of detractors and critics of the movement for gender equality. Simply being a woman with a public presence can make someone a target for criticism and abuse. Women with public profile often see the same put-downs levelled against them repeatedly. One of those phrases, "feminist killjoy", has been adopted and reclaimed by activist and academic Sara Ahmed, who gleefully self-identifies as a feminist killjoy while working for women's rights.

Erin Wunker builds on Ahmed's project in her new books of essays, Notes from a Feminist Killjoy: Essays on Everyday Life (BookThug). Smart, witty, varied, and inviting, the essays touch on everything from female friendship and motherhood to rape culture and community building.

We're thrilled to welcome Erin to Open Book today to speak about Notes from a Feminist Killjoy as part of our Lucky Seven interview series.

Erin tells us exactly what "joys" a feminist killjoy is, in fact, killing, how becoming a parent changed her writing life, and the books that have affected her most deeply.

I was on a panel about feminism at a conference called Avant Canada at Brock University. My talk was about Sara Ahmed’s figure of the feminist killjoy. After my talk Jay MillAr of BookThug came up and talked to me…and effectively asked me when I would be writing a book. I laughed. And then, after several months, one baby (mine) and a lot of patience (from BookThug and my editor Julie Joosten) I did in fact write a book.

The central claim of my book is that we need feminism, and specifically the figure of the feminist killjoy who calls out the so-called “joys” of patriarchal culture (like sexism, racism, homophobia) if we are to make that more equitable world we keep talking about. The only part of the book that I knew would be there when I began writing was this term “feminist killjoy” coined by the UK-based writer and theorist Sara Ahmed. Her thinking and writing in public—specifically on her blog—has been vital to my own thinking about how to live ethically in the world.

I began the project—namely the thinking about it—in 2015. I wrote the majority of the book between January and May of 2016.

Not much. I need my laptop and fifteen minutes. I wrote the majority of this book while our daughter was an infant and my partner and I were both teaching university full-time. We had virtually no child care, so I wrote this in fragments of time when the baby was napping or I was up ridiculously early. Indeed, this kind of life-shift has altered how I write. I used to feel I needed a big desk, a big room, and a large stretch of time. That would be nice, but it isn’t realistic for me right now. Discovering I could write with almost none of these things was a surprise—and not an altogether unpleasant one!

This book ended up being far more rooted in memoir than I had expected or intended, and I struggled with how vulnerable and risky that genre feels.

A great book is, I think, one that can alter or enter your worldview and profoundly affect you—be it by making you laugh, feel empathy, or change your thinking entirely. There are so many books that do and have done this for me. Corregidora by Gayl Jones, I Know Why the Caged Bird Sings by Maya Angelou, Infinite Citizen of the Shaking Tent by Liz Howard—all of these books continue to affect me.

In addition to being managing editor of the feminist academic blog Hook & Eye: Fast Feminism, Slow Academe and working with Canadian Women in the Literary Arts I am starting work on a book about growing up with a history buff for a father. I’m trying to think through the ways that history—a fidelity and fascination with the past—has permeated my consciousness since I was a kid.

Erin Wunker is Chair of the Board of the national non-profit organization Canadian Women in the Literary Arts (www.cwila.com) and co-founder, writer, and managing editor of the feminist academic blog Hook & Eye: Fast Feminism, Slow Academe. She teaches courses in Canadian literature and cultural production with a special focus on cultural production by women. She lives in Halifax with her partner, their daughter, and Marley the dog. Notes from a Feminist Killjoy is Wunker’s first book.

Notes from a Feminist Killjoy: Essays on Everyday Life

Following in the tradition of Sara Ahmed (the originator of the concept “feminist killjoy”), Wunker brings memoir, theory, literary criticism, pop culture, and feminist thinking together in this collection of essays that take up Ahmed’s project as a multi-faceted lens through which to read the world from a feminist point of view.