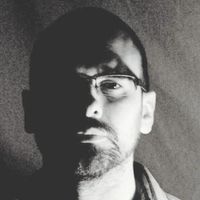 Tense, dark, unexpected, and revelatory -- there's a lot of atmosphere and emotion packed into Rolli's The Sea-Wave (Guernica Editions), and its slim footprint, at 168 pages, makes it all the more impressive. Telling the story of a disabled 12-year old girl kidnapped by a disturbed elderly man, The Sea-Wave is strange and fragmented, but deeply incisive, asking us to confront our own complicity in the way these people have been treated. Necessary Fiction reviewed the novel, concluding "The Sea-Wave is, like its namesake, a thing outside time to be enjoyed again and again".

We're pleased to speak with Rolli today about The Sea-Wave as part of our Lucky Seven series. He tell us about how these characters helped him navigate a painful period of his life, the process of writing a modular novel, and the most essential ingredient of the writing process.

Five years ago... I was having a difficult time. My life has been a series of hard times linked together by softer ones. That’s true of many people.

The difficulty back then—it was a question of sensitivity. When I encountered someone who was suffering, I’d suffer. I’d feel sick. I’d become sick, sometimes. The two main characters in The Sea-Wave live with severe disabilities, physical, psychological. They experience, too, the suffering of being misunderstood or mistreated—a greater suffering, that.

When I finished writing The Sea-Wave, I felt somewhat better. I’m still sensitive, over-sensitive. But I don’t drown anymore. I learned how to swim.

Possibly. Probably. I write ... directly, intuitively. But a question may emerge: “Is there an end to suffering?” There may even be an answer.

The Sea-Wave is a modular novel. It was assembled from interchangeable bits and pieces. I was re-sequencing them right up to the very end. I’d still be rearranging them, I’m sure. If the book hadn’t been published.

I took me a year to write The Sea-Wave. It took three years—and over two hundred rejections from agents and publishers—to sell. The finished book is only 20,000 words but it’s distinctly a novel, a flash novel, a novel of sorts, rather than a novella. It’s a fuller story. But there’s no filler. Trim the fat off a 90,000 word novel and you’ll be left with 20,000 words, no more. When there’s nothing to skim, you have no choice but to read every word. And I do write to be read.

Writing is discouraging. It’s a discouraging business. The processes... Submission, publication, promotion. The horrors of award season. When you’re writing, that’s all in the future, but it leans back on you, it’s a tilting wall. Sooner or later, it collapses.

I open a thousand books a year, but close 90% of them after only a few pages or chapters. I’m mortal, so I don’t bother reading a less than exceptional book through to the end. If a book can keep me stimulated and engaged to the last page, it’s a great book. My favourite is The Life of Samuel Johnson. I’ve read it a dozen times. I hope to read it a dozen more.

Nothing. I have no forthcoming books, no contracts. I have thousands of ideas... It’s a matter of digging back out of the rubble. It might take a few more months or years. It might take forever. You just never know.

A flash fiction novel, The Sea-Wave details the aftermath of the kidnapping by an elderly and emotionally damaged man of a severely disabled, wheelchair-bound, unusually bright, depressive 12-year-old girl incapable of speech. The novel consists of the girl's entries in her diary-like memorandum book, entries which relate her own, surprising thoughts on her kidnapping, family, and disabilities, in addition to her verbatim transcriptions of the old man's monologues, which appear to reveal, in fragments, the details of a very specific and unusual period in his life.