What is a nonnet, you might ask? For that we turn to Aaron Giovannone, author of The Nonnets (Book*hug). Nonnets are Giovannone's own creation — nine-line poems into which he packs hilarious comedic moments, as well as deft glimpses of heart. Poet Adam Dickinson praised the collection, saying, "The Nonnets takes us on a hilarious and unpredictable journey. If these amazing poems don’t make you think about how wondrous and doomed we are, if they don’t make you laugh and cry, then you are dead inside."

It's a smart, wildly creative collection and we're excited to welcome Aaron to Open Book today to talk about where and how he wrote it and where he's writing lately, as part of our At the Desk series.

Never one to take the traditional route, Aaron opted to review all the spots he's been writing lately. See what rated a sad 1.5 stars (and what merits a half star) and transport yourself mentally to the incredible spot that clocks in at five well-earned stars. From Calgary folding tables to the terraced hillsides of Italy, you'll be as inspired as Aaron was after 'touring' these spots.

Aaron Giovannone: A Review of My Recent Writing Spaces

During grad school I wrote in my one-bedroom apartment in Sunnyside, Calgary. There I worked at a folding table, like a card table but a bit sturdier, my roller chair mired in the thick carpet. I sat in front of a patio door that looked out on a patch of grass and a seven-foot wooden fence. Here is where I beganwriting The Nonnets. A poem that was cut from the collection last minute actually describes me moving out of this apartment when the landlord jacked up the rent: It’s late, and I’m packing books in boxes, watching Fellini’s Nights of Cabiria. I tear up at a scene where the heroine is praying at a shrine, shouting out among the din of pilgrims’ voices, “Let me change my life!”  Watching her, I thought of all the people I had failed. Anyway, the poem’s tone wasn’t quite right so I didn’t keep it. I give this writing space four out of five stars.

My next writing space was in St. Catharines, Ontario at my mother’s glass-surfaced dining room table. The wallpaper was dark and tastefully patterned. A statue of a mountain lion lurked on a pedestal. The cats’ food dishes were lined up in a corner of this room, so as I sat there typing, I was rarely alone. Tuna, the oldest and fattest cat, rubbed his cheeks on the edge of my laptop screen, shaking the image and leaving his fur clung to it electrostatically. It was a time of some despair. A close family member died. Maybe a hundred job applications disappeared into a void. Although I was lucky to be safe and comfortable at my mom’s place, I felt like a loser to be living there again. I wrote most of The Nonnets then. Three out of five stars.

When I found work, I moved to Penticton, B.C. My apartment building was directly across from the beach on the shore of Lake Okanagan, which looked great on Google maps. But what I didn’t know – because I had to rent this place over the phone – was that my ground-level unit was on the other side of the building and only had a view of the parking lot. Sitting in my roller chair at my rickety table, I never once opened my blinds because of the stream of people walking by. I slept on a blow-up mattress that year. One morning the landlord, a man my own age who had inherited the building from his father, knocked on my door to scold me for tracking sand from the beach into the hallway. He had seen me do it on the CCTV. This is where a first draft of the The Nonnets was finished. Two stars. 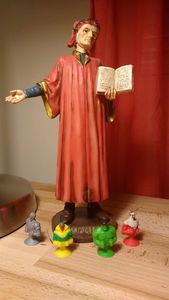 Then the God of Love smiled upon me.  Where we live in Calgary now I have, for the first time ever, an office! There’s a futon, always in bed mode for spontaneous naps, and a sturdy wooden desk with thick metal legs. On a corner of the desk I keep a statuette of Dante, a gift from a dear friend. The window, exactly at desk height, looks out onto a balcony and a bunch of tall poplars, and behind them the downtown skyline, most visible in the frigid winter when the trees have lost their leaves. The Nonnets received their final edits here. Five stars.

I began writing this essay on a plane, the typeface shrunk to microscopic dimensions to hide it from seatmates who might be curious to know if I was writing about them – which I was. I fantasized about the people in first class in their luxury pods one by one having red wine spilled on them. This writing space gets one and a half stars: the half star for the extra legroom of the exit row. 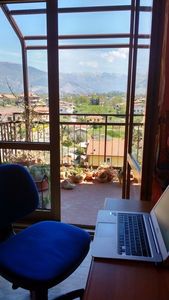 I’m finishing this essay at a little desk, a single bed behind me, in my aunt’s condo in Castelliri, Italy. Everything is stone in here, so I wear slippers, a toque and a sweater, and even though I’m cold I open the balcony doors to let in the air redolent of wood smoke. When I talk to my love on the phone, she asks about all the birdsong in the background. It’s very loud!  Sparrows peck among the potted cactuses on the balcony, and v-shaped swallows zip this way and that. Maybe we hear a nightingale, but I only think that because of the Keats poem, and Keats died in Rome, and Rome is nearby. The green valley rolls out with houses in white, pink or yellow and the occasional crumbling stone dwelling. Olive orchards, palm trees, cherry blossoms. Terraced hillsides and the Ernici mountains on the horizon, now veiled in mist. I am starting another book now.

Aaron Giovannone’s poems have been published widely in journals across Canada and the US, and his nonfiction has appeared or is forthcoming in The Walrus, Brick, and Vice. Originally from St. Catharines, Ontario, Aaron has a Ph.D. in English Literature and Creative Writing from the University of Calgary and has lived in Italy, including a year as a visiting scholar at the University of Siena. He is the author of a previous collection of poetry titled The Loneliness Machine. Aaron splits his time between Calgary and the Okanagan Valley, where he teaches literature and writing at Okanagan College.