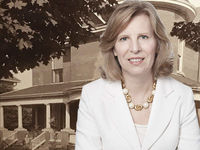 After spending three full books with her characters, it is a bittersweet triumph for Lynne Golding to see them off in the final instalment of her Beneath the Alders trilogy: The Mending (Blue Moon Publishers) builds on the stories Golding started in The Innocent and continued with The Beleaguered.

The series began with Jessie Stephens and her family's mysterious ex-communication from their Brampton church. No one would tell Jessie why it happened, and her quest for the truth set her on a long path that culminates in The Mending.

In the new novel, we find an older and wiser Jessie coming of age just as the Spanish flu releases its deathly grasp. The epidemic backdrop makes The Mending feel deeply relatable to our current time, and Jessie continues as a timeless and compelling protagonist. The Mending wraps up her story, returning to its deep-set historical Brampton roots, and gives both readers and Jessie the resolution they need.

Lynne joins us today to speak about completing the final chapter of her epic story, appropriately as part of our Long Story interview for novelists. She tells us about the real life Jessie who inspired both the character and the series, what it was like immersing herself in research about the Spanish flu epidemic in the early days of COVID-19, and how she found the perfect final epigraph in a university yearbook.

And for historical fiction buffs, you can get a further behind the scene glimpse into Lynne's research process and how her family history features in the series in her video about the Beneath the Alders trilogy.

The setting of the novel chose me, rather than the other way around, given that it is based on the real-life experiences of my great aunt who inspired the series. My aunt was born and raised in Brampton, Ontario, which is the setting of most of the series. But in The Mending, the protagonist leaves Brampton to attend Victoria College at the University of Toronto. It was so interesting writing about student life in 1921 and seeing how different it was from my experience at that same college sixty years later. Back in the day, Victoria College undergrads commenced each school day—and there were six school days per week, not five—in the chapel. My aunt’s course load included twenty-seven hours of in-class instruction per week, spread out over nine courses (including English, four sciences, two languages, and religious knowledge). No dances were permitted on the grounds of Victoria College. Vic students had to dance elsewhere or entertain themselves on special Saturday nights by promenading through the halls of Old Vic—walking in their finery, parade-like, arm-in-arm with a partner, to the accompaniment of a live band.

Of course, Jessie—the protagonist—is always my favourite character. That being said, each book has other characters that I love. Some readers will be glad to see a return of the zany Aunt Lil, who is another favourite and who has a fairly big role in the first two of chapters of The Mending. My favourite new character is a young man by the name of Henry Percival Montgomery Moorehead. I hope that from this multisyllabic name, you discern that he is British and from a “good” or once “good” family. His character is different from any of the others in the series. He is droll, witty, irreverent, impetuous, romantic, and in a way that makes him popular with other young people in the bootlegging ’20s, mischievous. I had a lot of fun writing his dialogue.

Historical fiction books involve a lot of research. Likely, the most research I did for The Mending related to the 1918 Battle of Amiens. While The Mending opens after that battle occurred, characters in the book return to Amiens in 1926, and a mystery about one of the book’s characters is resolved. I spent hours and hours reading about that battle, understanding troop movements and tactics, the operation of field hospitals—casualty clearing centres and surgical centres and more. My research was corroborated in three ways. First, I hired Bryan McClure, a PhD candidate in History at Western University, who read the relevant chapters and gave me some great insights. Second, I called upon my personal experiences visiting Amiens in 2013 and walking the streets, fields, and cemeteries described. Finally, I came upon my aunt’s actual diary of her 1926 trip to the area. She was twenty-three years old at the time. It was incredibly moving and fun—she was twenty-three, after all—reading her actual words.

Probably the most memorable moment was reading and writing about Spanish flu in the first few months of 2020. The Mending opens in late August 1918. In an earlier draft of the book, the narrative moved pretty quickly from that time until a later time in 1919 with barely a nod to the Spanish flu. My editor, Allister Thompson, who is really a very agreeable guy, took some exception to this. One could not write about that period of time, he said, and not talk about the effects of the Spanish flu. My problem was that I had no specific story line to advance in that period of time, and I didn’t think there was anything new to communicate to the readers, as I had previously described living in a state of quarantine in The Innocent, the first book in the series, in connection with an outbreak of scarlet fever.

But I never like to ignore Allister’s advice, and so in January 2020, I asked my researcher, Colleen Mahoney, to look into some specific aspects of the virus, and I returned to the library, rereading the newspapers from the fall of 1918. What started out as drudgery became a real fascination. Canada was not yet experiencing COVID-19, but Wuhan, and then Italy, and then Iran and other countries were. Reading about their experiences, I was struck by both the apparent similarities and differences between how the Spanish flu and COVID-19 affected society. It suddenly became exciting to weave the Spanish flu into the backdrop of two chapters—one of which was entirely new.

The Mending is the third book in the Beneath the Alders series. Each has an epigraph. I have to say that each is less lofty than its predecessor! The Innocent, the first book in the series, included a short poem by T.S. Eliot. It spoke to me about the importance of exploring the past to understand our current circumstances. In The Beleaguered, the epigram is an excerpt from the 1914 Christmas editorial of The Conservator, the local newspaper. About the Great War, it is insightful, inspirational, and transcendental. The epigram in The Mending is the eight lines that appeared next to my aunt’s photograph in the 1925 edition of the Torontonensis, the yearbook of the University of Toronto. While the lines constitute very bad poetry, they form an accurate description of my loyal but headstrong aunt.

Lynne Golding was born and raised in Brampton, Ontario. She obtained a bachelor's degree in History and Political Science from Victoria College at the University of Toronto before studying law at Queen's University in Kingston, Ontario. She is a senior partner at the international law firm Fasken Martineau DuMoulin LLP where she leads their health law practice group. Lynne lives in Brampton, Ontario, and has three grown children. Lynne is also the winner of the OBPO's What's Your Story? Short Prose and Poetry Competition.

As the world settled the treaty to the recently concluded war-to-end-all-wars, and as the Canadian government repatriated the brave members of her expeditionary force, Canadians sought two things above all else: an end to the beleaguered state suffered during the war, and a return to the innocence that preceded it.

In the final book of the Beneath the Alders trilogy, Jessie Stephens discovers that neither is entirely possible. Set between 1918 and 1931, Jessie comes of age on the heels of the Spanish flu epidemic, in a time where skirt hems rose, marriageable men were in short supply, and compliance with temperance laws fell. As modern medical, dental, and training programs strove to restore the lives of the war's injured, Jessie is a student at the University of Toronto, a mourner in the fields of France, a tourist in European capitals, a love struck guide in the hills of Caledon, and a devoted family member in her home town of Brampton. As she uncovers the secrets that have beset her since her earliest days, and others of more recent discovery, Jessie, her family, and her community begin to mend.