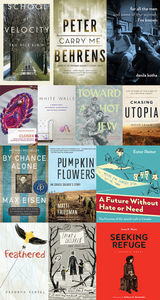 From Mordecai Richler to David Bezmozgis and countless writers in between (and upcoming), Canadian literature has benefited from the rich voices of Jewish writers since its inception.

To honour that legacy and its vibrant continuation, the Koffler Centre of the Arts presents the Vine Awards for Canadian Jewish Literature every year. Both books by Jewish writers and books by non-Jewish writers that have significant content related to Jewish history, tradition, or issues are eligible.

While the 2017 shortlists are stacked with acclaimed names, some particularly notable nominees include Matti Friedman, whose Pumpkinflowers was also nominated for the RBC Taylor Prize, the Writers' Trust Hilary Weston Nonfiction Prize, and the BC National Award for Canadian Non-fiction; Governor General's Literary Award winner Peter Behrens; and Trillium Book Award finalist (and past Open Book writer-in-residence!) Danila Botha.

The 2017 jury is comprised of author and musician Bob Bossin, author Ami Sands Brodoff, and author Cary Fagan. See below for the full lists and further details.

Each winner will receive a $10,000 prize in recognition of their achievements. There is also a poetry prize, awarded once every three years, which will next be presented in 2019.

The Vine Awards for Canadian Jewish Literature are made possible by the Lillian and Norman Glowinsky Family Foundation to support Canadian Jewish literature, a tradition they established with the original awards in 2004, building on the founding of the Canadian Jewish Book Awards, created in 1988 by Adam Fuerstenberg.

The winners will be announced at a reception in on October 3, 2017.