It's finally time! This weekend, The Word on the Street takes over the Harbourfront Centre in Toronto for one of the city's favourite – and biggest – literary gatherings. Packed with free events all day long on Sunday, September 22, 2019, the festival features author readings, panel discussions, writing workshops, programming for kids and teens, books and magazine sales direct from the publishers, and lots of tasty food options. Guest author Elizabeth Greene summed it up when she called The Word on the Street "the literary world at its absolute best". And the additional WOTS+ programming on Saturday, September 21 adds even more reasons to get excited for the weekend – check out the website for full scheduling information.

We're excited to gear up for WOTS weekend by talking to Communications Coordinator Rebecca Diem, who handles marketing strategy and social media for the festival.

She tells us about the behind-the-scenes intricacies of programming the "smorgasbord" that is the Vibrant Voices of Ontario stage, what the future holds for The Word on the Street, and her favourite festival memory (hint: there are puppies involved!).

The Vibrant Voices stage celebrates our province’s literature. What is special about this particular stage and how is it programmed? 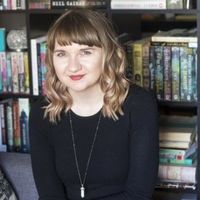 We start in the wintertime by visiting as many publishers that have their headquarters (or even a rep!) in the city as possible. Once we learn about the fantastic new lists that are coming out of Ontario houses, we start to put together book themes and author pairings that would work well, and make inter-publisher connections. We try to include a diverse range of authors and works and have a smorgasbord of genres on this stage to whet as many literary appetites as possible—Vibrant Voices is a bit of the best of everything!

One of the recent changes to The Word on the Street is the WOTS Plus programming and expansion beyond the single-day festival. What prompted these changes and what are you most excited about with the expansion?

For 30 years, our festival has managed to pack everything into a single day. But we’ve grown, and our audiences have grown up with us – diversifying our programming is an important part of ensuring we stay relevant to book lovers of all ages.

Last year we tried something new that was made possible by exploring the potential of our new home at the Harbourfront Centre: WOTS Plus, a full day of additional programming presented in partnership with the Toronto Public Library and Diaspora Dialogues. These panels gave us a chance to go deeper into some of the most important discussions our city and community are currently having.

This year, we’re expanding on that effort with a keynote address, THE CITY IMAGINES, followed by a panel discussion on urbanism and the arts with some of Toronto’s brightest minds to look at how cities can foster a thriving cultural sector.

We also launched our Book of the Month program in 2019, and host a monthly #WOTSAuthorChat on Twitter so that our audiences can engage with our featured authors year-round!

How did you become involved with the festival yourself? What is special about working on WOTS?

I first came to The Word On The Street as an attendee in 2012. I was living in the city over the summer and a friend recommended it to me, as she knew I had started writing my first book. I planted myself in the Wordshop Marquee tent for most of the day, absorbing everything I could learn from the panellists and authors. I even met a few authors who were really encouraging and had great advice for finishing my first draft.

2015 was my first year as an exhibitor. I had print editions of my first two novellas in the Tales of the Captain Duke series, a nice lace tablecloth and a display featuring a heavy wooden crate, portholes, business cards, and a little vase of flowers. My parents drove down the city to help me out and we had a really nice celebration afterward. I felt like I had come full circle!

I was back with my third book in 2016, and my fourth in 2018, and in early 2019 I was absolutely delighted to accept a position with the team responsible for making it all happen. I love being part of amplifying the incredible authors and programming we have at WOTS!

Do you have a favourite memory of the festival, either as someone working with The Word on the Street or as a guest?

I think my favourite memory of working here so far is the day the Books & Puppies video came together. I was looking at ways to promote the 30th Anniversary of The Word On The Street while highlighting our mandate of reading and literacy, and my colleague Maya mentioned the Toronto Humane Society’s Reading Buddies program. We joked about bringing in an author to read to the dogs alongside the kids.

I developed a creative brief to bring THS on board, along with some talented videographers and composer. Then we pitched the opportunity to Sharon & Bram’s team, and I think my heart nearly fell out of my body when they said yes. I’m really, really proud of the video, and that we captured so many of the best moments of the day, including Bram reading to the bunnies, Sharon singing lullabies to soothe nervous pups, and the big sing-along we had together with the families and THS staff.

How do you think The Word on the Street Toronto fits into the cultural life of the city? How do you view the festival’s role?

I think our 30th anniversary gives us a real opportunity to reflect on the role we play in our community. I’m new as an employee, but I’ve had a longer history as one of the beneficiaries of this festival, as an aspiring writer and independent exhibitor. The Word On The Street is a hub for community-building, a place where authors, publishers and book lovers of all ages come to celebrate and connect with each other.

As a free festival, we’re also one of the most accessible entry points into the literary community, and we’re expanding on those efforts with one of the largest marketplaces for independent authors and publishers. I see our festival’s role as one of amplification. There are so many great Canadian and Indigenous authors and books to be discovered!

When you think about The Word on the Street in five or ten years, what do you envision for and hope for in terms of the festival’s future?

We want to continue as a multi-day festival with year-round events--we’re even looking at the possibility of hosting some of our #WOTSAuthorChats live and in person! We also want to expand our donor base, so that we’re more resilient in our funding structure and can prioritise goals like achieving 100% ASL interpretation coverage for all our stages or increasing the honorariums for our featured authors.

There are also some important conversations happening now, online and off, about the shifting landscape of Canadian literature and some long-overdue changes. I want our festival to remain relevant to our community, and that means being adaptable and flexible in a shifting landscape. I want to explore new and alternative forms of storytelling that are current to audiences today. I’d also like our festival to play a role in helping authors like Cherie Dimaline, Amal El-Mohtar and Zalika Reid-Benta to become household names.

The Word On The Street is a place where people of all ages and backgrounds come together in the spirit of wonder and discovery to celebrate the written word. I think that’s a great story, and I’m thrilled to be part of telling it.

The Word On The Street is a is a national celebration of literacy and the written word. Each September, in communities coast to coast, the public is invited to participate in hundreds of author events, presentations and workshops and to browse a marketplace that boasts the best selection of Canadian books and magazines you'll find anywhere. The Word On The Street takes place in Toronto at the Harbourfront Centre (235 Queen Quay West) on Sunday, September 22, 2019 and features dozens of fantastic author readings, kids programming, author signings, food tents, and much more. Further festival programming through September can be found on The Word on the Street website.

Rebecca Diem is a writer, music lover and nerd. She is the author of the indie steampunk series Tales of the Captain Duke. An avid bookworm, Rebecca was honoured to receive a ‘Nose in a Book’ award from her elementary school librarian. Somewhere between reading Virginia Woolf and Neil Gaiman she began to write her own stories, and has no plans to stop.

Rebecca manages communications, marketing strategy, and social media for The Word on the Street Toronto.