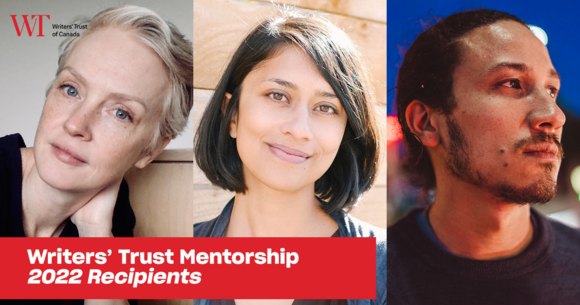 Today is a day that may come up in future interviews and acceptances speeches for Megan Elizabeth Morrison, Raksha Vasudevan, and Shō Yamagushiku, the three emerging writers who have been awarded this year's prestigious Writers' Trust mentorships.

The three unpublished writers have de facto been declared as amongst the most promising in the country, with three acclaimed authors selecting them for personally tailored, five-month mentorships.

Each of the mentors was effusive about their choice. Kellough called Yamagushiku's work "impressive... by turns accessible and evasive, lucid and obscure... personal, familial, and historical.” Mazigh praised Morrison's manuscript as "standing out as original and intriguing" and said she looks "forward to building a literary relationship where we can both learn from each other." And Rustad hailed Vasudevan’s work as "rich with potential to be a modern classic memoir... Her deeply reflective and extraordinary writing perspective feels current, crucial, and original."

The mentorship programme supports aspiring authors by pairing them with established Canadian authors, whose guidance is given through close one-on-one instruction. Mentees are given feedback and encouragement to improve their craft and prep works in progress for potential publication. It is sponsored by RBC Emerging Artists, which supports organizations that provide the best opportunity for artists to advance in their projected career paths and which also funds the Writers' Trust acclaimed RBC Bronwen Wallace Award for Emerging Writers.

Speaking on the mentorship programme, Writers' Trust executive director Charlie Foran said that "the value of an established literary artist sharing their knowledge with an aspiring author is immense [and] to forge a genuine connection, especially as we come out of pandemic isolation, provides real opportunities for a career to be changed for the better."

The programme has no age requirements for emerging writers; any writer with at least one literary magazine or journal or published anthology but who is not yet published in book form is eligible to apply. The final selection is up to the mentors, who each choose their own mentee based on writing samples. Mentees receive $2,500 to help finance time to write during the mentorship.