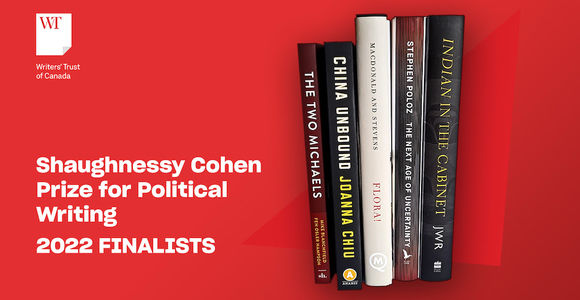 Today the Writers' Trust of Canada announced the 2022 shortlist for the Shaughnessy Cohen Prize for Political Writing, named in honour of the Liberal MP who passed away at 50 years old in 1998 after collapsing in the House of Commons. Through the prize, Cohen is remembered for her outspoken commitment to her principles, including working on issues related to the environment, marriage equality, and criminal justice reform.

Past winners and nominees of the prize include some of Canada's most acclaimed nonfiction writers including Tanya Talaga, Carol Off, Jane Jacobs, Kamal Al-Soyalee, Naomi Klein, John Ralston Saul, Chantal Hébert, Margaret MacMillan, Tim Cook, and many more. The $25,000 prize has traditionally been presented at Politics & the Pen, a glittering gala fundraiser that has long been one of the highlights of the Ottawa social season for the political set, but which has been put on hold by the pandemic. May 17 will see the first in-person Politics & the Pen event since the beginning of the pandemic, back at its traditional Chateau Laurier setting, presenting the 2022 prize, which is sponsored by CN, to the winner as part of the evening's festivities.

The shortlist contains only one crossover with the Writers' Trust's two other nonfiction prizes, the Hilary Weston Writers' Trust Prize for Nonfiction and the Balsillie Prize for Public Policy, with Jody Wilson-Raybould having been nominated for the latter along with her spot on the Shaughnessy Cohen shortlist. The shortlist was selected by a jury composed of Ottawa journalist Charelle Evelyn, author and past prize finalist Jacques Poitras, and past Conservative Party of Canada deputy leader Hon. Lisa Raitt.

The mix of publishers is an interesting one, with two international publishers represented (Allen Lane, an imprint of Penguin Random House Canada, and HarperCollins), an academic press in McGill-Queen's, and two independent houses in veteran Toronto press House of Anansi and newer player Sutherland House, an all nonfiction press that was founded in 2017 by former National Post editor-in-chief Kenneth Whyte and which has published some controversial writers like Jon Kay and Conrad Black.

For more information on the shortlisted authors and their titles, visit the Writers' Trust website.