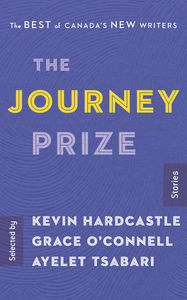 Selected by a three-member jury comprising award-winning Canadian writers Kevin Hardcastle, Grace O’Connell, and Ayelet Tsabari (the first two of whom are part of the Open Book team), the entire longlist of twelve stories will be published in The Journey Prize Stories 29, which will be available in bookstores on September 26, 2017. Two writers this year each have more than one story in the collection: Sharon Bala, with "Butter Tea at Starbucks" and "Reading Week" and Richard Kelly Kemick with "The Most Human Part of You" and "The Unitarian Church’s Annual Young Writer’s Short Story Competition". Each of The Malahat Review and The New Quarterly have multiple stories, with three a piece, and BC's PRISM International has two stories.

The $10,000 Journey Prize itself is the most signifi­cant monetary award given in Canada to a developing writer for a short story or excerpt from a fiction work in progress. The publication that originally published the winning story will also receive a $2,000 prize. 2017 is the 29th time the award has been presented. Previous winners of The Journey Prize include Yann Martel, Alissa York, Miranda Hill, Anne Simpson, Yasuko Thanh, and Timothy Taylor.

The 2017 Journey Prize Nominees are:

The Writers’ Trust of Canada will announce a shortlist of three stories on September 13. The winner of the 2017 Journey Prize will be announced on November 14, as part of the Writers’ Trust Awards event in Toronto.