When authors Christine Brubaker and Erin Brubacher departed on a 700km walking journey from Ontario to Pennsylvania, they weren't sure what they were going to find. Intending to trace the migration path of their Mennonite ancestors, the two women spent 32 days meeting and enjoying the hospitality of strangers, encountering lived experiences and worldviews that couldn't have been further from their own. The result of their travels was 7th Cousins, a critically-acclaimed stage production based on their photos, conversations, and writings from the trip.

With the publication of a new book, 7th Cousins: An Automythography (Book*hug), the two have translated their show into a multi-disciplinary published work, combining the original performance text with photo essays and contributions from collaborators Christopher Stanton, Andrea Nann, Kaitlin Hickey, and Erum Khan.

We're thrilled to have Christine and Erin at Open Book today, where they talk about the challenges of transforming a performance text into a book, how an inside joke got them through creative standoffs, and what the term "automythography" means to them. 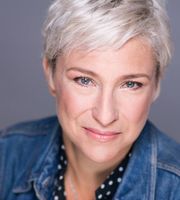 The central question of this project definitely became “How can we be together?” This is not only specific to Erin and me as co-travelers and co-creators of a performance (and now a book), but applies to our relationships with all of the people we met on our 700km walk, the collaborators we subsequently worked with, and is now an even larger guiding question for our audiences and readers. It was certainly not a question we started with or could even anticipate, though early on someone asked us if we thought it would be difficult spending that much time with one another. For some reason the import of that moment didn’t really land until much later - after the walk, after reflecting on all our recordings, notes and photos, after early attempts to craft the performance that became the book. I venture that it was probably only when we were at the verge of giving up that this ‘guiding question’ emerged, and we could understand it as the frame that could hold us on this journey of walking and of making.

We started writing by listening to and transcribing some of the 70-plus hours of audio recordings we had made of ourselves talking to each other while walking the 700km over those 32 days. The very first draft of our performance text was very different from what you’ll see in the book. It was exclusively a verbatim collage and, funnily enough, using only those real utterances rang false. We had edited ourselves into caricatures. We ultimately decided to only use those recordings as sporadic interjections in our retrospective storytelling.

This book was going to be a hybrid from the start, with a piece of documentary theatre at its core. But it was the kind of documentary that relied on memory, so of course it was going to change with time. What would be the content also fluctuated: we knew the book would contain a newly edited version of our pre-existing performance text, but we had so many other ideas about how to communicate our project — through images, non-fiction essay, editorial writing, and other documents of process. Elements got cut and added along the way. These choices shaped our story.

The primary challenge was translating a performance into a book and trying to give the reader a parallel experience to that of an audience member. This is different from the goal of most play publications, which is to take the text as received by the actors and directors who will stage it and put it into public print.

Interestingly, I think this is fully linked to our central question of “How can we be together?” The other side of this coin is “How do we make together?”  We started out knowing we wanted to make something, but what that live experience would look like was unclear - even as we kept giving ourselves performance challenges and goals. It took a long time to see it through to something that felt right, and on that journey there definitely difficult points. We created a term that functioned as a truce cue: “vortex.” When we’d find ourselves in a spiraling disagreement, where neither of us would give up, someone would call, “vortex!” Inevitably, the other would laugh. I think it became a short hand for acknowledging our shared stubbornness.

Christine and I have both worked extensively in theatrical writing processes, mostly from the position of director/dramaturge. I also write auto-fiction, or what I call poetic non-fiction, which certainly approaches memoir but is shrouded in an uncertainty between fact and fiction. For the essays in this book, we felt we really had to be accountable to the accuracy of our descriptions. With the central performance text, the term “auto-mythography” means that the “truth” about things that happened relies on our recollection of it; there is some witting and unwitting mythologizing involved.

I think we got a lot of that anxiety out of the way by performing the show. Performing as yourself can be very vulnerable and exposing. You have to face yourself in front of people. It’s embarrassing — which is, of course, delightful for the audience if you as the performers are humble about it and willing to laugh at yourself. But the writing and rehearsal process was particularly sensitive. Our directors Christopher Stanton and Andrea Nann really deserve a lot of credit for patiently navigating our egos and fragility. But publishing a book offers a new set of anxieties because, compared to a live performance, it feels so permanent. You want to make sure you get it “right” because once it’s out there, it’s out there.

I’m working on a very ‘freely’ adapted Henry V by Shakespeare called “Henry G20”. This piece is a large outdoor performance and speaks to the conflicts between the protestors and the militarized police force during the G20 Summit in Toronto in 2010. I am in the early stages of development with playwright Michael O’Brien on a ‘science performance adventure’ that explores a fascinating period in our earth’s history, the Cambrian Explosion. And this spring, I’m directing a new play by Anna Chatterton about cowgirls in the rodeo circuit. That’s one’s extra fun.

I’m directing a new, large scale, show about climate change in Germany this spring, so I’m preparing for that. I’m also presently working on my first long form book. It’s another hybrid: a novel governed by the logics of poetry, auto-fiction and photography. I find it really useful to have a solo project as a counterpoint to my collaborative work. I’m finding it more and more essential, especially as a director/producer who is often responsible for facilitating the (wonderful) creative contributions of so many other people; it’s really restorative to have a private pursuit I can just quietly work away at in my own way.

Erin Brubacher is a performance-maker, writer and facilitator of multidisciplinary projects. Her work has taken her across Canada to venues such as The National Arts Centre (Ottawa), The PuSh International Performance Festival (Vancouver) and Canadian Stage (Toronto), and internationally to Scotland, France, The Netherlands, Germany, Mexico and the USA. As a theatre director, Erin works with writers, performers, musicians, choreographers, visual artists, and other makers to collaboratively create new works. Directing projects include the award-winning productions of Concord Floral (Brubacher/Spooner/Tannahill), Kiinalik: These Sharp Tools (Buddies in Bad Time Theatre), and Noor (Generous Friend/The Aga Khan Museum). Erin found her artistic foundation in photography at Mount Allison University in New Brunswick and holds an MA in International Performance Research, with distinction, from the University of Warwick and University of Amsterdam. She is the author of  the poetry collection, In the Small Hours (Gaspereau Press) and a new work of fiction, forthcoming with Book*hug. She makes her home in Toronto. www.erinbrubacher.ca

Christine Brubaker is a director, actor, dramaturg and educator. She is the winner of two Dora Mavor Moore Awards for Performance, the 2014 Gina Wilkinson Prize for Direction, and the 2016 Ken McDougall Award for Emerging Director. Christine has worked across Canada on the small and large stages and specializes in new work and adaptation. She directed the world premieres of The Horse and His Boy and Wilde Tales at the Shaw Festival, Elena/Eli Belyea’s Smoke at Downstage Theatre, Elle for Theatre Passe Muraille, and the Canadian workshop premiere of Suzanna Fournier’s antigone lives*. Christine is the creator of Henry G20, a large-scale outdoor performance and contemporary adaptation of Henry V that speaks to global capitalism and the protest movement premiering in Toronto in 2020. She is on faculty at University of Calgary’s School of Creative and Performing Arts and splits her time between Alberta and Toronto. She is an alumnus of the National Theatre School’s Acting program and Michael Langham Program for Classical Direction at the Stratford Festival. www.christinebrubaker.com

A stranger asked if we were walking to learn how to work and be together. This was certainly part of it.

In July 2015, Erin Brubacher and Christine Brubaker traced the migration route of their Mennonite ancestors by walking 700 kilometres from Pennsylvania to Ontario. Along the way they were hosted by a series of people with whom they had next to nothing in common. They were welcomed into strangers’ homes and treated as family. On their journey through the American Bible Belt they encountered folks with religious and political beliefs very different from their own and learned to question what conversations to enter and how far to take them. They accomplished this and so much more while navigating their own relationship and the challenges of being with another person, on foot, for 32 days.

7th Cousins: An Automythography documents the walk itself and the performance text they generated afterwards. Included throughout are photo essays from the journey and commentaries from their collaborators Christopher Stanton, Andrea Nann, Kaitlin Hickey, and Erum Khan.